THE 10-YEAR-OLD boy at the centre of a controversial deportation order has been granted permission to stay in Ireland, the country of his birth, following an online campaign organised by his primary school.

Eric's mother, Leena Mei Mei Xue, arrived in the country 12 years ago, and was unsuccessful in numerous attempts to be granted leave in the country.

When Eric's mother was issued with a deportation order last year, the order applied to Eric as well, despite him being born in Ireland, having spent the entirety of his 9 years here and having never been to China before.

As Eric is not a Chinese citizen, deportation would have left him without access to health or education rights, something St Cronan's Primary School in Bray were quick to point out when they organised a Change.org petition demanding that Ireland's Department of Justice allow Eric to remain in Ireland.

"We in St. Cronan's School appeal to the Minister for Justice, Mr. Charlie Flanagan, to revoke the deportation order made in respect of Eric Zhi Ying Xue," the petition, created in October 2018, read.

"Eric is a 9 year old boy in 4th Class in St. Cronan’s BNS Bray, who was born in Ireland but is not an Irish citizen and has never been out of the country. If he is forced to go to China, where his mother was born, he will have no access to China’s health or education systems because he is not a Chinese citizen. This is a humanitarian issue - Eric urgently needs your support."

Over one year and almost 70,000 signatures later, Eric and his mother were given some news-- the deportation order had been lifted and the family would be allowed to stay in Ireland. 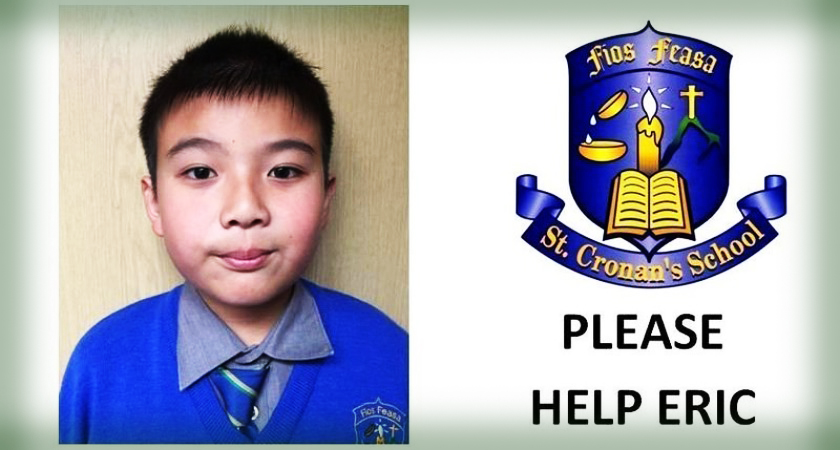 "Thank you so much for helping to change a small boy’s life!" Eric will be allowed to stay in Ireland after an online campaign by Eric's school and community.

Principal of St Cronan's, Maeve Tierney, updated the petition on Tuesday to thank everyone who had signed, supported and spread the word, as she wrote:

"I'm getting in contact with fantastic news. Eric is safe from deportation and his future in Ireland is assured. What an amazing Christmas present for him! Thank you so much for helping to change a small boy’s life."

Ireland's laws state that just because a child is born here, it does not mean they are automatically an Irish citizen, after 79% of people voted against automatic entitlement in a 2004 referendum.

This means that Eric's story is not unique-- something Ms Tierney addressed in the update, along with a new plea to assist other children facing deportation to countries where they may not have any rights.

"Since we started this petition, we’ve learned that there are children and families just like Eric all across Ireland," the update reads.

"We need your help to make sure that ALL undocumented children and young people know they are safe in Ireland.

"The Taoiseach Leo Varadkar has committed to introducing a solution, but time is of the essence: this needs to happen NOW, before the next general election.

"The Taoiseach needs to hear from as many of us as possible so he knows he has the support of voters and the public.

"Please show your support for other children like Eric by sending the Taoiseach an email now. It's all set up and easy to do, just follow the link."

The school signed off on the update  by thanking the public again "from Eric’s friends, teachers and all at St Cronan’s".