US PRESIDENT Donald Trump has said his historic summit with North Korean leader Kim Jong Un on Tuesday went "better than anybody could have expected", as the pair held a joint signing ceremony in Singapore.

Mr Trump said the North Korean denuclearisation process would be starting “very quickly”, as he and the Supreme Leader co-signed an as-yet-unspecified document.

Speaking through a translator, Mr Kim described the talks as a "good prelude to peace", adding that his half-day of meetings with the US President had been "historic" and the two had "decided to leave the past behind".

“The world will see a major change. I would like to express my gratitude to President Trump for making this meeting happen,” Mr Kim said.

It is the first ever face-to-face meeting between a sitting US President and a North Korean leader, and pictures of the pair's inaugural handshake have already sent shockwaves across the world of politics. 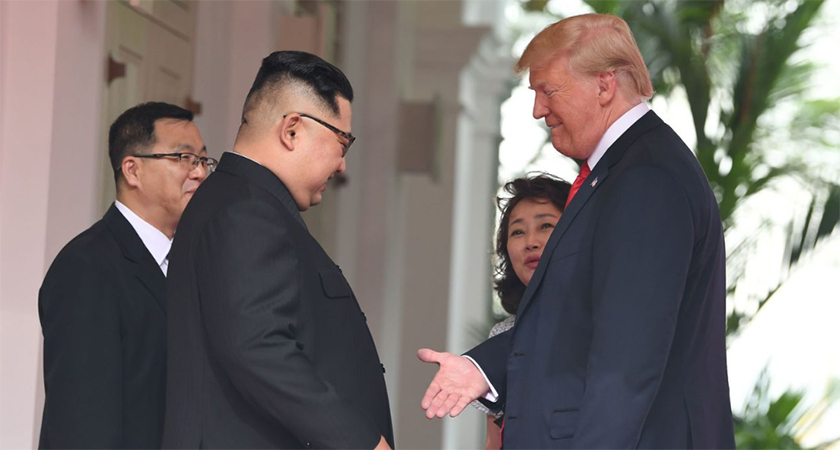 Neither Trump nor Kim provided details on their agreement following several hours of meetings centered around the denuclearisation of North Korea.

But should a diplomatic breakthrough be made by the two leaders, it could bring lasting change to the volatile security situation in East Asia and beyond.

Comparisons have already been drawn between the Trump-Kim Summit and former US President Richard Nixon's visit to China in 1972 - which led directly to the emergence of modern China on the world stage.

The extent to which Kim might be willing to do away with his treasured nuclear armoury remains to be seen, but the signs from the last fortnight at least have been positive.

Sanctions on North Korea would remain in place until a substantial denuclearisation process began, Secretary of State Mike Pompeo said: "If diplomacy does not move in the right direction ... those measures will increase."

Earlier, Trump and Kim shared warm words and a handshake previously thought to be impossible as they met at Capella Hotel on neutral Singapore's resort island of Sentosa.

The two men shook hands for several seconds with Mr Trump reaching out to touch the North Korean leader on his right shoulder, before the pair sat down to begin their historic one-on-one meeting.

"Nice to meet you, Mr President," Kim said with a smile in a rare display of his English language skills.

With cameras of the world's media trained on them, the unlikely duo built an initial aura of friendliness as the US President gave his counterpart a thumbs-up.

Mr Trump said: "I feel really great. We're going to have a great discussion and will be tremendously successful.

"It's my honour and we will have a terrific relationship, I have no doubt," he added.

Mr Kim replied: "It was not easy to get here. There were obstacles but we overcame them to be here."

The encounter was unthinkable just months ago, when fears of war mounted amid missile tests by North Korea and shared verbal insults.

Mr Trump will no doubt see the meeting as a legacy-defining moment in his Presidency, but any successful negotiations over North Korea's denuclearisation are likely to be a process of months rather than weeks.