THE match had long since finished yet in a corner of the Ernst Happel stadium, the visitors were in full voice. They were only 3000 strong in a crowd of more than 48,000 but still they were making themselves heard.

“We’re going to top the group,” they sang, drowning out the words of the Irish captain, Seamus Coleman, whose interview with RTE radio was drawing to an end.

“As we all know, we didn’t have a great record in Vienna,” Coleman was saying. Had he been cynical enough, he would have been perfectly entitled to add. “Nor has our away record been too hot anywhere.” Yet perceptions as well as statistics are beginning to change.

Over the course of the last nine years – since Steve Staunton’s reign came to an end – Ireland’s form on the road has improved dramatically. Twenty-seven times they have left Dublin Airport for World Cup or European championship qualifiers (and play-offs) since 2007 and on only four occasions have they lost. More to the point, they’ve began to take some notable scalps, Austria on Saturday being the best of them.

Before then, though, 11 victories and 11 draws were posted from the 26 away days sandwiched in between Staunton’s last road trip to Prague in September 2007 and Saturday’s win in Vienna. Now while the vast majority of those wins have been against the whipping boys of the European game (Gibraltar, Andorra et al), the draws in competitive internationals have been impressive - Italy, France, Germany, Serbia, Bulgaria, Russia, Slovakia, Sweden, Bosnia, Montenegro and Wales all held on their home turf.

“What we do in Dublin will decide things,” O’Neill said before Saturday's win. Yet history has shown that campaigns, as well as eras, have in actuality been defined away from Lansdowne Road. Jack Charlton’s reign kicked off with Liam Brady’s last minute equaliser in Brussels, five months before Mark Lawrenson’s goal upset Scottish sensibilities in Glasgow. 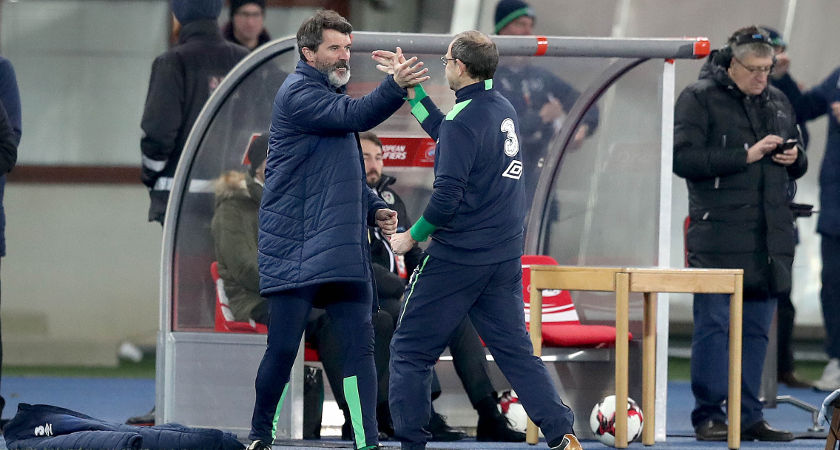 Ireland Manager Martin O'Neill celebrates with assistant manager Roy Keane at the final whistle [©INPHO/Ryan Byrne]
Qualification for Italia 90 and USA 94, meanwhile, were secured in Valletta and Belfast; and who can forget how qualification for Euro 92 was blown in Poznan? Don’t mention last-gasp capitulations to Mick McCarthy or Brian Kerr, though? The scars of Skopje 1999 or Tel Aviv 2004 have yet to heal for either man. Leading as they entered stoppage time on those trips, they exited with draws.

Which was why Ireland’s fans could have been forgiven for fearing the worst when the ball landed on Marc Janko’s head in the 93rd minute of Saturday’s World Cup qualifier in Vienna. Standing well inside the six-yard box, all Janko needed was a clean connection to turn a 1-0 defeat into a 1-1 draw and downgrade O’Neill’s status from tactical genius to blundering buffoon.

For that’s how fickle the managerial business can be. McCarthy, remember, was lampooned on the back of what happened late on against Croatia and Macedonia – when first Davor Suker and then Goran Stavreski – scored stoppage time goals in the Euro 2000 qualifiers before Kerr got it in the neck when Abbas Suan struck a 90th minute Israeli equaliser in 2005.

Yet under O’Neill, good things have happened in stoppage time – that late winner in Georgia from Aiden McGeady, those equalisers against Germany and Poland from John O’Shea and Shane Long – and now this, the miss of the 21st century from Austria’s Janko.

Does this make O’Neill a lucky general? “No, it can’t always be a coincidence,” said Darren Randolph, his goalkeeper, who was also thinking about Robbie Brady’s winner against Italy and Daryl Murphy’s equaliser in Belgrade. Seven times under O’Neill, game-defining goals have been scored in the last 10 minutes of matches. Six of those have been scored by Irishmen (Eden Dzeko’s equaliser cancelling out Brady’s lead goal in the fog in Zenica, being the exception).

“When you do it a couple of times, it's in the back of your head, that you can do it again,” Randolph said of Ireland’s capacity to score late. “People used to say that about Man United about how if you can keep the pressure on all the way to the end, you will get what you want. We now have that belief we'll be able to do it again, because we have done it before. We’ve learned.”

Evidence of this was visible in Vienna in the moments preceding Janko’s miss. With the clock running down, the quality of the decision making and ball retention – particularly by Jeff Hendrick and Jon Walters was notable – and was such a sharp contrast to the final seconds of the 2013 qualifier in Lansdowne Road, when Paul Green’s indecision allowed Austria rescue possession and initiate the move that ended with David Alaba striking his equaliser.

This time there was no Austrian escape – because this time there is a streetwise edge to everything Ireland do. “What we’re trying,” Roy Keane said during the Euros, “is to change the mentality of Irish football.” And they’re succeeding.

Over the course of the last 13 months, victories have been recorded against Germany, Bosnia, Italy and now Austria – impressive results especially when you consider that in only one of those games, the match against Italy in Lille, Ireland’s opponents dominated possession.

Saturday was a prime example of that. Just 40 per cent of the play was controlled by Ireland – yet significantly, when they did have the ball, they used in shrewdly, the winning goal stemming from a mixture of intuition and invention, or, to borrow one of Eamon Dunphy’s favourite sayings, moral courage.

It was significant that the creator of the winning goal was Wes Hoolahan – because he has been often been overlooked by O’Neill (Saturday being just the fourth away qualifier he has started under the Derryman) – even though he has been at the heart of those stand-out wins in the O’Neill reign, delivering the pass for Brady’s goal in Lille and here for James McClean’s winner in Vienna.

Without him, Ireland are an admirable team rather than a particularly good one. And while we aren’t snobbish about the presence of heart and desire within any side – the challenge for O’Neill is to add a little excitement and quality to his team. Should he do so then who knows where this adventure may end?