Portugal's striker Cristiano Ronaldo takes off his shirt for a young fan after they ran onto the pitch after the FIFA World Cup Qatar 2022 qualifying round Group A football match between Ireland and Portugal at the Aviva Stadium in Dublin on November 11, 2021. - The match ended 0-0. (Photo by Paul Faith / AFP) (Photo by PAUL FAITH/AFP via Getty Images)

An 11-year-old girl's night was made last night as the brave Dubliner managed to get Cristiano Ronaldo's shirt, as she took to the Aviva Stadium pitch on Thursday night.

Ireland held Portugal to a 0-0 draw on Thursday night in a game where the Irish team kept Ronaldo scoreless. The biggest roar from the crowd didn't come from Ronaldo ending up on his arse, it was for young Addison Whelan, who got the superstars shirt. 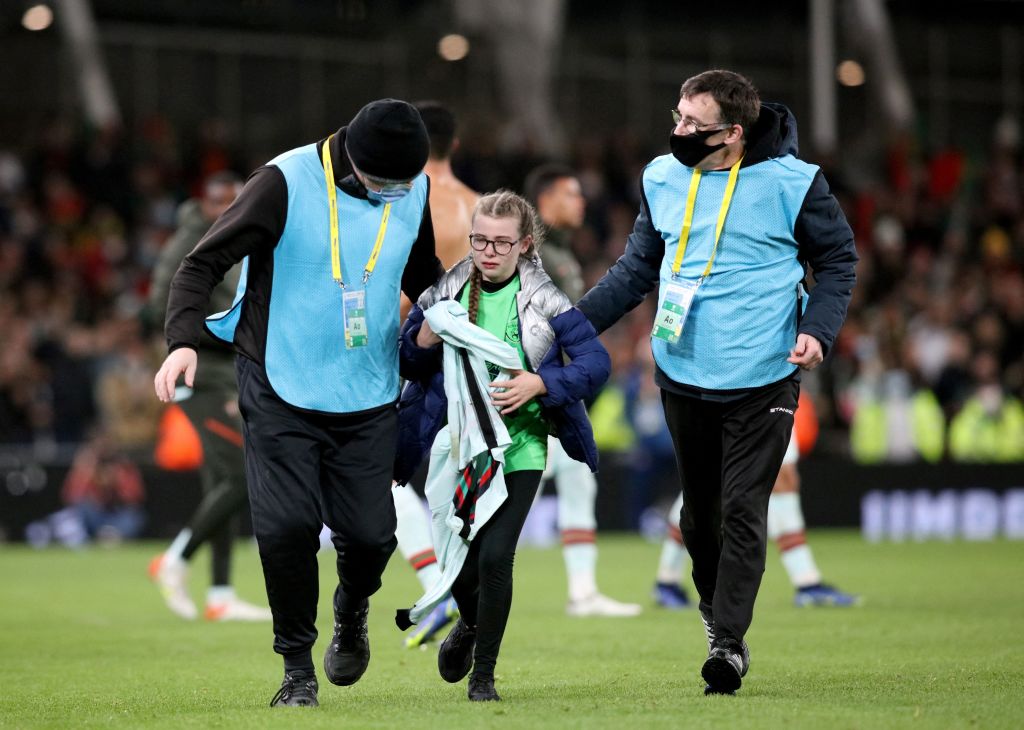 After the ref blew the whistle Whelan took to the pitch to have words with Ronaldo.

A steward tried to stop the brave girl's attempts at meeting Ronaldo, but the Manchester United forward ordered the steward to leave the girl alone. He gave Addison a hug and even gave Whelan his match worn shirt.

“First of all, I jumped over the barrier,” Addison said of her daring dash towards the five-time Ballon d’Or winner. “Then I sprinted onto the pitch but there were security guards running behind me and two coming from the other corner. I just sprinted.

“When I saw the other two, I ran towards the halfway line so I could swerve around them. They caught me and I was just screaming Ronaldo’s name.

“He turned around and he saw me and he was telling them to leave me. He came over to me. I was in shock and I was crying and I said ‘can I have your jersey please? I’m a big, huge fan.’ He was saying ‘are you okay?’

“When my dad saw him taking off the shirt, his face was in shock. I was like ‘oh my god, this is my dream and it’s finally coming true.’

Addison, who plays for Shelbourne under-13s, explained that Ronaldo said “I appreciate that” when told of her admiration for him and also revealed that she has yet to try on the jersey.

A dream come true for Addison and one that she will never ever forget.