Irish Foxes: Former Leicester duo David Connolly and Dave Langan on their time at the club

WHEN David Connolly signed for Leicester City from West Ham in 2004 the club was in deep financial trouble.

Leicester had been relegated the previous season but the then Ireland striker figured the team had the talent to make a quick return to the Premier League.

So he chose a contract in the midlands over the pursuit of an offer from Sunderland.

Thinking back now, he remembers that the end of training signalled the mass exit of players to far-flung homesteads around the country.

It was a different Leicester from the Leicester of today, who are united and embedded in a city intoxicated by the team’s success having gone five points clear at the top of the Premier League table with nine games to go.

“At that time the players were pulled from all over the country,” said Connolly, reflecting on the 2004-5 season.

“Lots of players didn’t live in the locality and as soon as training was over, everyone was quickly in their car to get home, me included.

“It didn’t quite work out. It was an aging team and we had lots of really good players, Premier Leaguer players. But maybe on the wrong side of the age required.

“We had about three or four managers too. Mickey Adams left, we had Howard Wilkinson for a bit and Craig Levin and Rob Kelly took over as caretaker so there was a huge transition all the time.

“That’s what you find with Championship clubs. Once success seems to be slipping out of your grasp you sack managers and change managers and that can be a real vicious cycle. That was a period that Leicester was in then.”

The cycle of Irish players who have lined-out and managed Leicester City is a small but significant pool.

Frank O’Farrell led the club to an FA Cup final in 1969 before taking over from Matt Busby in Old Trafford, while Martin O’Neill provided competitive consistency through his five seasons in charge [1995-2000].

Along with Connolly, other notable players include Keith Gillespie and Neil Lennon, but theirs was a different Leicester; earnest, game, but without the necessary tools to compete for the title.

Still, Connolly made a significant contribution.

A proven goal-scorer, he found the net a remarkable 32 times in 29 games for Excelsior in Holland and his goals-per-game ratio in the Dutch second tier in 2001-02 is still celebrated in Rotterdam.

It was a touch that returned 17 goals in 44 appearances for the Foxes.

He is part of a small group of players who have scored hat-tricks for Leicester and he remembers hitting three against Stoke in the league.

Significantly for Leicester, it was the kind of return that led to Wigan coming in with a £2million offer for the striker. Cash strapped, the club accepted and the money gave their finances a much needed fill-up.

“They couldn’t turn that down and it was much-needed money for that club at that time,” he said. “There was an awareness of the financial crisis and I was the top scorer in the Championship at the end of the window. Leicester couldn’t turn down a couple of million quid.”

Typically, Dave Langan’s career is associated with Derby County, Birmingham City and Oxford United, but he enjoyed a brief sojourn under Brian Hamilton in Leicester in 1987. 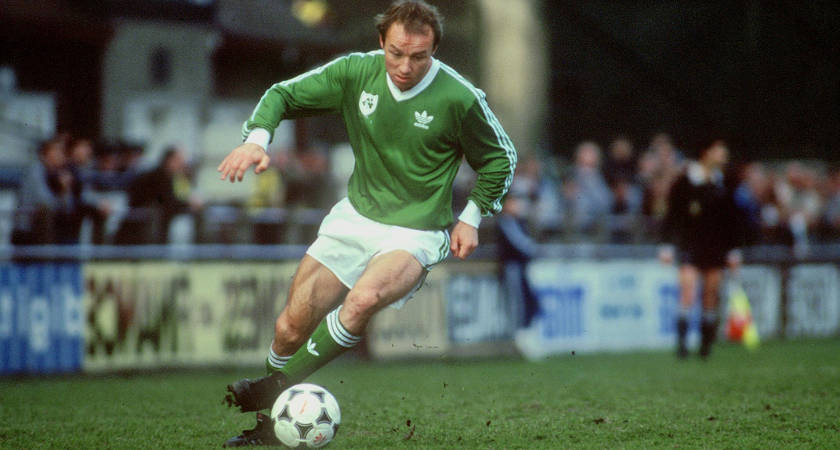 Dave Langan in action for Ireland against Uruguay in 1986 [Picture: Getty]
He remembers a closeness between the club and the community and the influence of a club legend.

“Steve Walsh was our centre-half and think he ended up our top goalscorer,” he laughed. “We just didn’t have the players they have now, especially the front two, but I remember the club investing a lot in the supporters. We went to a lot of functions and the club wanted us to go everywhere to integrate with the supporters which I loved because in those days you could do that. It was just a very friendly club and they would do anything for you.

“I was there for a loan. Oxford sent me down for a month and I done another when Brian Hamilton was manager and he got sacked. He was going to sign me permanent then David Pleat took over and he didn’t want anything to do with me.”

Langan’s memories are more dated and though Connolly left Leicester more than 10 years ago he still can’t shed connections.

A youth coach with Millwall, he’s currently working on his pro license alongside Craig Shakespeare, who is Claudio Ranieri’s assistant at Leicester City.

“You hear snippets about how things are done and he has adapted,” he said. “Ranieri seems to have bought into the English traditions so he hasn’t come in and said: ‘I’m going to do it the Italian way!’

“I think he has realised quite wisely, things like giving them two days off a week, which is traditional kind of stuff.

“Tactically, Ranieri has got it spot on with the players he has got and that extra athleticism and physicality that they have got to go and hurt teams towards the end has got them so many points.”

Like everyone, he has been captured by the story of a club he knows well and as an only recently retired striker, he’s derived great joy in the goals of Jamie Vardy, who was playing for non-league side Stocksbridge Park Steels FC as recently as 2010. 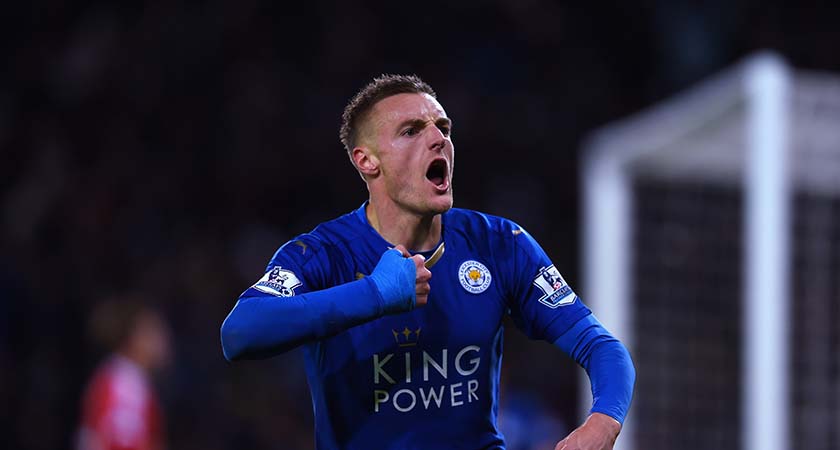 But he says the late great rise of the lower league player is not unprecedented.

“Stories like this are brilliant, that’s what everyone loves football for,” he said. “When I was at Watford, and I had just made my debut for the first team, we’d just signed Kevin Phillips from Baldock Town for about £10,000 and we both ended up playing in the first team together.

“The difference now is that clubs are consciously setting aside budgets for people to go and look at non-league. Players still slip through net, they mature at different ages and maybe they need more time.”

So with the season about to enter the ‘championship rounds’, do the former players believe Leicester City are capable of causing the greatest of all Premier League upsets?

“I like to think so, because they haven’t spent money and they have grafted all season with what they have,” said Connolly. “It would be a really fairytale ending.”

Similarly, Langan recognises their ability to get over the line, but admits the pressure will be intensified ahead of their favourable run-in.

“You’d have to fancy them with the run-in they have,” said Langan. “But it will all come down to how they handle the pressure in the last four or five games.”