HAMILTON, NEW ZEALAND - JUNE 29: Bundee Aki of Ireland presents an Ireland jersey to the family of the late Sean Wainui before the match between the Maori All Blacks and Ireland at FMG Stadium on June 29, 2022 in Hamilton, New Zealand. (Photo by Hannah Peters/Getty Images)

IRELAND LOST their opening game of the 2022 tour in New Zealand to the Māori All Blacks in Waikato. Tries from Gavin Coombes and Bundee Aki wasn't enough in a 32-17 defeat during the early hours of Wednesday morning.

Before the game Aki presented the Maori with an Irish jersey in memory of the former Maori All Blacks player Sean Wainui, who died aged 25 last year.

Ireland was never expected to hit the ground running in their opening game with so many changes, but Andy Farrell will be sweating on the fitness of several of his players, who went off injured. 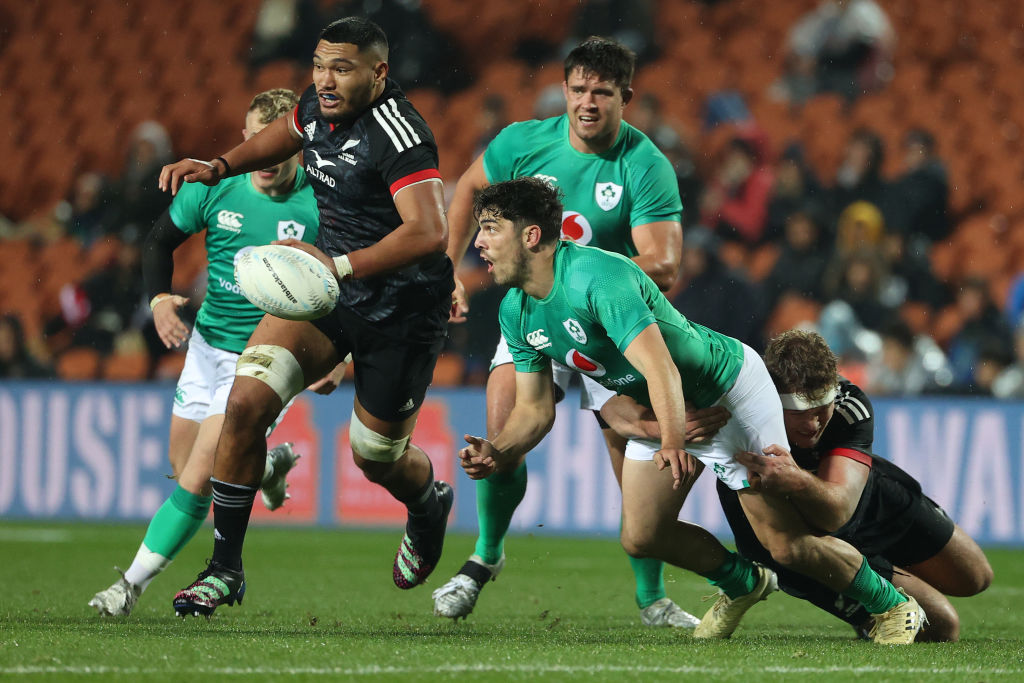 HAMILTON, NEW ZEALAND - JUNE 29: Jimmy O’Brien of Ireland (C) is tackled by Ollie Norris of the Maori All Blacks  (L) during the match between the Maori All Blacks and Ireland at FMG Stadium on June 29, 2022 in Hamilton, New Zealand. (Photo by Fiona Goodall/Getty Images)

Jeremy Loughman was taken off in the opening two minutes for a HIA. The Munster man was then replaced by Leinster's Cian Healy. Loughman passed his HIA and played on until 41 minutes, where he was again replaced by Healy.

Healy went down with knee injury on the 71 minutes, James Hume's leg injury meant he was replaced by his Connacht team-mate Mike Lowry,and fullback Jimmy O' Brien also hobbled off the pitch.

Ireland's opening try came from Connacht centre's Aki. Ireland scored early on from a set piece at the lineout, when Aki touched down under the posts after good work from Coombes.

Coombes scored Ireland's other try in the second half. Leinster's Ciaran Frawley was on kicking duty and scored two conversions and a penalty in the game.

Ireland's next game will be on the 2nd of July against the All-Blacks in Eden Park, Auckland (KO: 8.05am)

A positive second half performance but it's defeat to the Māori All Blacks in Waikato.#TeamOfUs | #MABvIRE pic.twitter.com/CzhykYG4Hu