SEVEN years ago Rory McIlroy led the field from start to finish at Hoylake to seal the Claret Jug.

Seven years on, is he further away than ever from returning to the summit of the golfing world?

That win in the 2014 Open Championship was accompanied by the PGA Championship – his last major victory, putting him two behind Nick Faldo and three behind Harry Vardon as the most successful European golfer of all time.

At the age of 25 he was the poster boy of golf as it moved into a post-Tiger Woods era but now, with a resurgence of top American golfers over the last few years, it’s proving harder and harder for the Holywood native to stamp his authority on the game.

His finishes in major championships have drifted, a second place at the 2018 Open is as close as it has been with only one top five finish – the 2020 Masters – in his last twelve majors before the trip to Royal St. George’s in Kent for the 149th Open Championship at the weekend.

Missing the cut at his home tournament in Portrush two years ago would have stung the most, desperate to be a contender on the North Antrim coast, McIlroy’s late heroics on the Friday afternoon were not enough to salvage the travails he experienced on the Thursday.

His even par score at Sandwich was symptomatic of missed opportunities and very public frustration.

For all the moments of brilliance the Down man is still very much capable of, throwing clubs around when things don’t go your way and criticising ‘diabolical’ pin positions does not inspire confidence and can at times come across as just petulant.

Contrast that with the unflappable focus of the eventual winner Collin Morikawa and the steady demeanour of Louis Oosthuizen who raced out to -11 at the end of the second round in the Kent sunshine.

The South African started the weekend playing with Jon Rahm and the defending champion Shane Lowry, the Clara native unable to repeat the heroics of Portrush two years ago but nonetheless posting a commendable score of -6 to finish in joint 12th place overall.

His birdie on the devilish sixth on Friday afternoon was a stand-out moment, landing a superb putt on a treacherous green to the delight of the gallery perched precariously on the dune behind. He had moments of class as the weekend ebbed but the Offaly man just couldn’t get enough of a run together to mount a challenge this time.

Whereas both Lowry and McIlroy were able to feed off a very supportive, extremely vocal Irish crowd last time around, things were a lot more subdued at what was a Covid-19 test event in Kent. 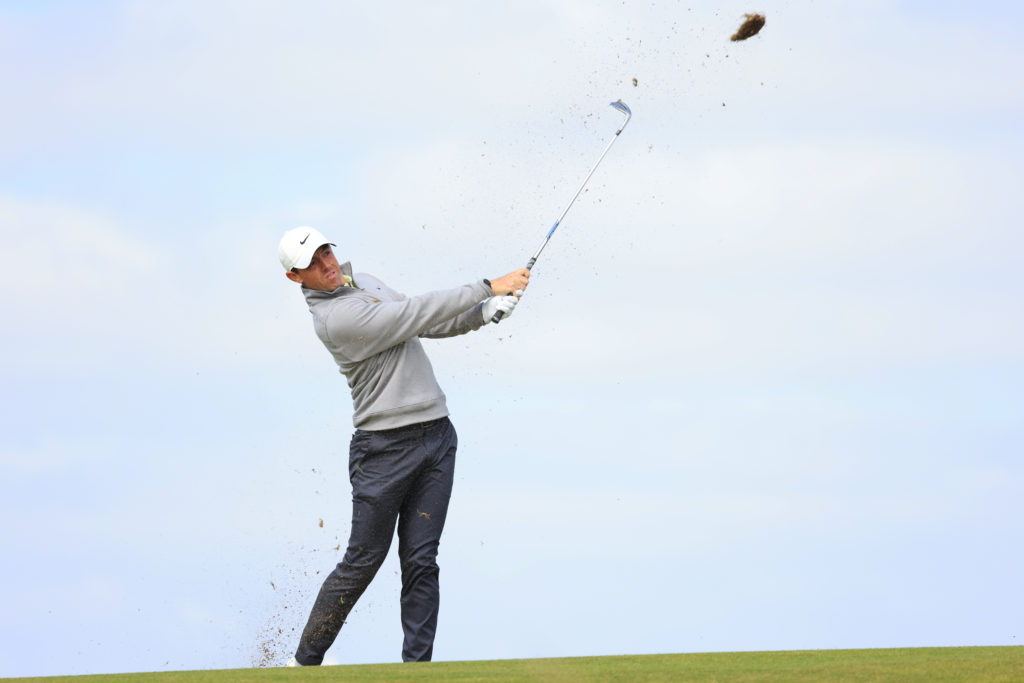 Bias aside, the lack of American and European flavour to the audience dented the spectacle compared to the 2019 Open – the lack of Irish voices depressingly noticeable at an event very much locally attended.

The R&A, much like every other sporting organisation impacted by the pandemic, will be banking on happier days with St. Andrews hosting the 150th Open next year and the traditional big crowds anticipated in Liverpool a year later.

The talk of Portrush returning as hosts once again, potentially in 2025, is very encouraging.

For Darren Clarke, the return to the scene of his emotional triumph a decade ago ended with the Tyrone man missing the cut on a score of +6.

The Ryder Cup captain Pádraig Harrington likely had more of an eye on his potential picks for Wisconsin in September as he carded a score of +4.

In the end the arm wrestle at the top of the leader board went to the Sunday afternoon wire with the American Morikawa producing a faultless final round of golf when it mattered most to post a score of -15, two shots ahead of Jordan Spieth and four ahead of Oosthuizen and Rahm, the former struggling on the final day as his playing partner pulled ahead of the pack.

For Rory McIlroy though, the wait for the fifth major continues.

He certainly has the capability, that’s never been in question – where the question mark lies is in the drive and mental doggedness necessary to be the best once again.