LIVERPOOL, ENGLAND - NOVEMBER 22: Liverpool goalkeepers, Alisson Becker (L), Adrian (R) and Caoimhin Kelleher (C) of Liverpool lay a wreath of flowers behind the goal in memory of former Liverpool player Ray Clemence ahead of the Premier League match between Liverpool and Leicester City at Anfield on November 22, 2020 in Liverpool, England. Sporting stadiums around the UK remain under strict restrictions due to the Coronavirus Pandemic as Government social distancing laws prohibit fans inside venues resulting in games being played behind closed doors. (Photo by Laurence Griffiths/Getty Images)

IRELAND'S CAOIMHIN Kelleher may have to give his starting spot back to Alisson Becker for Thursday's semi-final first leg against Arsenal.

The Cork keeper has been Liverpool's go to choice in the competition and it's usually reserved for second choice keepers, but the Brazil international could be drafted in for the first leg.

Becker has not played since 28 December since contracting Covid-19, but Klopp has said he may decide to bring him back in. 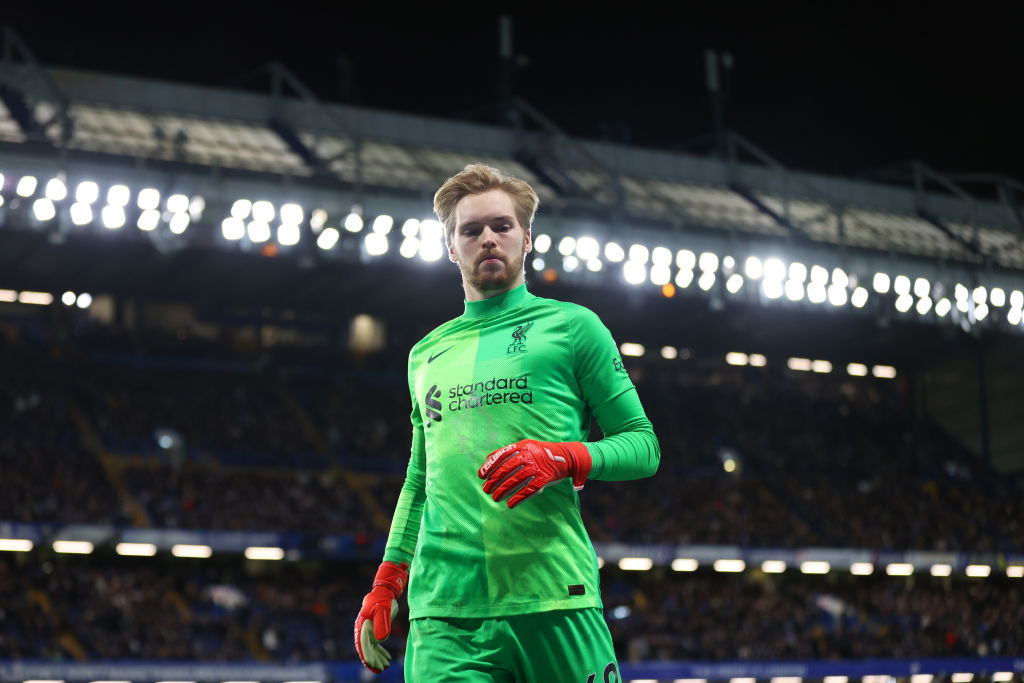 LONDON, ENGLAND - JANUARY 02: Caoimhin Kelleher of Liverpool during the Premier League match between Chelsea and Liverpool at Stamford Bridge on January 02, 2022 in London, England. (Photo by Catherine Ivill/Getty Images)

"Caoimhin is the goalkeeper for this competition but there is a chance that Ali will play tomorrow.

"I think he needs a game now just because of the situation with Covid and everything when he was out.

"We need to make sure that the boys have as much rhythm as they can get."

When his side were drawn against Arsenal in the last four, Klopp said he would happily concede home advantage and play a single tie at the Emirates Stadium.

Klopp has said he will give home the advantage of Anfield  playing a single tie at the Emirates Stadium.

Liverpool had to close their training ground for 48 hours due to a covid outbreak and several false positive Covid results were recorded.

Last season the competition went to a single-match semi-final and while Klopp is said to be keen on keeping this formar, he does not believe the EFL would be as keen though.

"Covid is around and with the amount of fixtures we have it is really tricky to fit them all in so a second semi-final is actually only good for one thing - it's for the EFL probably from a financial point of view," he said.

"But we should or could find a solution in the future, not for this year obviously because we didn't ask for it, no, just in general.

"I think all top-class people in football, especially the coaches, agree that we have to reduce the amount of games, in the long-term definitely.

"But a lot of people around try to do it the other way and that will definitely not lead in the right direction. It will not be the right outcome.

"So at one point we have to talk about these things but not for this game: we have two semi-finals and we are happy and hopeful that we can play both and that's what we want to do."