All-Ireland final review: The sweetest of victories for Dublin

It was obvious to Moynihan how ‘hurt’ Gavin still was after last year’s All-Ireland semi-final defeat to Donegal. It rhymed with another story former Dublin player Barry Cahill told at the outset of the summer.

When Cahill met a group of players last Christmas, he said some of them were still ‘in shock’ over the Donegal defeat. After being offered a trip to Australia as an-end-of-season team holiday, the players turned it down; they didn’t feel they deserved it.

Dublin clearly bottled all that hurt and pain over a long year and once they uncorked it on Sunday, it fizzed out and overflowed all over the field. It wasn’t a day for Champagne football but, in the circumstances, Dublin delivered a fitting kind of Champagne performance.

Dublin had nine scorers to Kerry’s five. They created six good goalscoring chances to Kerry’s one. Their play was so much better that, if the day was dry, this could have been a rout.

Dublin also confounded a lot of expectations when the rain came down. Everyone assumed that Kerry’s better skill-set would make them profit more in the conditions and that it would make it easier for Kerry to shut down Stephen Cluxton’s kickouts. 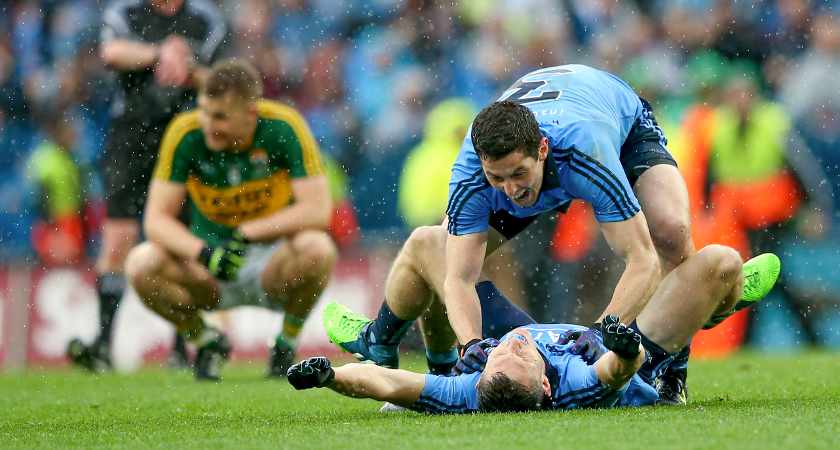 With Anthony Maher and David Moran in such good form, Kerry were expected to be able to build a far more solid platform at midfield on a rain-lashed pitch.

And yet Dublin won that battle in the middle third far more comfortably than anyone could have expected. The general impression was that Kerry did shut Cluxton down when winning seven of Dublin’s 18 kickouts. Yet the conditions did play a big part in contaminating Cluxton’s accuracy and Kerry only mined three scores from those seven kickouts.

Overall, Kerry only lost the overall kickout stat 18-19. Beforehand, Dublin would have settled for those numbers. There is also another way of looking at that whole area around Cluxton. Kerry did put him under pressure but they seemed so hung up on shutting him down that it affected even more critical parts of their structure.

With such a high press up the field, Kerry’s defenders were often left isolated through one-on-one defending in huge tracts of space. Their central defensive channel was often too open and, if Dublin’s finishing had been slicker, Kerry would have been buried.

Dublin’s transition from defence to attack was better and quicker but Kerry also seemed to get their overall attacking strategy wrong. From the outset, they used the Kieran Donaghy tactic without Donaghy on the field.

Of the six long diagonal balls they played into Paul Geaney in the first half, Kerry got no return. Withdrawing Colm Cooper so deep also backfired. Similar to the Mayo replay, it allowed Philly McMahon play further up the field, which suited him and Dublin.

Cooper did have 16 possessions but very few were made close to goal and he had no real playmaking impact. When Kerry did introduce Donaghy, they put Cooper in beside him for a couple of minutes before then abandoning the tactic. 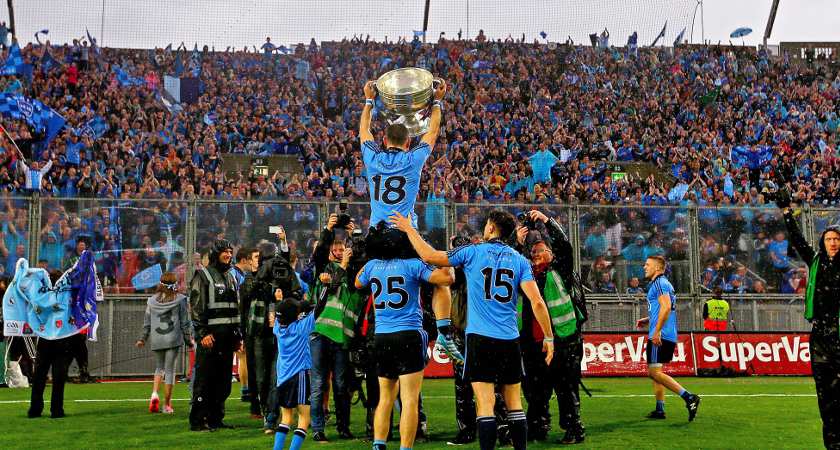 Alan Brogan raises the Sam Maguire in front of Hill 16 [Picture: Inpho]
Donaghy’s introduction changed the shape of the game but it also allowed Dublin to set up defensively different. Of the four long balls played into Donaghy, he only won one. He did set up Killian Young’s late goal chance won from a throw-up ball, but Dublin did more than just turn it over when Young spilled it.

Alan Brogan took the pass from James McCarthy on the Dublin 20-metre line before slotting an excellent point at the end of a run the whole length of the pitch.

Darran O’Sullivan’s contribution was impressive from 12 second-half plays, scoring two points and setting up one more, but Kerry’s attack never caught fire. Ciarán Kilkenny was the only Dublin player to have more than 20 possessions (24) but the conditions made the ball difficult to stick.

The devil is also in the detail. Brian Fenton was impressive from 21 plays. Philly McMahon had a fine game but Johnny Cooper and Rory O’Carroll really set the tone in the full-back line, making a combined 16 tackles and forcing seven turnovers.

Paul Flynn had a massive second-half from ten plays, scoring two points, and winning two contested kickouts. Seven of Diarmuid Connolly’s 19 plays were tackles. Bernard Brogan only had nine possessions but he made five tackles and forced three turnovers.

That’s the kind of unseen, unglamorous stuff that was critical in such dire conditions. All tiny percentages that added up to a huge total. The hurt which had been bottled had only been fermenting for a year, but it had been a long, long year for Dublin. And once it was uncorked, the taste was never as sweet.