MARTYN IRVINE made history this week by winning Ireland's first medal in 116 years at the world track cycling championships. But Alo Donegan was the man who paved the way for not only Irvine, but Shay Elliott, Sean Kelly and Stephen Roche.

THEY said he had guts. That his reserve of determination was bottomless. They said his heart had no quit in it and it beat a rhythm through legs that propelled him to victory.

Alo Donegan didn’t cycle you down, he just left you behind.

The Kildare man could still a stopwatch it seemed, hack minutes off world records when others couldn’t even shave seconds.

He was of quiet demeanor and modest personality but on a fixed-wheel bicycle his charisma cheered crowds and chilled opponents.

Back in the 1930s, Alo thought nothing of cycling 50 miles to a meet, blowing away the opposition, then saddling up for the long journey back to Portarlington.

Even when he got married he honeymooned around the south of Ireland ... on a tandem.

That simple joy of turning pedals brought him to the top of the world and he freewheeled down the other side and into the record books.

One record towers above all the others.

Until 1934 no cyclist had broken the hour mark for the 25-mile time-trial.

It was labelled a limit line for physical endurance, a feat comparable to the four-minute mile in running, out there somewhere at the edge of breaking point.

But Alo Donegan was built to a challenge. At 5’ 7’ with a deep barrel chest and tree-trunk thighs he was possessed of explosive physical force.

He only jumped on a bike at the age of 25 for a race in Killeigh in his adopted county Laois, yet victory as a novice marked him out as a natural.

“On the track and against the clock he was almost unbeatable through those years,” says Alo junior, sitting in the lounge of his house in Rathasker Heights, Naas and leafing through an old scrap book full of newspaper clippings worn yellow by the passing of time.

“He had powerful lungs and legs and loved competition,” he looks up, then down again ... “He dominated domestic track cycling in the 1930s, along with great friend and rival Bertie Donnelly.

“No one drew the competitor out of him like Donnelly did.”

Some days Donegan and Donnelly teamed up. There was that afternoon in 1933, in Croke Park, when the English rode into to town.

The crowds spilled down from the terracing to trackside that day, where Donegan lined up beside Donnelly and Herbie Breadon against a crack British team built on stellar names like Sibbit, Chambers and Jordan.

The British knew Donegan was the dark horse, not just because of the colour of his hair – which he wore combed back and which the wind held fast – but because news of his successes had travelled fast across The Irish Sea.

He was rated as a formidable opponent, within a year he would become the sport’s most formidable when measured against the clock.

But that day in Croke Park, Anglo-Irish fault lines crystalised the challenge – the best team in Ireland on two wheels against the best in Britain, over five miles ... the Hill, the Hogan, the Canal and the Cusack Stand pulsing an expectant beat ... it grew faster with every lap.

When the bell rang for the final turn Donegan clenched his jaw and jumped clear.

Wild scenes of jubilation greeted victory, the type of joy that comes when you witness something exceptional over those that brand you ordinary.

The British were humbled and remained in Donegan’s slipstream as he trail-blazed through times and distances that would one day earn the respect of Eddie Merckx, Sean Kelly and Stephen Roche.

They all knew about the evening the record fell, about the driving gales and the rain that made the backdrop of his assault on ‘the hour’ the opposite of perfect. Yet Donegan’s belief that it could be done dried roads and dropped winds. 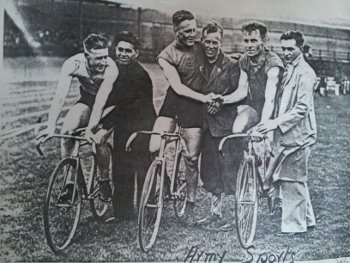 So when he saddled up on the Navan Road in 1934, he felt the rain on his face but history’s hand was there on his shoulder too.

Head down, grinding massive gears, he powered through the wind when it blew against him and harnessed the gusts of fate when they blew from behind.

One by one the miles slipped away, the split-times came and went, and the clock slowed to show that YES! the record was on.

...The Cycle King broke it by more than a minute.

A week after the record fell, Donegan celebrated by lowering the watermark for the 50-miles TT. His will wasn’t to take a drink, it was simply to take to the road again.

They heard about ‘the hour’ in Britain, Sibbet, Chambers, Jordan et al: “HE’S BROKEN THE RECORD? BY HOW MUCH?

“The English fraternity ... they didn’t like it,” says Alo junior. “All their crack riders had failed to break the hour, then they get word that an Irish amateur broke it cycling through wind and rain. They invited him to the Birchfield 25 and he went and did it again. He wasn’t 100 per cent but he was determined to go and still finished first, five seconds under the hour.”

Four years later his world record of 59 minutes and 5 seconds for the hour would be challenged again, this time by the type company Dunlop who sponsored professional British cyclist Henry Hill who completed 25 miles, out and home in 59 minutes, 57.5 seconds. It was 1938.

Weeks later Dunlop ran a magazine advertisement in ‘Cycle’ which declared Hill to be the first man to go under an hour for 25 miles.

It was brought to Donegan’s attention. He was incredulous.

“My father took great exception to this and wrote to Dunlop. They apologised, said they wouldn’t run the ad again. He always said he made records to see who could break them, but Hill didn’t beat him to it.”

Recognition may not always have been universal but in an Ireland, where athletics and cycling were hugely popular, Donegan’s achievements were known from Enniscorthy to Ennistymon.

He was The Cycle King and he was accessible. Fans and admirers would travel great distances to buy bicycles in his shop long after he retired.

It was one thing to meet a record breaker, and something more to return to a quiet by-road with a bike that carried Donegan’s stamp.

Purchase turned a fleeting transaction into something enduring. 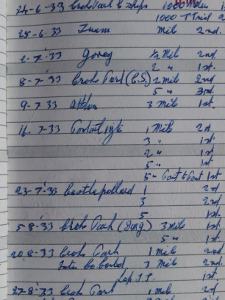 His move into business was a clever one, but then the way Alo junior tells it, a move into anything else would have been some kind of treason because his love for cycling ran deeper than competition.

This was a man who honeymooned around the south of Ireland on a tandem after all. And only the passing of time could curtail that love.

Yet he defied the falling sands.

The years passed and he continued to bike-it-out.

Alo junior tells a story of how he was sitting at home in Naas, County Kildare one Saturday afternoon when the telephone rang. It was his father, said he’d like to come up for a visit, that he’d make his own way.

“I presumed someone was going to give him a lift from Portarlington. But a couple of hours later, he came freewheeling down the hill into the estate on his bike. He was well into his 80s at the time and it’s about 40 kilometers from Portarlington to Naas.

“He rested up for the weekend, enjoyed a good dinner and on the Sunday, said he was cycling back down again. I told him I’d give him a lift, but he wouldn’t have it, insisted he’d be fine so I just asked him to ring as soon as he got back.

“I went off to do a few jobs and next thing I knew the phone in the house was ringing. I lifted it to answer... AND IT WAS HIM! I said: ‘You can’t be back there already. You only left just over an hour ago?

“Sure didn’t I tell you I still got it.”

BATTLE SCARS: The greatest hurlers of the 1980s