MID-MORNING in the Hurlingham Club and the middle-aged man walking towards us is smiling broadly. By rights, he shouldn’t be.

In charge of a team who have won just one game in the last three Six Nations championships, Conor O’Shea should have the weight of the world on his shoulders.

Yet he hasn’t. Even though everything is at stake – the reputation which he built so carefully and cleverly at Harlequins – O’Shea is carefree.

By nature he is a positive person but even enthusiasm may not be enough in this job, as even coaches capable of waving a magic wand sometimes have to admit defeat.

And that’s something the Italians are used to. Since their introduction to the Six Nations Championship in 2000, they have won just 12 of the 85 games they have played, collecting the wooden spoon 11 times.

“There’s a huge job for us to do psychologically with the players,” O’Shea, the amiable Dubliner who is plotting the downfall of Ireland with Italy this weekend, said. “Every week they’re being slammed but they have so much potential.

“That’s part of why we allowed the documentary crew in. Their lack of ego is staggering. We’ve a long, long way to go but hopefully, I can contribute.”

He knows he can. When he got the Harlequins job in 2010, it was just after Bloodgate, when the image of the club was so low that even the bubbles couldn’t reach the surface. But whereas Dean Richards’ demeanour was dour, O’Shea’s was bright.

He restored the club’s good name and restored its status on the park. He may have inherited a mess but he also took over potential.

Chris Robshaw, Danny Care and Joe Marler were on their way to becoming England regulars while O’Shea was on his way to guiding them to a first Aviva Premiership title in 2012.

“Conor is brilliant,” Marler said in an interview with the Sunday Times. “He is not a coach in any way, shape or form but he is a brilliant man manager and his level of support for the players is like no other.

"Publicly, you will always have that support and then behind the scenes, he’ll be saying: ‘Look mate, I will back you to the hilt but sort your s*** out.’”

He had plenty of the proverbial to sort out at Harlequins – but firefighting is what he does best. 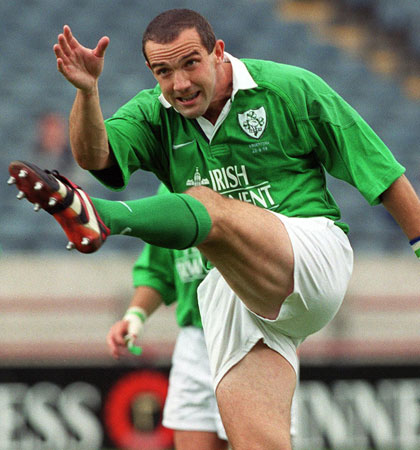 O'Shea in action for Ireland in 1999 (Image: inpho.ie/Billy Strickland)

Having spent 10 years at London Irish as a player, captain, director of rugby and managing director, he learned how to sort out issues before they became big ones.

Next he was put in charge of the Rugby Football Union’s academy programme. No challenge has ever seemed too big.

“You have to care,” he told the Guardian last year. “I know I make loads of mistakes every day of my life, like we all do, and there are things I could have done better, but you put a lot of emotional effort into the role because it is a people job.

"You are dealing with a number of highly-motivated professional sports people.”

And that is one of the things that has impressed him most about the Italians. They may be always on the brink of a disaster but their motivation levels are huge, he says. Their passion in playing for their country has already left a deep impression.

“We’re at a crossroads for Italian rugby and we have a massive responsibility,” O’Shea said. “I’ve said this to the players. Our group has to lead Italian rugby down the right path. And they can do that because they have an unbelievable amount of ability.”

That was shown against South Africa, when Italy took their scalp for the first time earlier this season. And yet, the following week they lost to Tonga. Their two club sides, meanwhile, have gone backwards in the PRO12.

“I know there are loads of things that aren’t right,” he said. “The structures around Zebre, for instance, are terrible. But things are going to change.”

Helping him make that change is Steve Aboud – who is in charge of the technical development of coaches and players in Italy – and clearly the ambition to put proper structures in place, ‘rather than paper over the cracks’ is a big one.

Yet that’s something that is a long-term aim. Short term, all he is thinking about this week is Ireland, the country of his birth, the one he represented 35 times from 1993-2000.

“I’m not going to pretend it is just another game, because it is so much more important than that,” said O’Shea. “I’m sure it will be a similar experience to the feeling Joe (Schmidt) had when he was coaching Ireland against New Zealand.”

Every Irishman, however, will be hoping he won’t mastermind a similar result to the one Schmidt managed in Chicago.