Coming of age: Wes Hoolahan’s late rise to the top has been a long time coming

It was the autumn of 2002. He was only 20, a couple of years out of school, a couple of months away from his first international call-up. Yet he couldn’t have imagined this, being stuck here in a makeshift press conference room, filled with Russian media who had just watched their U21 team beat Ireland’s 2-0.

He looked somewhat bored until a translator started to inform both he and his manager, Don Givens, what had just been said. “Given you have players from Manchester United, Arsenal, Tottenham, why did you pick him – someone from Shelbourne?” Givens was asked, as the enquirer pointed his finger at Hoolahan. “Over here we’ve never heard of Shelbourne.”

Fourteen years on, his prophecy finally came true. Fourteen years, the length of time it has taken Hoolahan to become an overnight sensation. Fourteen years and twice as many rejections. He was a washed-up 24-year-old, unheard of when he arrived at Blackpool train station for the trial that would change his life.

Who’d have thought then when no one from the club met him off the train that he’d end that evening with a contract offer? More to the point, who’d have thought then that a decade later, in Ireland’s opening game of Euro 2016, he’d upstage Zlatan Ibrahimovic and walk away with the man of the match award?

Certainly Givens did. “I always knew Wes had something special,” he said. “He just needed a chance.”

Yet while he got it within three months of that question being asked in Moscow, when Givens was briefly caretaker manager of the Republic of Ireland, he didn’t get a cap and didn’t get a recall for six years, by which stage Giovanni Trapattoni had taken charge. The venue was Craven Cottage, the opposition, Colombia, the status – an end of season friendly. 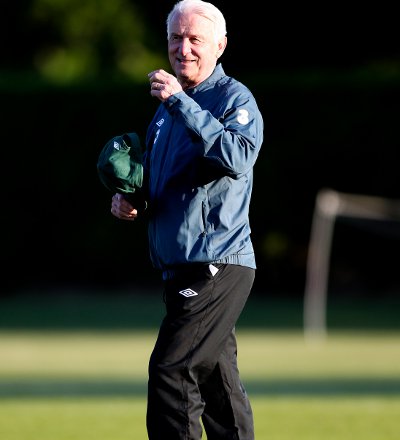 Giovanni Trapattoni [Picture: Inpho]
Yet all Trap could trust Hoolahan with was 90 seconds at the end of 90 minutes. “I didn’t get a kick,” he’d tell Brian Kerr, the former Ireland manager, later that night. Nor would he get one with Ireland for another four years, as Trap continued to ignore him and everyone wondered if the train, again, had left the station.

And then finally the man who was considered too small has handed the big break. Trap saw the light and picked him – albeit only in four friendlies and two competitive games, one of which was at home against the Faroes, the other as a late sub, against Sweden. “It was hardly a vote of confidence,” Kerr said. “He should have been involved more.”

And even under O’Neill, he has been out as much as in, getting 90 minutes just three times during this present regime, although 24 of his 33 caps have come under the Derryman’s watch. “I think he is a smashing lad and a smashing player,” O’Neill said.

So why has he been sacrificed so often, substituted in six out of the eight matches O’Neill started him in the qualifiers, withdrawn again against Sweden and omitted from the starting line-up against Italy.

“He was tired,” O’Neill said, “and this is tournament football. You have to look ahead.”

Imagining the future is one thing Hoolahan frequently does. “The day before, I’ll always think of the game, think what I can do, how I can affect something or help others out,” he said recently.

“If I get the ball in this position, I'll cross it or pass it or score goals. You always dream of scoring goals, in the FA Cup final, in the Champions League or the World Cup. It’s just something I’ve always done through my whole career. It just came from dreaming of football.”

The dream became a reality when he adjusted his footing to strike Seamus Coleman’s cross past the Swedish goalkeeper, Anders Isaksson, with his weaker right foot – easily the greatest moment of his career, even though it has happened near the end of it.

The sublime assist for Robbie Brady's winner against Italy ensued, making amends for a dreadful miss moments before creating the goal that put Ireland into the last 16. 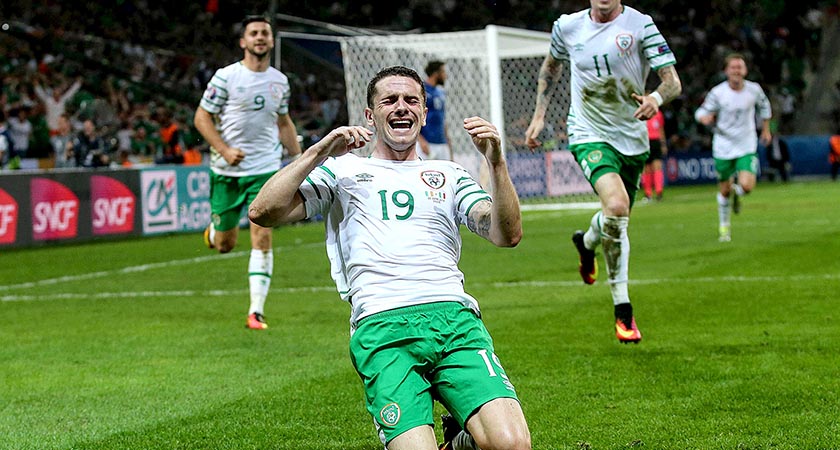 Robbie Brady celebrates scoring against Italy after being teed up by Hoolahan [Picture: ©INPHO/Donall Farmer]
Hoolahan always had the talent to do things like this, but few seemed to believe in him.

“The people in charge of the Irish teams always said that I was too small,” he said. Shelbourne showed faith as did Givens.

“Wes would be lost in the lower divisions in England where teams kick lumps out of one another. In the Premier League, the more skilful players are protected and he could prosper there,” Givens said.

He won three League of Ireland championships at Tolka Park, won the man of the match award in a Champions League qualifier against Deportivo la Coruna, was brought for trials at Sunderland, Leicester City, Millwall and Ipswich Town, but turned away by all of them.

From Livingston, he went to Blackpool. From Blackpool to Norwich, then a League One club, but the team he’d help get to the Premier League.

So even though the Euros have presented him to a continental audience, it isn’t as if he has not done the rounds.

“We have known about him for some time,” said Roy Keane last week. “He was late getting to the top level but he has always been a talented boy.”

Yet one that has largely been ignored. “And that is Irish football’s shame,” said Brady, Ireland's latest goal hero.

“He is someone that links the play, gets in behind defences and makes great intelligent passes. He's a top lad and it's great for Wes, the journey he has been on, to be showing it on the European stage. He’s been fantastic.”

Yet this inaugural tournament may also be his farewell one. “By the time the next World Cup comes around I am going to be 36,” Hoolahan has said. “I haven't really thought about whether I'll play on, but I will see how the summer goes and probably make a decision then.”

After waiting this long to finally be recognised, this taste of the big time might just sway him to stay on after the Euros.