They say success comes in many different forms and that couldn't be any truer for Aston Villa’s Conor Hourihane in recent months.

Indeed, after first seeing the birth of his first child, then scoring his maiden international goal during two man of the match displays for Ireland in March and now getting to the Championship Play-Off final, it’s been some spring for the Cork native.

His recent purple patch in life and on the field was brought to light in the first leg of last week’s Play-Off semi-final, with Aston Villa 1-0 down at half-time to West Brom. With the Villa fans frustrated and the team struggling to break down a sturdy West Brom defence, manager Dean Smith, under huge pressure, turned to Hourihane for inspiration.

The 28-year-old ended up replacing Glenn Whelan, his compatriot, who had given the goal away after mis-controlling a pass in his own half, which allowed Dwight Gayle to break away and score for West Brom. After the restart and with 15 minutes to go, Hourihane changed the game, blasting a lethal shot into the top corner to draw Villa level.

It kickstarted his side’s revival as they went on to win the match 2-1, then go through on penalties in the return leg at the Hawthorns.

“We feel we are a strong starting XI and bench. There are people fighting for places, left right and centre,” Hourihane said after the match.

“Everyone is being kept on their toes. That only brings a good mentality to the side. I feel I have been left out of it a little this year and it is hugely disappointing. I kept my head down and worked hard and you get the rewards in the end.”

It’s fair to say that without Hourihane pulling that strike out of his locker, Villa could well be contemplating another season in the England’s second division. Instead, they will contest the Play-Off final, the richest game in football next Monday against Derby County, with a place in the Premier League on the line.

This season, Hourihane has scored seven goals and has 11 assists to his name. However, while enjoying a good year, he has had to be resilient, having, at times, been booed by Villa supporters for a perceived lack of effort.

The criticism of Hourihane is that, while tidy with the ball, he can sometimes go missing and be too safe in his passing.

Yet, with John McGinn and Jack Grealish as the first choice attacking midfielders at Villa, he has frequently been deployed deep in midfield which is maybe why he has felt the need to be more conservative on the ball.

Admittedly, as like many possession players, Hourihane’s game can go up and down but, while frustrating, it’s better to embrace the moments of quality he does produce. In an Irish team bereft of initiative, goals and calmness in possession, his rise at Villa has been welcome to say the least. 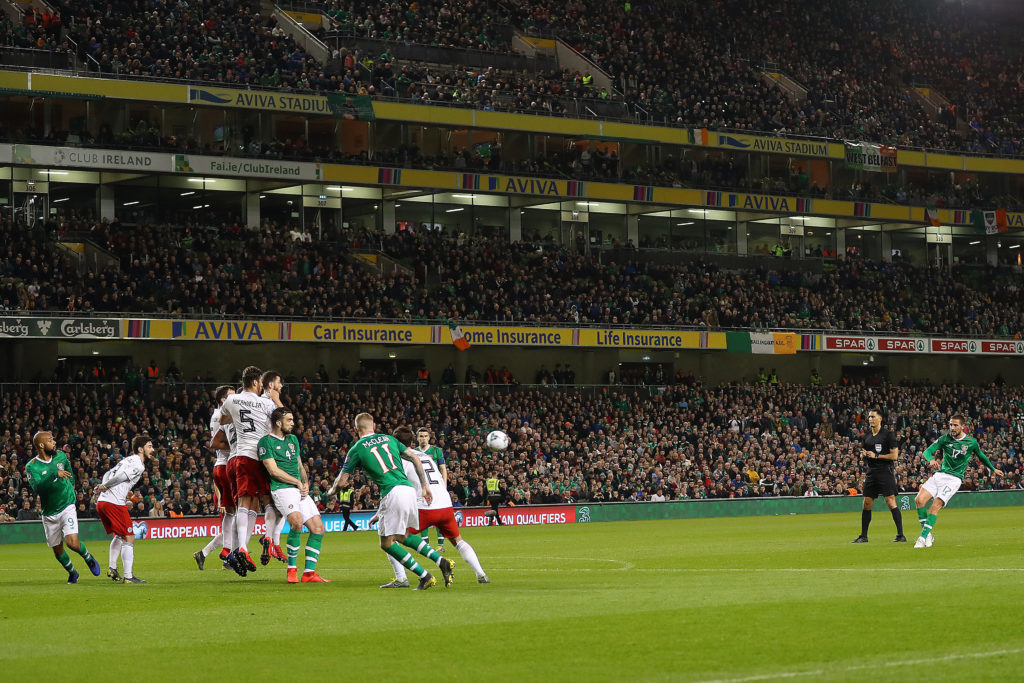 Conor Hourihane of Ireland scores the opening goal from a free kick during the 2020 UEFA European Championships group D qualifying match between Republic of Ireland and Georgia at Aviva Stadium. (Photo by Catherine Ivill/Getty Images)

In the past, the internationally retired Wes Hoolahan was often tasked with being Ireland’s creator-in-chief, but sometimes you got the feeling that he was overly praised and was perhaps rightly deemed a luxury you can't afford in big qualifiers away from home.

Yet, in contrast, with Hourihane, along with his touch of class from free-kicks, there seems to be a little more toughness about him and an ability to produce in important moments. Clearly, in his late 20s, he is hitting his prime and, with Irish representation in the Premier League on the decline, his addition to top-flight would be great news for Mick McCarthy and the Irish setup.

At Wembley, he will be facing fellow Irishman, Richard Keogh, who was impressive in Derby’s heroic 4-2 victory against Leeds United at Elland Road last Wednesday night. The central defender is always determined and led his team brilliantly as captain. But he was also particularly good in bringing the ball out from the back and starting attacks. At 32, he will be desperate to finally make it to the big time.

However, with the defence not a problem like the lack of goals for McCarthy, there’s no doubt Hourihane’s promotion to the Premier League would be a bigger feather in the cap for The Boys In Green.