Delta Work, with Jack Kennedy up, on their way to winning the Paddy Power Irish Gold Cup on Day Two of the Dublin Racing Festival at Leopardstown Racecourse in Dublin. (Photo By Harry Murphy/Sportsfile via Getty Images)

Successful in the Savills Chase over the course and distance at Christmas, Gordon Elliott's seven-year-old confirmed form with Kemboy and Presenting Percy to clinch a notable big-race double.

La Bague Au Roi was the first to show, with Cadmium going on at the fourth fence and Kemboy always close up.

Jack Kennedy was content to keep the Gigginstown House Stud-owned Delta Work (5-2) just off the pace until he crept into it, with Davy Russell making a similar move on Presenting Percy. 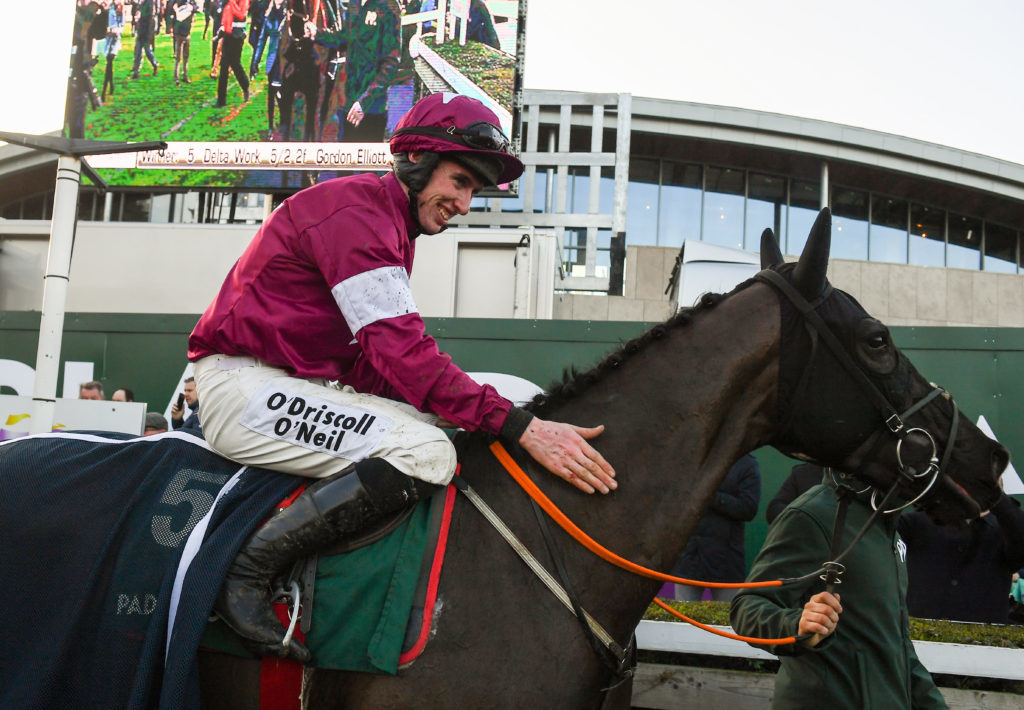 Delta Work, with Jack Kennedy up on after winning the Paddy Power Irish Gold Cup on Day Two of the Dublin Racing Festival at Leopardstown Racecourse in Dublin. (Photo By Harry Murphy/Sportsfile via Getty Images)

Those three staged a battle royal, with Kemboy leading at the second-last fence.

There was all to play for at the last, but Delta Work soon had the upper hand and went on to prevail by a length and a half from Kemboy.

Presenting Percy was three and a quarter lengths back in third. Delta Work was cut to 6-1 from 8-1 for the Magners Cheltenham Gold Cup with Paddy Power and to 11-2 with Betfair.

Elliott said: "The last couple of seasons he's improved with races. We missed here last year and went straight to Cheltenham, which might not have been ideal.

"It's great for Jack who is a young lad only coming back after a few injuries and he has nerves of steel. The one thing we have learned about this horse is to put him to sleep and get him popping away.

"It's all systems go now for Cheltenham. Our horse is improving the whole time and we can dream about a Gold Cup now."

Eddie O'Leary, racing manager for owners Gigginstown House Stud, said: "This has been a lucky race for us.

"This horse needs racing and improves from race to race. He wears a hood, but he's settling better now. He jumped well and Jack gave him a super ride.

"In fairness to Leopardstown they have done a superb job with the ground today. We were very impressed with the chase track."