JIM GAVIN dropped two former footballers of the year, but Stephen Rochford allowed something much more precious slip through his fingers; the chance to become the first Mayo manager since 1951 to lift Sam Maguire.

Even allowing for the fact that it’s always easier to appear wise after the event, the difference between great managers and good ones is the ability to have foresight rather than hindsight. Gavin – again – camp up trumps in this respect, whereas Rochford got nine out of 10 things right, but one crucial call wrong.

The news broke at 4.35pm in a crowded room on the upper deck of the Hogan Stand. Bernard Brogan and Michael Darragh Macauley had been dumped by Gavin; David Clarke by Rochford.

It’s a question Rochford will be forced to answer for the rest of his life. And while he spoke well on the issue afterwards – ‘we came up here as a team and we’ll leave as a team’ – the footballing pathologists conducting the post-mortems weren’t as kind, pointing not just to the penalty Rob Hennelly (Clarke’s replacement) conceded in the second-half, when he spilled a routine catch before fouling Paddy Andrews, but also the nervy kick-outs which led to three of Dublin’s scores and indirectly, to Lee Keegan’s black-card.

Cue Rochford to re-enter the narrative and talk of conspiracy theories. “Lee Keegan is one of the most mentally tough honest-to-God football guys I have ever met,” Rochford said in the Citywest hotel on Sunday morning. “And I am under no illusions that there was an agenda out there. It’s unfortunate that former Dublin players (Alan Brogan, Ger Brennan and Paul Clarke were publicly critical of Keegan’s man-marking style in the build-up to the replay) would feel it necessary to do that, guys who haven’t been whiter than white themselves. But look, they’ll have to deal with their own conscience on that.”

In truth, though, most of the introspection will be conducted by Mayo. Cruelly they lost yet another All-Ireland – the third time they have done so in five years, their eighth since 1989. Yet it is the manner of the defeat which will haunt them until the grave. In the drawn game they conceded two own goals, in the replay they conceded a different kind of own goal (needlessly benching Clarke for Hennelly). “That decision is coming under scrutiny and maybe rightly so,” Rochford admitted.

Yet while throwing the manager, and his goalkeeper, under a bus is the easy thing to do, it also has to be pointed out how much Rochford got right over the course of the 140 minutes. Tactically, Mayo out-thought Dublin in the drawn game. Psychologically, they were well-prepped too, coming back from five points down in the drawn match, and from four points down in the opening minutes of the replay. 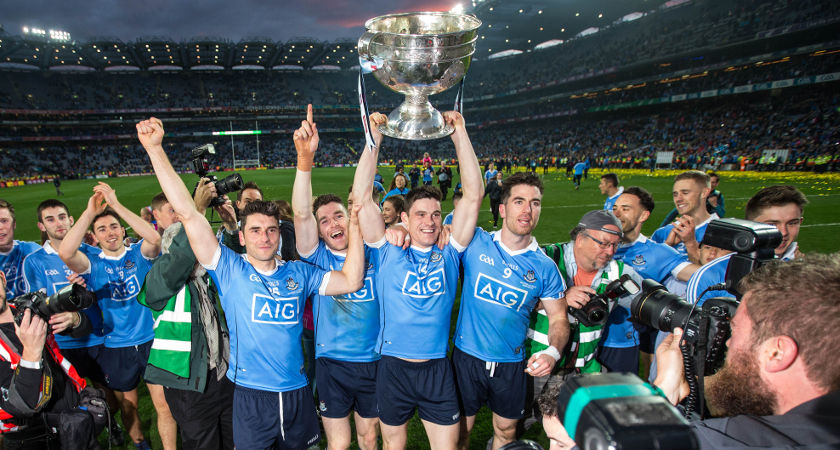 Bernard Brogan, Kevin McManamon, Diarmuid Connolly and Michael Darragh Macauley celebrate with the Sam Maguire [©INPHO/Cathal Noonan]
Endlessly criticised for their character, or supposed lack of it, this team has proven once and for all that they have no shortage of it.

Yet so, for that matter, have Dublin. Reflect for a moment on the margins of their All-Ireland final wins since 2011. They beat Kerry by a point five years ago and by three points last year. Mayo, in the 2013 decider and last Saturday, were also edged out by a point. Closing the deal is Gavin’s specialist subject.

And with three All-Irelands, four Leinster titles and four All-Irelands to his name now, he on the verge of joining Sean Boylan as the second most successful manager in Gaelic football history.

Yet something is still missing. Kevin Heffernan earned an affectionate nickname from his constituency on Hill 16 while Boylan is revered in Meath; Mick O’Dwyer in Kerry. Even less successful managers – Jim McGuinness in Donegal and Joe Kernan in Armagh – have a much higher profile and much deeper connection with their supporters whereas Gavin, the cool cat, prefers to keep a detached view on life, which may help his team but ultimately could affect his legacy.

As for his team, the question posed about whether they deserve to be compared with Heffo’s Army, the barnstorming Dublin team of the 1970s, is now redundant. Never mind being their equal, they – statistically – are better.

“There were a lot of questions thrown our way,” midfielder Brian Fenton said afterwards. “Were we as good as people thought? It’s great we have answered those questions.”

And they did so in style. Irrespective of the fact that Hennelly’s wayward kick-outs presented Dublin with opportunities, the reality is they still had to convert them. And time after time Dean Rock did just that, scoring nine points (he notched up 1-58 over the course of the summer to finish as the Championship’s top scorer).

In total, Dublin recorded just four wides over the course of the afternoon, highlighting not just their accuracy but also their ruthlessness and clinical decision making. “We think before shooting,” Fenton said.

It helps of course when your manager has the option of bringing Cormac Costello, Macauley and Bernard Brogan off the bench. Rochford, in contrast, hadn’t those options. All-Irelands, it is said, are no longer won by the best teams but the superior squads, a lesson Rochford learned the hard way on Saturday.

“Look people will say we’re finished,” Rochford said afterwards, “but we’re not. We will be back. I don’t feel unlucky. You make your own luck. Dublin have. They’ve been to four finals and have won them all. Kerry have been able to make their own luck in finals. We have to find that.”

The search makes for painful yet fascinating viewing.