Stephen Kenny: 'Qualifying from the Europa League group stages would be something else'

DUNDALK manager Stephen Kenny says his side are happy expectations surrounding the Lilywhites are high ahead of their crunch Europa League clash with AZ Alkmaar on Thursday.

Since Kenny's introduction, he has helped turn the club around. He arrived after the club had narrowly avoided financial collapse and relegation from the Premier Division.

They now occupy second place in their Europa League group and know victory at home this week could see them reach the knockout stages.

Dundalk drew in Holland thanks to a Ciaran Kilduff strike but since then they have pushed group-toppers Zenit St Petersburg twice, but Kenny isn't underestimating the challenge ahead.

"Expectation has been raised,” he told The Irish Post. “We are fine with that. We are sort of used to being favourites over the last couple of years. We temper that with the fact that AZ have won the Eredivisie in recent years.

"They have been voted the best academy in Holland the last two years against the most famed academy in the world probably which is Ajax. 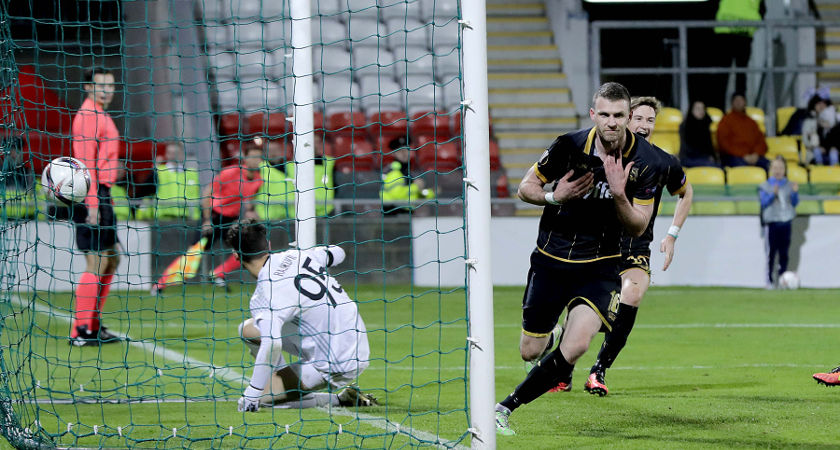 Dundalk's Ciaran Kilduff celebrates scoring against Maccabi Tel Aviv [©INPHO/Morgan Treacy]
"They have just sold Vincent Janssen for £18million to Spurs. That is the contrast in situations. We haven’t sold anyone. But that doesn’t phase us. We are enjoying the way we are playing in Europe and we hope to continue in that vein."

After a season of firsts for Kenny and Dundalk, they will be hoping that will continue by being the first Irish club to reach the knockout stages of the Europa League.

They prepared for Thursday’s game with a 2-1 defeat against Brentford B team in west London last week, but Kenny insists that won’t have a bearing on the AZ game or their final game with Maccabi Tel Aviv, who are level on points with them, in December.

"Friendlies are friendlies. will make sure we are ready. Qualification is still very much all to play for. AZ can still qualify. Maccabi Tel Aviv, who we play in the last game, are probably the favourites to qualify. We still believe we can reach the knockout stages. Two draws might get us through. On the other hand we might need four points, but if we do, we can get them.

"It’s a big two games. It is the biggest two games for me and in League of Ireland history. We could progress from the group to the knockout stages. Getting into the group is hard enough. It has proven impossible nearly, but to get out of it again and qualify from it would be something else."