IT was a case of extra-time heartbreak for Robert Emmets, as Mayo side Tooreen advanced to the Connacht Intermediate Hurling final with a 0-30 to 1-23 win in Roscommon last weekend.

Just a week previously Kevin McMullan's charges prevailed by two points in the London decider, after over 100 minutes of hurling, but they were unable to get on the right side of the result this time around, after a keenly contested battle with their East Mayo opponents.

Robert Emmetts overcame some adversity to deliver a strong performance in this game.

On Saturday evening their hurls weren't put on the plane as they travelled over. 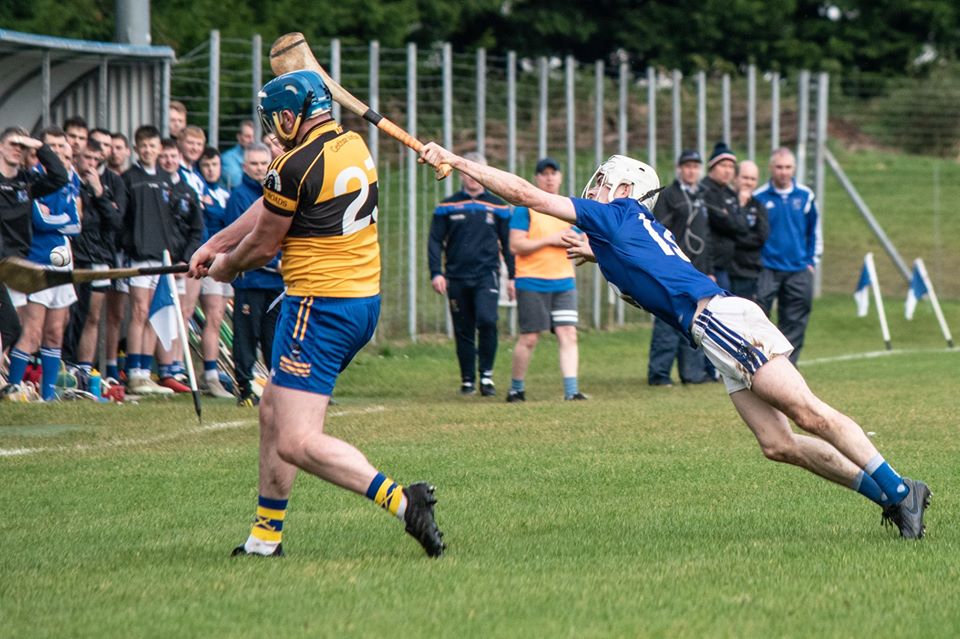 Paddy McNaughton puts the ball into the danger area for Robert Emmetts despite the attention of Shane Boland. Photos: Ciara Buckley

But from Antrim clubs Cushendall and Loughgiel Shamrocks to Antrim businesses TeamKit Ballymena and Martin Hurls, plus with the assistance of clubs in Galway, enough hurls were gathered in time for the match.

Then due to a colour clash, Emmetts changed their jerseys to that of local club Four Roads, whom Tooreen had beaten a week previously at the same venue.

Emmetts certainly left everything on the pitch, despite losing key player Ben Conroy through injury in the first half of normal time.

The Laoisman fired 12 points in the county final win, and contributed in the early stages, with a blistering start to this contest, as the London winners led by 0-2 to 0-0 after just two minutes. 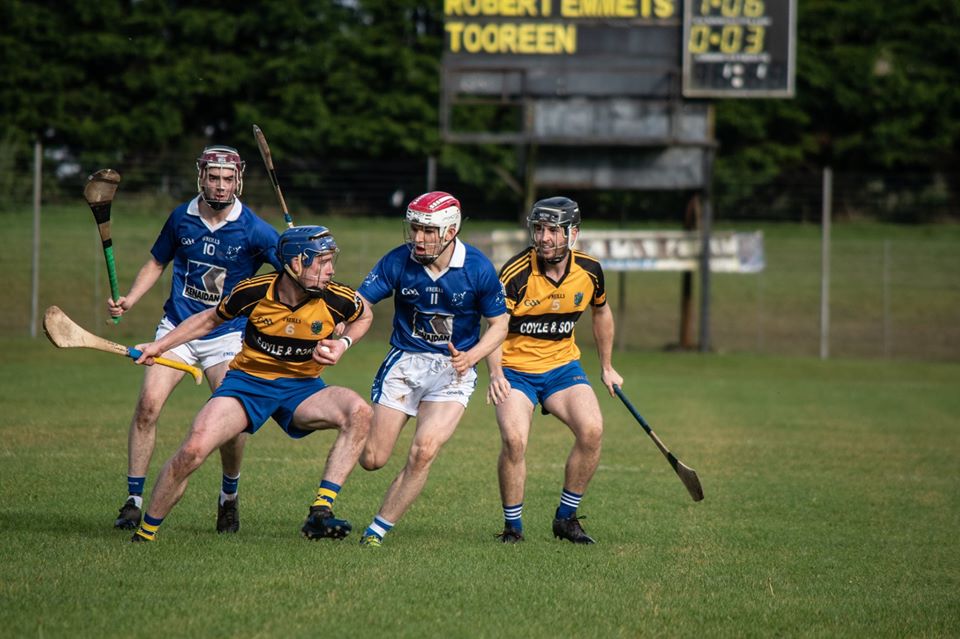 Conroy and Emmetts captain Benny McCarry were on fire in the opening moments, before Sean Regan replied for Tooreen.

It was end-to-end hurling, with McCarry ensuring a 0-3 to 0-1 lead, with just under four minutes gone on the clock.

Antrim men Paddy McNaughton and McCarry linked up to extend that advantage to three points soon-after, with Emmetts really signalling their intent early on.

A well-worked goal from Cian Lordan soon followed, after a diagonal ball was sent in from the corner, to ensure all of the full-forward line had scored, with just five minutes gone on the clock.

A further Conroy score pushed Emmetts 1-5 to 0-1 ahead, but he tore his MCL in the process, and subsequently played no further part in this game.

Kenny Feeney responded with a quick-score from the resulting puck-out, but wides were costing Tooreen, as Emmetts led by 1-11 to 0-9 at the break, with McCarry contributing six of their scores. Emmet's defence proved solid in halting much of Tooreen's advances.

It was a frantic opening to the second half, as Tooreen cut the gap to two points early on the restart, thanks to a trio of unanswered scores.

McCarry opened up a three-point gap, but the addition of Sligo Rovers player Brian Morley added greatly for Tooreen, both in delivering and setting up scores.

The switch of Fergal Boland to midfield was key for Tooreen, and with his brother Shane impressive they dug in.

The loss of Sean Regan to a red card could have proved costly, but Tooreen equalised by the 52nd minute.

Back to 15 players, Tooreen proved strongest in extra-time, outscoring them by 0-4 to 0-1 in the first period, with Kenny Feeney leading the charges.