Jamie McGrath of Dundalk in action against Rahil Mammadov of Qaraba FK during the UEFA Champions League Second Qualifying Round 1st Leg match between Dundalk and Qaraba FK at Oriel Park in Dundalk, Louth. (Photo By Seb Daly/Sportsfile via Getty Images)

DUNDALK and Shamrock Rovers will carry the League of Ireland flag into Europe this week, with both having a realistic chance of progressing to the next round after last week's first leg ties.

Reigning champions Dundalk staged a second half fightback against Qarabag of Azerbaijan, earning a 1-1 draw in the Champions League second qualifying round first leg tie at Oriel Park, while Rovers also came from behind to defeat Apollon Limassol of Cyprus 2-1 at Tallaght Stadium.

Dundalk suffered the hammer blow of conceding a fourth minute goal, with Mahir Emreli's header from a corner bouncing between goalkeeper Gary Rogers and skipper Patrick Hoban, and taking a deflection off the Dundalk striker on the way into the net.

But although the Lilywhites were off the pace in the first half, they hit back after the break, and deservedly drew level 12 minutes from time, when Hoban headed home the equaliser from close range off a Ronan Murray corner kick. 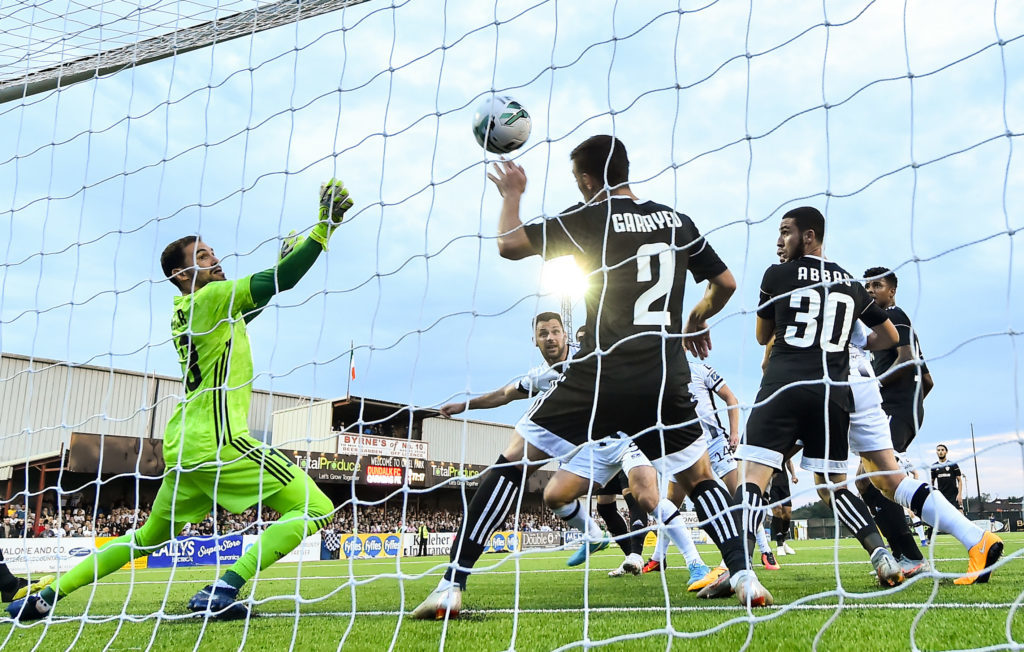 Patrick Hoban of Dundalk heads to score his side's goal during the UEFA Champions League Second Qualifying Round 1st Leg match between Dundalk and Qaraba FK at Oriel Park in Dundalk, Louth. (Photo By Seb Daly/Sportsfile via Getty Images)

They now travel to Baku for the second leg this Wednesday with their Champions League hopes still alive. and should they progress they will face the winners of the tie between Sutjeska of Montenegro and Apoel of Cyprus in the next round.

Shamrock Rovers bounced back from the setback of conceding an early goal to defeat Apollon Limassol 2-1 at Tallaght Stadium, in the first leg of their Europa League Second Qualifying round tie.

Appollon captain Fotis Papoulis silenced the home crowd with a spectacular opening goal in the fourth minute, chesting down a Joey O’Brien header, before hammering an unstoppable volley into the top corner of the net.
But within ten minutes, Rovers were level, when Jack Byrne’s corner was met by Lee Grace, whose header beat the keeper and ended in the net off the right-hand post.

In a fast paced end to end game, Rovers more than held their own against opponents with an impressive recent European pedigree, and they take a priceless lead into Thursday's second leg thanks to a second half winner from Roberto Lopes.

Scorer of two goals in the last round against SK Brann, Lopes struck just after the hour when he sent a fine glancing header from Jack Byrne's free kick across the keeper and into the far corner.

Should they protect their lead in Cyrpus on Thursday, a third qualifying round tie with Austria Vienna awaits the Hoops. Both clubs were also involved in SSE Airtricity League Premier Division games at the weekend and Dundalk rounded off a good week by extending their lead over Rovers at the top of the table to seven points.

A goal from John Mountney six minutes into the second half ensured a 1-0 win for Dundalk over St Patrick's Athletic at Richmond Park on Saturday evening, while Rovers were held to a 1-1 by Cork City at Turner’s Cross on Sunday.

Daire O’Connor had given City the lead with a goal in the 33rd minute, but Aaron McEneneff rescued a point for Rovers with a curling shot from the edge of the area just before the hour mark.

Meanwhile, Bohemians remain in third place, five points behind Shamrock Rovers after also being held to a 1-1 draw away to Sligo Rovers on Saturday evening.

Both goals came in the first half, with Bohs taking the lead through a Danny Mandriou penalty on 37 minutes, but the lead lasted only seven minutes before David Cawley levelled for the Bit O'Red.

In the other games a Harry Ascroft header earned Finn Harps three vital points with a narrow 1-0 win over Derry City. The result combined with UCD's 2-1 home defeat to Waterford means Harps are now three points ahead of the students, who remain at the bottom of the table.

A cracking volley from Waterford substitute Dean Walsh four minutes from time sealed UCD's fate, who had looked to be picking up a point after Liam Kerrigan had cancelled out Zack Elbouzedi's first half goal for Waterford. Shelbourne continue to set the pace at the top of the First Division, with their 5-2 win over Wexford at Tolka Park keeping them eight points clear.