A STOPPAGE time goal from Aaron Greene clinched a 1-0 win for Shamrock Rovers against 10-man Bohemians in the Dublin derby on Saturday afternoon.

The full force of Storm Dennis hit Phibsborough before and during the game, causing RTE to cancel their planned live television coverage as the weather conditions made the TV gantry unsafe.

The stadium and pitch were both deemed safe so the game went ahead, but both teams struggled to cope with conditions that saw the pitch deteriorate with each passing minute.

It was all the more difficult for Bohs who were reduced to ten men when Andy Lyons was sent off early in the second half for a challenge on Graham Burke, and were under the cosh for most of the game thereafter, but just as it seemed they had held out for a point, Aaron Greene struck to pinch the points. 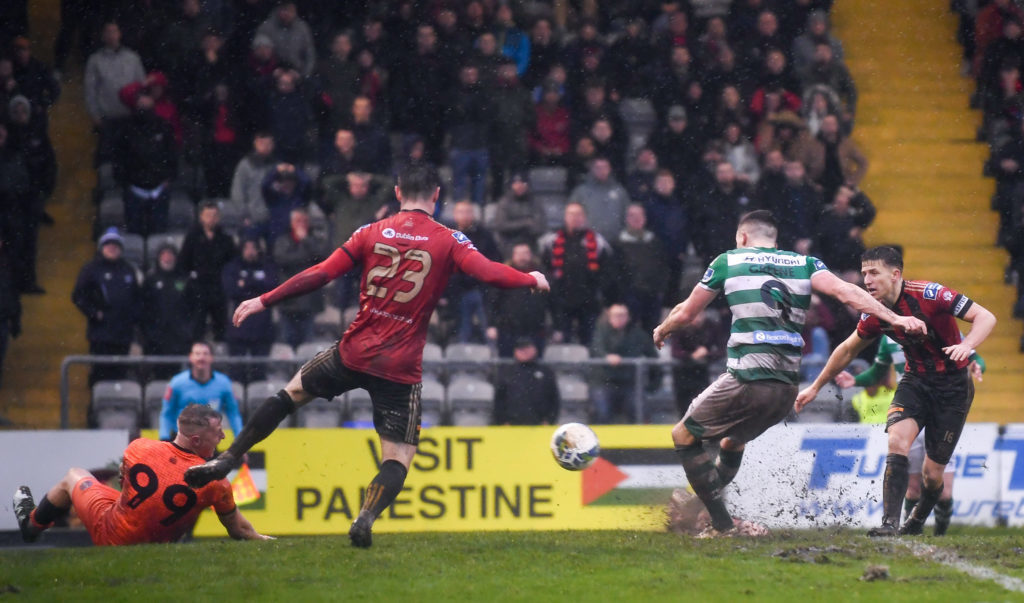 Winning start for the champions

Dundalk made a winning start to the defence of their SSE Airtricity League title, but were made to work hard for their 1-0 win over Derry City at Oriel Park.

Vinny Perth’s men had to wait 79 minutes before Dane Massey struck the decisive goal against a Derry side that proved to be tough opponents.

The first half delivered little in the way of clear cut chances, but Dundalk began to take control after the break.

In the space of two minutes Daniel Kelly volleyed an effort just wide, and then pounced on a loose clearance from Ally Gilchrist and fired in a shot that rebounded off the woodwork, with Derry keeper Peter Cherrie well beaten.

Cherrie then denied fellow Scot and Dundalk debutant Cammy Smith with a fine blocking save, before he was finally beaten 11 minutes from time.A corner floated in by substitute Jordan Flores found Dane Massey unmarked on the penalty spot, and he volleyed low into the bottom corner of the net.