THE story of Adrian Doherty, football’s lost genius, is not your average hard-luck story.

Irish football is full of tales of misfortune, but the career of Doherty - a relative unknown from Strabane, Co. Tyrone - is one that carries extra intrigue.

Had his remarkable talent carried him to the right flank of the first-team at Manchester United, David Beckham may well have had a very different career.

As a youth, Doherty had more talent than Beckham – by all accounts – and there’s a strong case to suggest he could have been better than Ryan Giggs too, but Doherty’s life took a very different path to those Old Trafford legends.

Dead before the age of 27, the previously hidden and fascinating life of Adrian Doherty has finally been told in Oliver Kay’s new book, Forever Young.

Here’s just some of the key points we learned from the book:

1. Doherty came from a fine footballing family. His father, Jimmy, had played at senior level for Derry City FC in the 1960s, but when he received a phone call from Alex Ferguson in the late 1980s to tell him Adrian “ticked all the right boxes”, he knew his son was on another level.

2. In a match programme in October 1987, Ferguson mentioned Adrian – who would have been just 14 at the time – describing him as: “Like greased lightning. He plays wide on the right and he’s a very exciting discovery”.

3. He had no interest in GAA. Once, his P.E. teacher sent him off for dribbling the length of a Gaelic football pitch with the ball on his head. He was so good with his feet and head, he refused to use his hands when playing Gaelic football.

4. He played for Northern Ireland Schoolboys with Brendan Rodgers and befriended the current Celtic manager, but the pair lost touch after Doherty quit the youth international scene in 1988. Rodgers remembers him fondly, saying: "He was quiet, shy, such a nice guy, but there was a big personality underneath all that."

5. Feeling uncomfortable and intimidated by the Belfast-dominated set-up within Northern Ireland Schoolboys, Doherty mulled over the idea of representing the Republic after quitting, but it was never more than a notion. 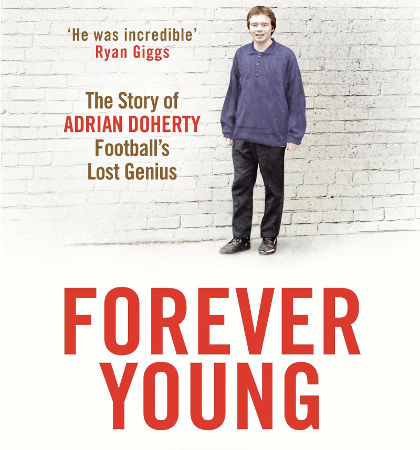 Forever Young, by Oliver Kay [Pic: Quercus]
6. After moving to Manchester at 16 to begin his apprenticeship with United, Doherty became crippled by homesickness. He was granted leave to return to Strabane three months into his internship. When he returned, he moved in with Irish couple Frank and Geraldine Manning in Levenshulme, Manchester, which helped him settle.

7. Doherty used to go busking around the streets of Manchester, playing improvised versions of Bob Dylan songs, while his peers at United took advantage of free tickets to games at Old Trafford. By many accounts, he wasn't a very good musician, but he enjoyed it possibly even more so than playing football.

8. Ferguson seriously considered handing Doherty a Manchester United debut away to Southampton in 1990, when he was still only 16. In the end, he opted against it, but since Doherty travelled with the first-team squad he was awarded a £200 bonus after the team won, with which he bought a typewriter to feed his love of writing poetry.

9. He was completely anti-materialistic, barely cut out for the direction football was heading. Indeed, he cycled a second-hand bike to Manchester United training sessions and dressed in self-styled, second-hand clothes, such as his trademark Aran jumper.

10. Doherty was once again on the brink of making his Old Trafford debut at the age of 17 but he suffered an anterior cruciate ligament tear in his right knee playing for the club’s ‘A’ team. Ryan Giggs got the nod instead a week later and went on to win more medals than any other player in the club’s history.

11. Adrian tried to regain full fitness for the following two years, but his knee kept breaking down. Eventually, in the summer of 1993, he was released by United. He continued his career with three appearances for Derry City, but quit football for good soon after.

12. Famous players to have shared a field with Doherty at youth level were in awe of him. Gary Neville has since compared his “low centre of gravity” and “tight control” to that of Lionel Messi, while Giggs said he was “the quickest I had ever seen and he was so brave as well”.

13. Doherty had a phobia of water and couldn’t swim. In fact, his parents rang Manchester United before he started his apprenticeship to ask for him to be omitted from planned swimming activities. He died a day before his 27th birthday after spending a month in a coma having fallen into a canal in The Hague, Netherlands, in 2000.

14. Doherty was a huge fan of poetry and music, and in particular Bob Dylan. Indeed, the title of the book, ‘Forever Young’, comes from the Dylan song of the same name, which was played at his funeral by his younger brother Peter.

Adrian Doherty: The Irishman who could have been king of Old Trafford