Neil Lennon has become the new manager of Hibernian after signing a two-year deal with the Scottish club.

The 44 year-old replaces outgoing boss Alan Stubbs, who has joined Rotherham after two seasons in charge at Hibs in which time he failed to secure promotion.

“It feels fantastic and I feel very proud first of all, obviously tinged with anticipation as well and I’m looking forward to the challenges that lie ahead’’ said the former Celtic manager.

“It’s a great stadium and I always enjoyed playing here, the atmosphere was always great. I was really impressed with the training facilities when I saw them last night.

“The infrastructure is there and it is a big city club, what we have to do now is to endeavour to get out of the division that we find ourselves in and build a team to challenge for honours consistently over the next few years.”

Lennon will be joined at Easter Road by his assistant Garry Parker, who has also been the Co. Armagh native’s right hand man at both previous clubs Celtic and Bolton Wanderers. 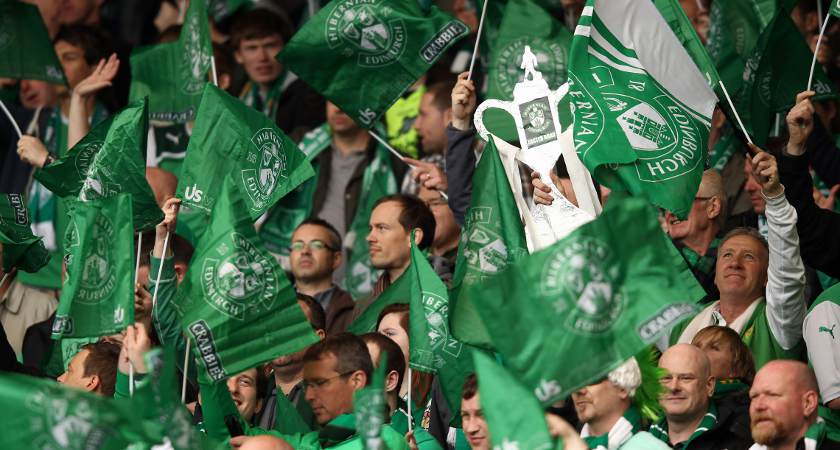 Hibs fans are well clued up on their Irish history [Picture: Getty]
Also, it is understood that Lennon has been promised a significant transfer budget from the board ahead of the new season, a pivotal reason behind his willingness to join.

Rod Petrie, Chairman of Hibernian, said: “We are delighted to have secured a Head Coach of Neil’s calibre and profile, and we look forward to him bringing his drive and mentality to our campaign to win the Championship this season and secure promotion back to the top flight of Scottish football.”

Leeann Dempster, Chief Executive, added: “As soon as Neil was identified as the outstanding candidate we were determined to bring him to Easter Road.

"He has managed at a very high level, taking Celtic to the last 16 of the Champions League, and we were attracted by his ability to get the most out of players and his driven, winning mentality.

"On behalf of everyone at Hibernian FC we would like to extend a warm welcome to both Neil and Garry."

Hibs, after their recent Scottish Cup win last month, will be buoyed by their latest managerial coup in Lennon, who has a formidable C.V. in Scottish football, boasting three league titles and two Scottish cups whilst in charge at Celtic between 2010 and 2014.

Lennon, who has been out of management since leaving his Bolton Wanderers post in March, arrives at Easter Road looking to guide Hibernian to promotion after playing the last two seasons in the Championship.

Munster's team to face Edinburgh on Friday is out