BELFAST’S Carl Frampton steps up in weight and puts his undefeated record on the line in the toughest fight of his career when he faces WBA featherweight champion Leo Santa Cruz at the Barclay Center in Brooklyn, New York on Saturday, July 30.

Frampton, 22-0 (KO 14), is riding high off the back of a unification victory over Manchester’s Scott Quigg and now looks Stateside to solidify his legacy and open up lucrative opportunities in the US market.

Standing in Frampton’s way is California-based undefeated three-weight titleholder Leo Santa Cruz, 32-0 (KO 18), who is one of the most popular TV-fighters in America with a large Mexican fanbase and the backing of some of the most powerful men in boxing.

The same February night Frampton and Quigg clashed at the MEN Arena, Santa Cruz coolly dispatched former Frampton foe Kiko Martinez inside five rounds in California. This triggered rumblings of a showdown between the pair. Both boxers have ties to the PBC organisation and enigmatic boxing advisor Al Haymon, so this match, which will likely push the victor into the Top 10 on the ‘Pound-for-Pound’ list, was a relatively easy fit.

A mouth-watering pick ’em scrap between two aggressive and undefeated fighters, facing the sternest opponent of their careers. This is exactly the type of fight boxing needs. However, a shadow loomed over the contest even before it was formally announced. A sullen, brooding, double Olympic gold medal winning shadow in the shape of Cuban maestro Guillermo Rigondeaux.

Boogieman-figure Rigondeaux, who was made the mandatory challenger for Frampton’s 122lb belt, is no stranger to Irish boxing fans. Having won his first amateur world championship in Belfast in 2001 he was then guided for the majority of his 17-fight undefeated professional career by Corkman Gary Hyde, with wins coming over Limerick’s Willie Casey in Dublin in 2011 and just this month breaking the jaw of Jazza Dickens in Cardiff en route to a stoppage win after two rounds.

Some hard-core fight fans have poured scorn on Frampton and Santa Cruz, accusing them of being refugees from the 122lb super-bantamweight division and scrambling aboard an inflatable dinghy to float to safer waters in the 126lb featherweight division and away from the mercurial Cuban. 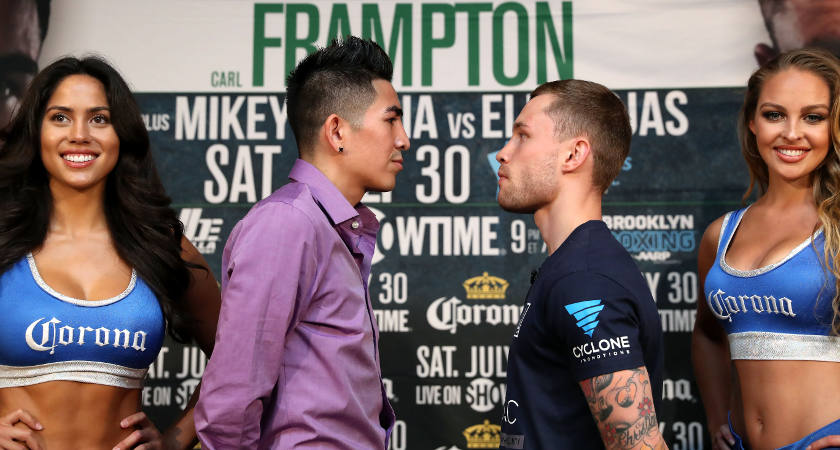 Frampton, right, and Santa Cruz press conference, Barclays Center, Brooklyn, New York 28/7/2016 [©INPHO/Presseye/William Cherry]
Justifying his decision to jump weights, Frampton explained that “making 122lb was hurting me a little bit. I’m a big puncher and I can punch hard when I’m in the gym around 128 to 130lb but when I get down to 122lb it takes a little bit of that away. So now at 126lb I am going to bring some power with me and I am going to be punching harder and Santa Cruz is going to feel it.”

‘The Jackal’ was frank when addressing a potential fight with the man he shares a nickname with but wont share a ring with. “I believe that Rigondeaux is the king of the super-bantamweight division, that’s me being honest. But if your manager or the guy you work for gives you a tougher job for less money then you are not going to take it, and the money is just not there. He doesn’t have the right team around him to offer the big bucks. I will get three or four times the money to fight Santa Cruz than Rigondeaux, and that’s the bottom line. This is a tough game, I’ve a young family to look after and I want to live comfortably after boxing and I want my family to live comfortably.”

Santa Cruz has become accustomed to criticism throughout his career. Accused of being a cash-cow, wrapped in cotton wool and softly matched by Golden Boy promotions, who was sheltered from pressure on the undercards of big named PPV stars such as Floyd Mayweather Jnr and fellow Mexican star Saul ‘Canelo’ Alvarez.

Criticism of ‘El Terremoto’ came to a head when he stopped former sparring partner Manuel Roman and unheralded Jesus Ruiz and then whitewashed an over-matched Jose Cayetano in back-to-back title defences. However, the cotton wool was well and truly binned when he stepped up to featherweight to challenge seasoned former world champion and fellow LA-based Mexican Abner Mares in a fight many made the more seasoned Mares a strong favourite.

Santa Cruz came through a bloody and gruelling 12-round scrap to earn a points victory and claim the WBA featherweight title, quieting his naysayers and cementing himself as serious 126lb force.

Frampton tips his hat to ‘El Terremoto’ but is nonetheless confident ahead of their showdown.

“Santa Cruz has never lost and has never even looked like getting stopped, but he has never been hit by someone that hits as hard as me before. So that’s the plan, the main thing is to win, but I believe I have the power to knock him out. 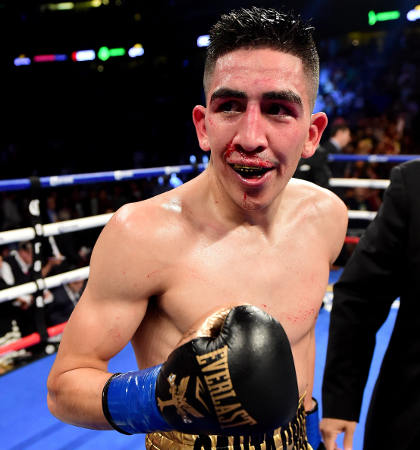 Leo Santa Cruz [Picture Getty]
“It’s important to be recognised in the States where the big fights can be made and this is where all the great fighters end up fighting. I want to be remembered as a great fighter and as someone that came to America and who has beaten great champions like Leo Santa Cruz. I want people to talk about me when I am an old man,” added Frampton with one eye on his legacy.

Santa Cruz believes he too has reason to be confident. Sitting ringside, he smirked during Frampton’s last attempt to break America against little known Alejandro ‘Cobrita’ Gonzalez. Cobrita was there to ensure Frampton impressed on his US debut but the Belfast boy was dropped twice in the first round before adapting well to dominate and earn a points victory.

Despite that unflattering performance, Santa Cruz isn’t taking the fight lightly and recognises the Ulsterman’s strengths. He said: “This could be an even bigger win for me than the Abner Mares fight and it will bring me to the next level. Frampton has great skills and is a great fighter who’s undefeated like me so he doesn’t want to lose. It’s going to be a great fight.

“I hate to fight guys shorter than me, I prefer to fight guys the same height or even taller than me, but we’ve been putting in a lot of work in the gym with guys smaller than to prepare and it’s a lot more comfortable for me now but it’s still a challenge,” added Santa Cruz with a hint of apprehension.

To separate the evenly matched pair is difficult. Bookmakers slightly favour the Mexican, but a strong credible case can be made for each man.

Santa Cruz is a buzzsaw with a ferocious work-rate, hammering a torrent of relentless pressure forward in straight lines and throwing in excess of 100 punches a round. He benefits from a height and considerable seven-inch reach advantage over Frampton and is comfortable winging away on the inside and has a punishing ‘double jab-driving right hand’ combination that can wilt an opponent from long range like ice cream in the Californian sunshine.

At 5ft 5in, the squat, muscular Frampton is no stranger to giving away height and reach. He has a superior ‘Ring IQ’ and is technically the better boxer. Happy to pour on the pressure or work off the back foot, he cannot switch off for a moment, as he did in his last American outing.
Staying off the ropes and employing a tactic of darting raids to pick Santa Cruz off and rack up a lead in the early rounds is essential, whilst driving the uppercut through the Mexican’s defence when at close quarters.

Frampton’s power, fleet footwork and timing should be the key to unpicking the lock, as it was against Quigg. He faded in the championship rounds against Quigg, which could give some credence to his claims that he was struggling with making the 122lb limit and the Belfast fighter will need to have a full tank to thwart Santa Cruz’s persistent physicality.

Should Frampton emerge victorious with the WBA title, his mentor Barry McGuigan’s old title, then a money-spinning unification clash with IBF featherweight champion Lee Selby at Windsor Park could beckon next summer.

Deontay Wilder in Belfast to run the rule over Tyson Fury