Gabriels had just beaten the reigning champions 4-14 to 0-15, but both spoke about how they would meet again and things would be different. They meet again on Sunday in a repeat of last year's final, which Emmetts won, and things are indeed different.

"I feel that is where we are stronger. If not for individual players, for the squad we have. It is the first time in a long time we have 25 lads and myself and Mark, the selector, we have so many options. We're not too worried about what they have.

"We know we have guys like Eoin Kelly who can win a game, and Mike Ivors, and Dan Markham, who wasn't playing last year which was a big issue for us. He's a top quality hurler. In my eyes he's as good a hurler as there is in London.

"You don't play for Offaly centre-half back and come over to London and become a bad hurler. They will take a bit of watching."

In January, Martin Corcoran took over the management of the Gabriels senior team having been in charge of the intermediate side in 2015. That, and the departure of a large number of players, means there is little baggage from last year's final, while the team is looking forward and not back on the clash in August.

"I don’t think the players have looked back on that," says Corcoran of August. "We went out and got beat by Kilburn in the Championship not so long after that. That game probably focused us more than anything else.

"Since then training has gone very well and I can't fault the commitment given.

"We are just trying to get the club competitive again. That is the most important thing, that we are competitive. That doesn't guarantee you are going to be successful but at least if you are competitive, you put in the effort and the work, you give yourself a good chance. That's all we want, the lads to go out and give it their all." 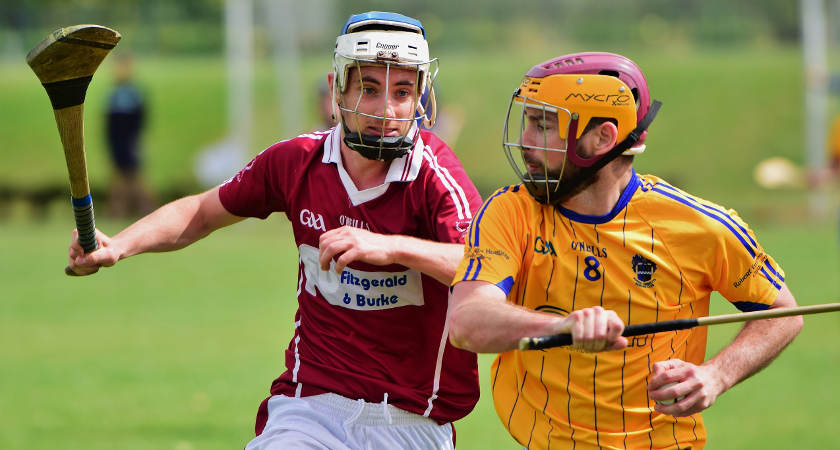 Emmetts v St Gabriels earlier this year [Picture: Sheila Fernandes]
As teams went toe-to-toe with Robert Emmetts this season, they have faltered. Emmetts haven't flinched. Teams dropped a man back but Emmetts’ forwards have worked that bit harder to create the space inside. The man delivering the ball has had to be that bit more astute to avoid the spare man. It has worked.

"A lot of teams have played the spare man against us," adds McMullan. "They took out their corner forward and drifted. We have always said we hold our positions. No matter what. Teams then have had to rethink and go back to 15 on 15, the way it should be played.”

As reigning champions, Robert Emmetts are awaiting the whistle. In training, the whistle signals a dash to a cone with St Gabriels’ name written on it. In Greenford on Sunday, they hope to be crowned champions for the second consecutive year.

For the winner, it represents a shot at an All-Ireland Championship, setting up a shot at the Ulster champions on November 13.

St Gabriels beat the Emmetts in the early rounds of the championship back in August, but come Sunday, neither team will resemble the teams that took to the field that day. From last year's final, Emmetts have retained the majority of their players, but for McMullan the past will stay firmly in the past.

"It's completely different. Last year is not being mentioned. It's a different year. Personally, I was very confident last year. I thought to myself the team we have is a very good team and I can't see how we could lose unless something really goes wrong. Maybe it sounds cocky as a manager to say that but if I don't believe in my players, who will?

"Last year's final, no, I wouldn't mention it. It is a different year, different mentality. Last year we weren't champions. We are now defending champions. We don't want to give that cup up and it's driving the players on," insists McMullan.

"It's the two best teams in London," adds Corcoran, who has had to rebuild after many players left the panel following last year’s Championship.

"We are up against the county champions. They are strong. It will take a big effort to dethrone them. All we can do is get our side right and all we can ask is to go out and do their best. Whether it gets us over the line or not is a different story.