Here's the team Ireland should put out against Qatar

THE IRISH national team are back again tonight, and we wouldn't blame you if you didn't fancy tuning in.

It is a friendly game against Qatar, that comes after two depressing defeats against Serbia and Luxembourg.

And while you may view the game as a pointless endeavour, if the right team is picked, it may act as much more than that.

There are a number of young players that could do with getting used to playing in the green jersey, and tonight may be the perfect chance.

Here's the team we'd go with against Qatar: 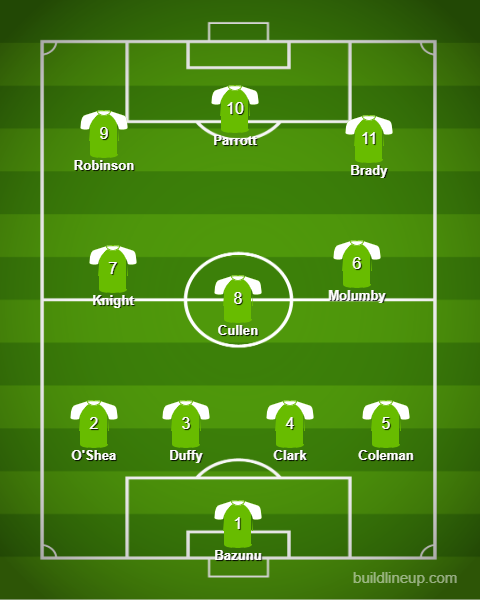 Some key players will miss this game through injury, including Darren Randolph, Matt Doherty, Enda Stevens and Aaron Connolly.

Our back five is fairly obvious, aside from O'Shea being played out of position. But with Enda Stevens getting on in years, a left back will need to be found to replace him, and the versatile West Brom youngster could do the job.

All eyes will be on 19-year-old Gavin Bazunu tonight, after an excellent performance against Luxembourg from the 'keeper.

The midfield three is a trio that we think should make up our midfield for the next few years, with Conor Hourihane potentially coming in for one of them.

While none of the three are particularly creative, Cullen, Knight and Molumby are energetic, and are willing to put in a crunching tackle to win the ball back. They're all still young, and just need to add a killer forward pass to their game, and we'd be flying.

We've stuck Callum Robinson and Robbie Brady on the wings, in the hopes they can create some chances for our striker - Troy Parrott.

Parrott may be the most highly rated Irish youngster around, so we should be getting him a few minutes everywhere we can. He has proved he has the ability at youth level, so it's time for him to show what he can do against the big boys.

Qatar vs Ireland kicks off at 7.45pm tonight.