Here's what a United Ireland football team would like

WHAT WOULD a United Ireland football team look like?

There is an awful lot of talk about a United Ireland these days.

But we're focusing on the most important thing of all - what would a United Ireland football team look like?

Here's what we've come up with:

In goal we've gone with Darren Randolph. We know that he is getting on age wise, but every single time he puts on the green jersey, he plays brilliantly, and has another year or two left in the tank for sure.

We've gone for a five at the back then, to try and fit in all of our best defenders. Seamus Coleman will play in a three at the back, as he did to a high standard during the last international break, while Coleman can cover their lack of pace.

Alongside him will be the two big men - Shane Duffy and Johnny Evans, the two of whom we'd like to think will get rid of any danger that looms.

At full back, we've got Jamal Lewis and Matt Doherty who will both be bombing up and down the wings. Dara O'Shea and Enda Stevens are both very unlucky to miss out, and will provide extremely capable cover.

The midfield is where the side gets its balance. Steven Davis is no spring chicken, but the experience and defensive cover he provides would allow our wing backs to get up the pitch frequently, which is where a lot of the attacks would come from.

Stuart Dallas has had the honour of playing under Marcelo Bielsa, and the two are a match-made in heaven. He is a willing runner, but a real talent then when he gets on the ball. Himself and Conor Hourihane will support the forwards with through balls and efforts from distance.

Up top is probably where the squad is lacking a bit, though it has plenty of pace and energy. If Aaron Connolly and Callum Robinson started putting the ball in the back of the net, we'd be on to something really special. 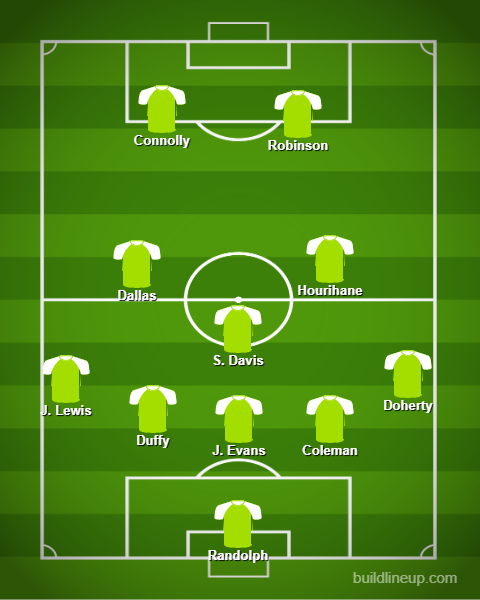 Not a bad side, is it? It would have certainly beaten Luxembourg anyway...