FIFA have launched an investigation following reports that Hungary fans racially abused a number of England players during the Three Lions' 4-0 World Cup qualifying win in Budapest on Thursday evening.

Goals from Raheem Sterling, Harry Kane, Harry Maguire and Declan Rice separated the two sides, but the game was marred, rather predictably, by controversy.

As promised by manager Gareth Southgate, the English players and staff 'took the knee' before kick off in solidarity with the fight against racism, which was met with a chorus of boos from around 60,000 Hungarians packed into the Ferenc Puskás Stadium - just as they did when the Ireland visited for a friendly back in June.

There were reports that monkey chants were aimed at Sterling and Jude Bellingham during the match, prompting former England internationals Rio Ferdinand and Ian Wright to call on FIFA to take action.

The FA released a statement after the game which read: "It is extremely disappointing to hear reports of discriminatory actions towards some of our England players.

"We will be asking FIFA to investigate the matter. We continue to support the players and staff in our collective determination to highlight and tackle discrimination in all its forms."

FIFA have said in a statement: "First and foremost, FIFA strongly rejects any form of racism and violence and has a very clear zero tolerance stance for such behaviour in football. 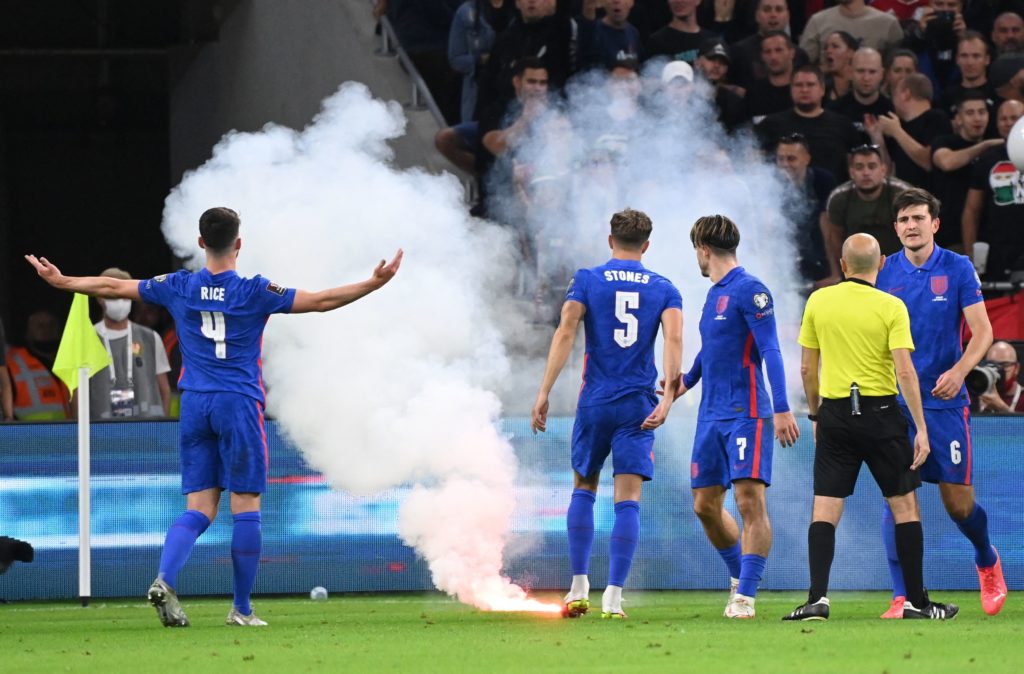 Players react as the game needs to be interrupted due to flares landing on the pitch during the FIFA World Cup Qatar 2022 qualification Group I football match between Hungary and England, at the Puskas Arena in Budapest on September 2, 2021. (Photo by Attila KISBENEDEK / AFP) (Photo by ATTILA KISBENEDEK/AFP via Getty Images) 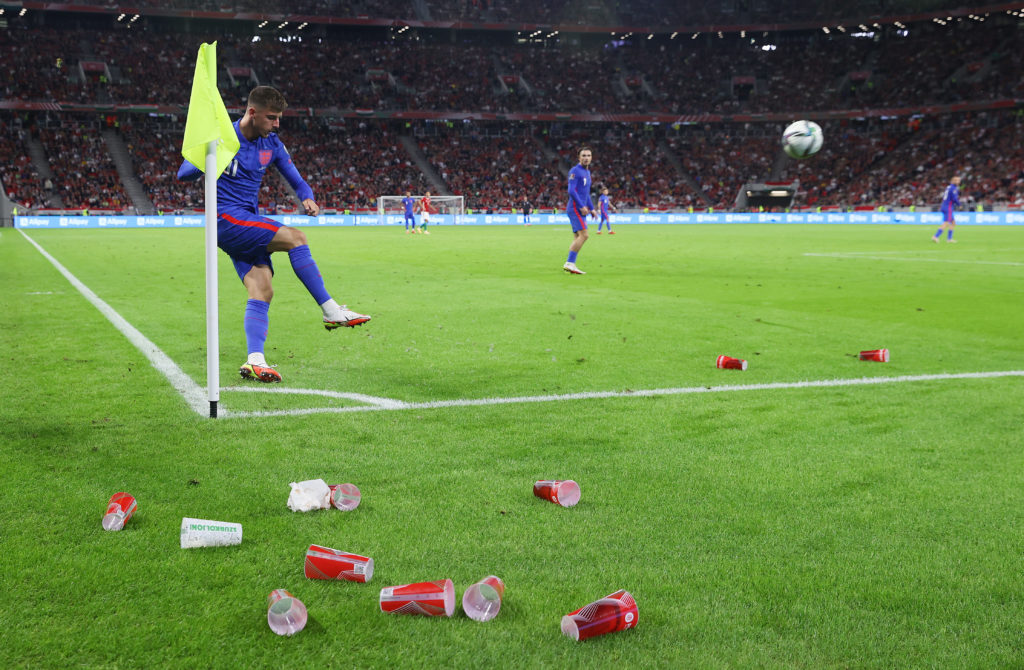 BUDAPEST, HUNGARY - SEPTEMBER 02: General view inside the stadium of cups thrown onto the pitch as Mason Mount of England takes a corner during the 2022 FIFA World Cup Qualifier match between Hungary and England at Stadium Puskas Ferenc on September 02, 2021 in Budapest, Hungary. (Photo by Eddie Keogh - The FA/The FA via Getty Images)

Having already been punished for racist and homophobic abuse during Euro 2020 this summer, Hungary fans won't be allowed to attend their nation's next two UEFA-organised matches, but as this was a World Cup qualifier organised by FIFA, fans were allowed in.

The abuse didn't stop England cruising to victory, mind. In spite of a drab first 45 minutes, the goals started flowing in the second half as Sterling tapped home a neat pull-back from Mason Mount to give England the lead.

As the players celebrated, dozens of beer cups rained down on them as the local fans made their feelings known, prompting Rice to cheekily kneel down and sip from one.

Wantaway Tottenham striker Kane added a second with an improvised close-range header, before Maguire and Rice completed the rout with efforts that squirmed under Hungarian goalkeeper Péter Gulácsi.

The win puts England top of Group I with four wins from four.

Next up is a visit from Andorra on Sunday before a trip to Warsaw to face Poland on Wednesday.