Republic of Ireland U21 head coach Stephen Kenny ahead of the UEFA European U21 Championship Qualifier Group 1 match between Republic of Ireland and Italy at Tallaght Stadium in Tallaght, Dublin. (Photo By Eóin Noonan/Sportsfile via Getty Images)

IF Stephen Kenny was worrying how hard it will be to improve Ireland’s style of play, the recent performances against Georgia and Switzerland will not have provided him with any reassurance.

Kenny, who has been drafted in by the FAI to make changes to Irish football’s DNA, is currently managing the under-21s before taking over from Mick McCarthy after the current  European Championships campaign.

However, with the lack of talent coming through, the task of getting Ireland to play football on the ground rather than in the air is looking more and more herculean for the 47-year-old Dubliner.

Looking on, Kenny must have been in despair as it took Ireland 85 minutes to create a real chance to score in the draw with Georgia and then record just two shots on target in the defeat in Switzerland last week. 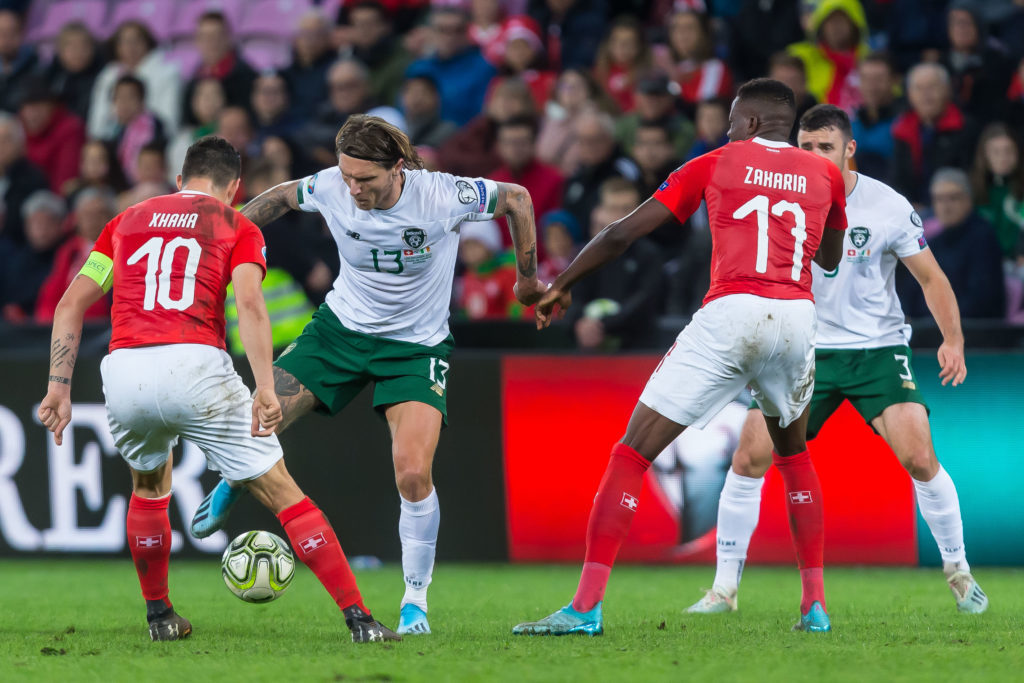 For sure, Kenny, who has only managed in Scotland and the League of Ireland, will need all the optimism and ideas he instilled at Dundalk, where he won four league titles, to turn around a squad sorely lacking in creativity and confidence to pass the ball.

Most concerning is the fact that there is no obvious replacement for the 35-year-old Glenn Whelan, who was the best player in a green shirt versus the Swiss, in the defensive midfield position.

Conor Hourihane and Jeff Hendrick are both solid midfield players who can get a goal, but both are up and down in terms of form and seem unable to keep the ball under pressure.

What McCarthy has been and Kenny will be crying out for is somebody in the middle of the park with a little composure, who can settle the team down in possession.

Indeed, too often this Irish side look hurried and uneasy with the ball.

Despite these deficiencies in midfield, Ireland have been able to compete in recent times by possessing a strong defensive unit and, luckily, that looks set to continue with Sheffield United’s Enda Stevens having fitted in well at left-back during this campaign, while his clubmate John Egan has flourished next to Shane Duffy at centre-half.

Elsewhere, up front, the signs have become more encouraging in recent months, with Tottenham’s 17-year-old Troy Parrott is developing well in the underage teams and Brighton’s Aaron Connolly has burst on the scene, scoring two goals against Spurs a couple of weeks ago.

Unlike others before them who flattered to deceive, Obafemi and Connolly appear to have not only the physique to become top players but also the drive and resilience -something you could often question of past Irish youngsters who have come to play in England in recent years.

With Matt Doherty of Wolves finding more game time, Kenny will hope he has the basis of a younger, more adventurous squad when he takes over.

But the lack of midfield quality will be an obstacle hard to overcome, as his predecessor McCarthy knows only too well.