PICTURE this scenario. You have just posted a decent result at the Aviva Stadium to stay ahead of your Celtic rivals in the race for a European championship play-off spot.

The bookies have responded by slashing the odds on your qualification hopes, despite the fact that a tricky trip to Eastern Europe, and an even trickier visit from the world champions, lies up ahead.

Yet you're hopeful because you are on a roll and the aforementioned Celtic rivals aren't as good as you first thought. However, just when you think you have cracked the code, disaster strikes. That tricky trip to Eastern Europe? You meet with disaster. You lose. And the arrival of Germany? Another defeat. Across the Irish Sea, meanwhile, your rival wins and the landscape in Group D suddenly looks entirely different.

While we are actually talking about the past and the scenario that unfolded for Scotland in June and September, we could just as easily be predicting the events that could transpire for Ireland this weekend. Like them, Ireland must not only deal with the dubious pleasure of hosting the Germans but also with a trek across thousands of European miles in the space of four days.

And while they do so with the comfort of a four-point lead over the Scots, four points may as well be one. Scotland finish up their campaign against Gibraltar, a team with the worst record in this European championship qualifying campaign, one that has earned the nickname ‘The Mrs’ by social media users 'because they kick off every ten minutes'.

Given how a Scottish victory over Gibraltar is as inevitable as a film getting a plug on The Graham Norton Show then the reality facing Ireland is this. They could either; break the habit of a generation and win a competitive match against a team ranked higher than them, or alternatively, pray that Robert Lewandowski continues his sensational recent goalscoring form (the Pole has scored 13 times in his last four games) at Hampden Park on Thursday. Should he do so and Poland win, then it's a play-off for Ireland and a period of reflection for the Scots.

Of course there is a third option. Ireland could surprise Germany, Poland and themselves by winning twice in four days. Do that and they won’t even have to consider the play-offs. But can you see this happening given that 14 years have passed since Ireland defeated a European heavyweight (Holland) in a competitive game and seven years since they even beat a middleweight in Slovakia? 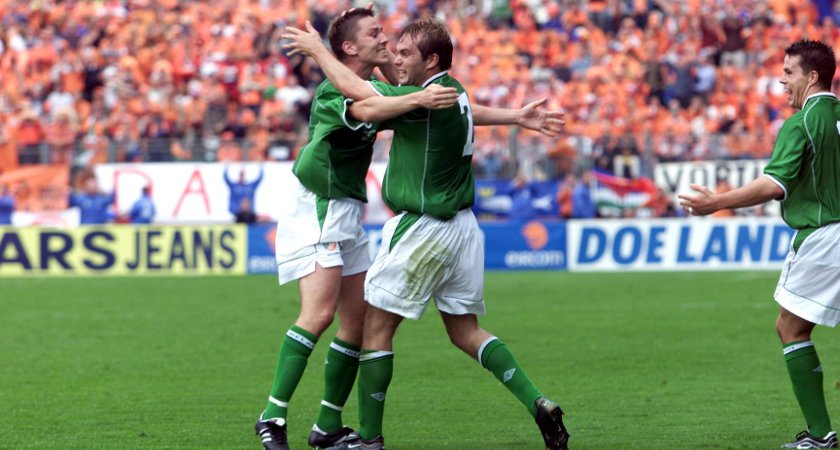 Jason McAteer celebrates his famous goal against Holland [Picture: Inpho]
For the record, their competitive victories since Jason McAteer scored that goal against the Dutch way back in 2001, have been against the following world beaters: Cyprus, Iran, Georgia, Albania, the Faroe Islands, San Marino, Wales, the aforementioned Slovaks, Macedonia, Armenia, Kazakhstan, Estonia, Andorra and of course, Gibraltar.

Along that journey there have been honourable draws – away in Germany last year, away in France in 2009 (when Thierry Henry's intervention prevented Ireland winning a game in extra-time that they led after 90 minutes), and also road trips to France in 2005, Switzerland that same year, Russia in 2011, Italy in 2009, Sweden in 2013, Spain, Germany and Cameroon in the 2002 World Cup. Last minute equalisers have been coughed up against the Italians in Croke Park, Slovakia in Bratislava, Wales in Cardiff, Austria in the Aviva, Israel in Tel Aviv.

"Our intention is to change all that," said Martin O'Neill, who has reversed the trend and turned Ireland into the side who are the new 90th minute champions. Remember Georgia away? Or how about Germany and John O'Shea, Poland and Shane Long? "You can say what you like about us, but we're spirited, we go to the end," O'Neill said. And those late stoppage-time goals – contributing four extra points to Ireland's total in this campaign – could prove vital. The result in Georgia, considering what happened to Scotland last month, now looks considerably more impressive than it did back then.

Quite apart from all that, though, there is a desperate need for Ireland to win, given that it isn’t just qualification at stake but also our national pride. Across the border and across the Irish Sea, the reawakening of Northern Ireland and the Welsh has served as a reminder of what it used to be like when you travelled to Lansdowne Road.

Those victories tied a bond between players and supporters. But since Holland in 2001, that bond has been broken. The inflated salaries of Ireland’s players have been a factor in causing the disconnect but all that would be forgiven if the team could simply go out and deliver a hell-raising performance that caused a giant of the world game to shake with fear and lose a match they would ordinarily expect to win.

Can you see it happening this week? The truth is no. Yet we also expect to see Poland leave Glasgow with a result and Ireland sneak into the play-offs via the side-door. Whether that’s enough to convince the sceptics to believe in this team once again remains open to debate.

We’ll have another month, and another play-off, to find out.