O'Leary says he smiles every time he gets on the water (Image: Sam Barnes/Sportsfile via Getty Images)

IRELAND'S Pat O'Leary reflected on his 'wonderful success' in Tokyo despite narrowly missing out on a medal this morning.

O'Leary finished fifth in the Men's Va'a Single 200m VL3 event, however less than a second separated the Irishman and the three finishers above him.

Australia's Chris McGrath comfortably took gold with a time of 50.537, with Brazil's Giovane Vieira de Paula in second place with 52.148.

However the 48-year-old NUIG chemistry lecturer was delighted with his performance in the decider, saying he hadn't another ounce of energy to give.

"It feels fabulous to have finished fifth," said O'Leary, who is the reigning European champion in the new discipline.

"The important thing for me is to get out of me what I have in me and I really don't think I had another 10th of a second in me.

"There's no such thing as a perfect race but on the day it was as good as I had in me.

"If there are four guys in the world better than me that's fine, I’ll take that. 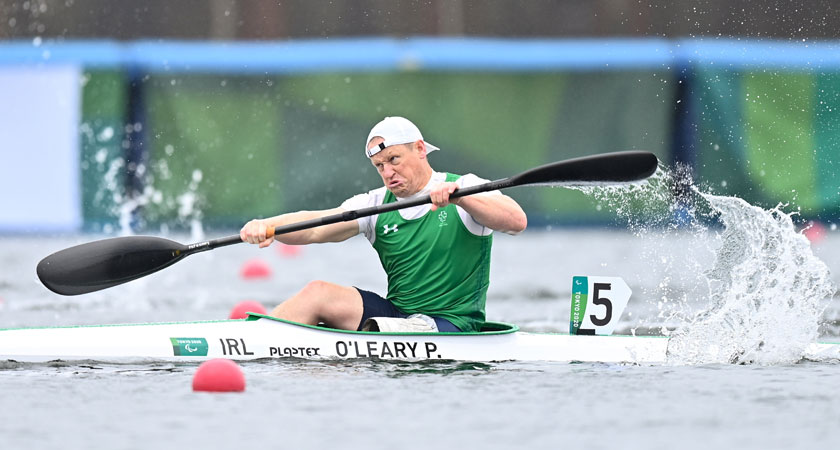 O'Leary gave it everything in the final (Image: Sam Barnes/Sportsfile via Getty Images)

"I knew the shape I was in when I came out here and that's reflected in my performances, so it's been a really wonderful success for me.

"This competition has also been a great advertisement for para-canoe.

"All the races have been really tight and you see the spirit of it as well. It's been fabulous. You just get out there and enjoy it.

"I smile every time I get on the water and before each race to remind myself that this is what I enjoy."

At Rio 2016, O’Leary became the first athlete to represent Ireland in canoeing at the Paralympic Games.

He reached the final of the Men's KL3 Canoe Sprint, finishing in sixth place.

Elsewhere on the penultimate day of the Games, Paralympic debutant Mary Fitzgerald finished in sixth place in the F40 Shot Put.

Meanwhile, Philip Eaglesham narrowly missed out on progressing to the last eight of the R9 Mixed 50m Rifle Prone, finishing in 15th place with a score of 618.3.