Aaron Connolly of Brighton poses with the matchball after scoring a hat-trick during the Checkatrade Trophy match against MK Dons. (Photo by Pete Norton/Getty Images)

AARON CONNOLLY is determined to reward Brighton and Hove Albion’s faith in him by becoming a first team regular.

The Irish youth international – currently on loan at League One side Luton Town – signed a new three-year deal with Chris Hughton’s side this week.

And having travelled with the first team squad to Cardiff just prior to Christmas, the Galway native will be pushing to step up when he returns to Brighton at the end of the season.

Connolly said: “I’ve had the taste of being around the first-team and it’s something I want more of.” 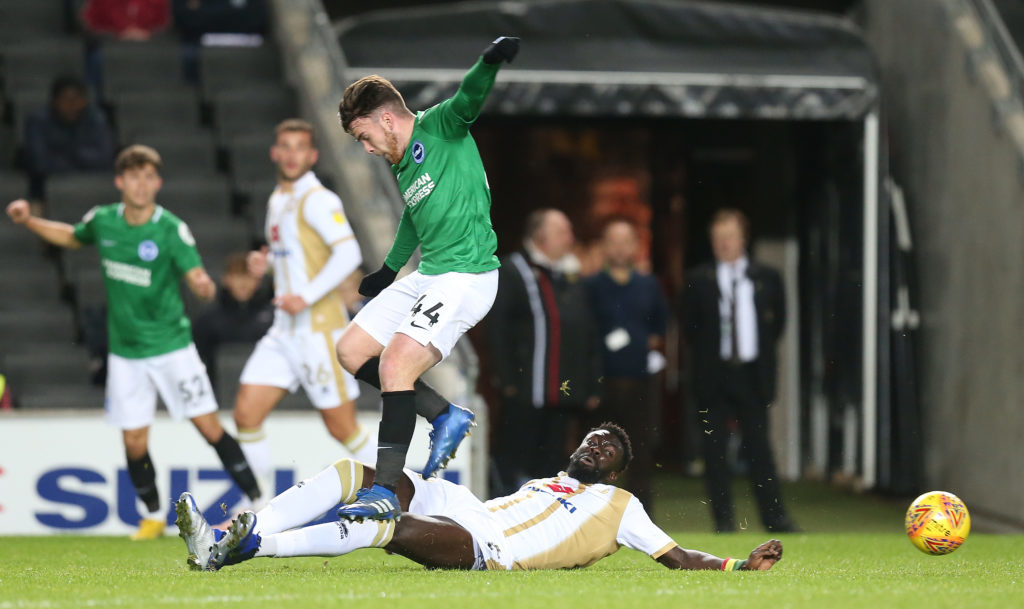 Aaron Connolly of Brighton & Hove Albion U21 rides the tackle of Ousseynou Cisse of Milton Keynes Dons during the Checkatrade Trophy match between the two sides at Stadium MK earlier this season. (Photo by Pete Norton/Getty Images)

“The length of the deal shows the trust that the club has in me. I want to stay here for as long as I can and make the first team over the next few seasons.”

Connolly has impressed this season, scoring 17 goals for Albion's under-23 team this season and earning recognition for the Republic of Ireland at under-19 level.

An injury towards the end of the year temporarily halted his progress and Brighton now believe competitive League One football with Luton will push him on again.

Buzzing to have signed a new three and a half year deal with @OfficialBHAFC, looking forward to the next few years at this club🙌🔵

Brighton Under-23s coach Simon Rusk said: “Aaron has scored consistently for the under-23s this season, as he continues his development, and he deserves this new contract.

“Recently he’s been frustrated by injury, but we hope that it won’t be too long before he’s back on the training ground and out on the pitch, continuing the progress he’s made this season.”