JOHNNY Sexton will take his place in the line-up to face Italy in Saturday’s crucial tie, after recovering from a thumb injury.

Ireland coach Joe Schmidt announced this afternoon that the fly-half will feature in the back-line that started against both Wales and England, after recovering from the injury he picked up in Ireland's defeat at Twickenham.

He also confirmed that there would only be one change to the team that lost to England two weeks ago, for the clash with Italy at the Aviva Stadium.

Iain Henderson will make his first Six Nations start in the place of Munster captain Peter O'Mahony, who is sidelined with a hamstring strain he sustained in the London fixture.

Schmidt said of O’Mahony’s fitness: “I think if this was the last game of the Six Nations we might have risked it.

“If he had trained fully today, we would have included him probably but we decided that caution was required. 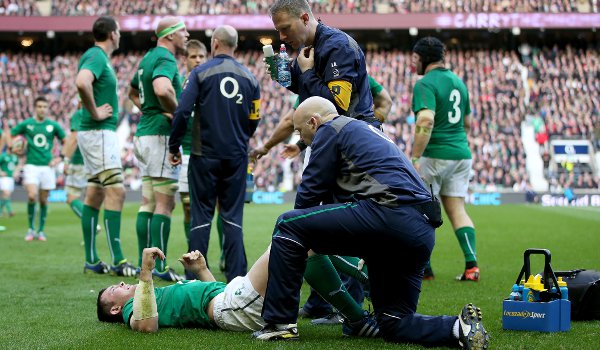 Peter O'Mahony is still injured and will not feature against Italy

Henderson will form a back row partnership with his Ulster colleague Chris Henry and Ireland vice-captain Jamie Heaslip.

Schmidt added of Henderson’s inclusion in the squad: “Iain’s a guy who played in the equivalent fixture last year, good experience he’s a good athlete and made an impact off the bench against England.”

Paul O'Connell will lead the side and features in an unchanged front five alongside Devin Toner, Cian Healy, Rory Best and Mike Ross.

History will  be made this weekend when Brian O'Driscoll becomes the most-capped player in Test rugby history, when he makes his 140th Test appearance (including his eight Lions outings).

There are two changes on the bench with Rhys Ruddock replacing the starting Henderson and Eoin Reddan coming in for Isaac Boss who is rested this week.

Tommy Bowe also trained with the squad today and could come into contention for the final game against France.

“If we got into trouble before next week it was good to get Tommy back involved,” he added.