The Wicklow native has been outstanding for Andy Farrell's Ireland this year. 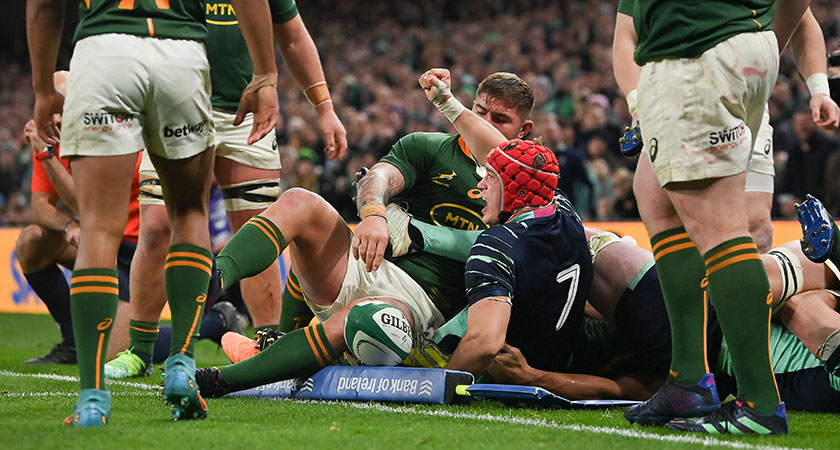 The Irish team won the Triple Crown, recorded a historic series win in New Zealand, and won all their Bank of Ireland Nations Series this month.

The 29-year-old ironically beat Sexton to his second award, France scrum-half Antoine Dupont and South Africa centre Lukhanyo Am were also up for the prize in Monaco.

However Sexton made the World Team of the year. It also included the likes Tadhg Beirne, Van der Flier, Tadhg Furlong

"I've been incredibly fortunate to have great team-mates and coaches that have really pushed me on, as well as my wife and my family supporting me a huge amount," admitted Van der Flier.

"The win over in New Zealand would be right up there in terms of rugby," he added when asked about his highlight of the year. "But my wife is sitting there staring at me, I got married in August, so that has to be at the top!"

In other news Ireland's Terry Kennedy was named 7s Player of the Year.

"The growth has been incredible. We started at the bottom and have gone to the Olympics and then got third place at the World Cup in September," Kennedy said on the same night

"I think it's incredible what we've done in the last few years. Hopefully it can continue over the next few years."

Unfortunately for Ireland, they couldn't make it a hat trick win on the night.

Ireland's head coach Farrell lost out on the World Rugby Coach of the Year award to New Zealand's Wayne Smith.

Smith has transformed the New Zealand Women’s 15s into a potent force once more.

Finally Ireland's Mack Hansen and Dan Sheehan were nominated for Breakthrough Player of the Year, but lost out to Italian superstar Ange Capuozzo.

The 2022 Women's and Men's 15s Players of the Year in partnership with @mastercard#WorldRugbyAwards pic.twitter.com/Sunkoyu6ox