LIONS captain Sam Warburton looked like he was running through treacle in Saturday’s pulsating match against the Queensland Reds and was pretty much ineffective over the course of the game.

It puts Gatland in a bit of a pickle: does he pick his touring captain?

Warburton has been injured for the opening weeks of the tour, and although declared fit for action, looks a shade off match-pace — certainly short of test-match pace anyway.

Warburton always gives the impression of being a “bloody good bloke”, but his form does waver.

Outstanding in the World Cup in 2011, and dignified in the manner in which he accepted his red card in the semi-final, it was there that his Lions captain credentials were so emphatically announced.

But it was followed by a period where he was beset by injury and a performance level that could best be described as average, in particular for Cardiff, where he singularly failed to inspire anything more than listless performances from a team which has been going precisely nowhere.

His captaincy candidature looked to be heading for the mire until he turned things around spectacularly in the last two games of the Six Nations.

Warburton is not helped by the fact that the back-row is a staggeringly competitive area of the squad.

Previous touring matches have seen not one but two outstanding performances in the No.7 jersey, from Justin Tipuric against the Barbarians and Sean O’Brien against Western Force. He has a fight on his hands to even make the squad.

Gatland flagged from pretty early on that his captain need not be picked if form dictated it, but that always looked a touch hard to fully buy into.

Of course he wants his captain on the pitch. It will be a wrench if he has to leave him out. If he doesn’t it will look like excessive loyalty to a player with whom he goes “way back”.

What price the thoughts of Tipuric or O’Brien if they are outside the test squad and an out-of-form player is there in their place? It’s a potentially ruinous call.

Fans of — Sky-hype moment — the rich tapestry of Lions history might recall a couple of captaincy-selection issues on previous tours.

The captain in 1966 was Mike Campbell-Lamerton — he was a Scottish “Alasdair” who was a great guy who everyone liked and was chosen as an ambassador for good old rugger to the empire, but wasn’t worth his place in the side.

He was effectively in charge of the tour as the roles of team manager and coach as we understand them today had not yet come into being.

In the middle of the test series in New Zealand (the tour was made up of two tests in Oz, won 2-0, and four in New Zealand, lost 4-0) he asked the players what they thought he should do — he was advised to drop himself, and did.

We can’t imagine Warburton dropping himself, but it’s worth noting that he declined the Welsh captaincy in the final match of the Six Nations in a bid to focus on his own game.

If he doesn’t make the team, don’t expect a toys-out-of-the-pram situation; all the players will be in a rush to tell the press that Warburton has taken it like a man and is still proving an inspirational leader. 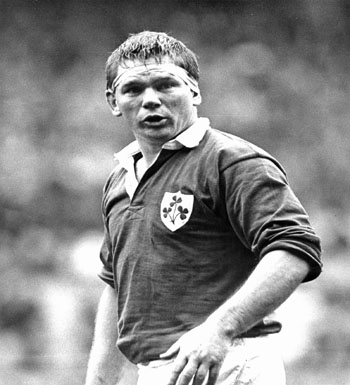 HISTORY REPEATING?: Ciaran Fitzgerald captained the Lions in 1983 when many thought Colin Deans should have started

The opposite happened in 1983, when the captain was Ciaran Fitzgerald (Irish), the manager was WJ McBride (Irish) and coach was Jim Telfer (Scottish).

Colin Deans was by far the best hooker on tour, but Fitz had been selected as captain.

Captain, coach and manager were in charge of selection, so for every test, the vote was Ireland 2 Scotland 1 in favour of Fitzgerald.

The touring press all urged Fitzgerald to drop himself, but he dug in, and WJ spent the whole time backing him up.

The Scottish contingent felt they were on the wrong side of a lot of selectorial decisions, particularly Deans, John Beattie (father of Johnnie) and Jim Calder, and the squad were split — Jocks on the outside.

The Scots stored up their bitterness and used it to great effect when winning the Grand Slam the next season.

It only serves to underline just what a seismic effect selecting Warburton could have.

Given Gatland’s role as Welsh coach, and the easy accusation of Welsh bias, the potential is there with this single decision to split the squad in two: Welshman and the rest.

Lions tours are a short, slightly crazy business, and getting selection right is, obviously, critical. In each of the previous two tours, selection for the first match proved costly.

In 2005, Woodward tried to roll the clock back two years and picked his English World Cup-winning chums. It was so disastrous he rolled back almost entirely a week later, seemingly bowing to Welsh media pressure to pick most of their players, which proved just as disastrous.

Four years later, Geech picked his pack without enough beef. He had two beanpoles in the second row and a tiny hooker in Lee Mears, and watched on as they were mauled backwards 50m to lose a match they should have won.

It was only when +44-SHAWSY was dialled and Adam Jones brought in that the Lions reached their full potential. The great man admitted his error afterwards, and it may well have cost him the series.

Gatland was on that tour and knows he can ill afford a similar error.

For the record, our backrow selection would be O’Brien, Tipuric and — in a particularly close call — Jamie Heaslip.

If that makes Paul O’Connell captain (he isn’t guaranteed a place either — Geoff Parling and Alun Wyn Jones are bang in form), it’s rubbish luck for Sam, but maybe Gatty should have been thinking about who was likely to play in the first place.