LONDON manager Fergus McMahon was clearly elated at the end of this game.

Fergus recalled: “That was our third successive weekend on the road and for working lads it was just too much. Our travel arrangements were difficult and we arrived just over half an hour before throw-in.
We were well beaten that day, but on reflection we were a tired team.”

On this occasion, it was a crisp and sunny day but the game would be dictated by the strong breeze blowing straight downfield towards the clubrooms. London had wind advantage in the first-half and two early points from Martin Duggan and a Kevin O’Loughlin free set them on course.

Down were competing strongly but they shot three early wides and dropped several balls short to Eoin Kelly. Scott Nicholson opened the Down account before London were stung by a 14th minute Down goal; John McManus’ attempt fell short and Chris Egan reacted first to scoop the ball to the net.

But Down’s joy was short lived. In the very next attack Kevin Reid made a fine catch, he found O’Loughlin, who shot past Stephen Keith. Duggan took a fine point before O’Loughlin converted four in a row, three frees and a sweetly struck 50 metre side line cut.

Ger Mahon scored a brace of long range points while Reid’s point was a reward for his selfless hard work. Donal Hughes managed a point for the home team and at half-time the scoreline was Down 1-2 London 1-11. 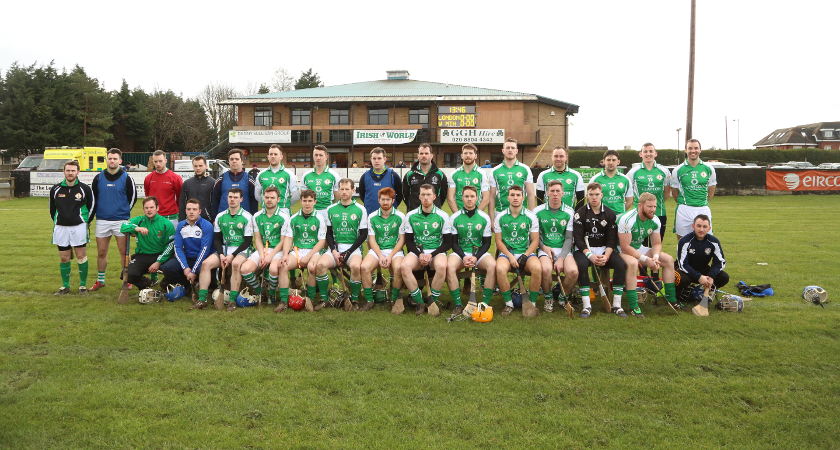 Down had probably contributed to their own difficulties in the first-half. They had withdrawn forwards to crowd midfield and their own defence but this played into the hands of an impressive London half-back line of Mahon, Regan and Lawrence. If the sliotar did get pass them, then London generally had a three to one advantage in the inside line.

A strong reaction was expected from Down but it was a long time before it materialised. Bill Walsh signalled London’s intent with the first point of the second half and for all of the third quarter the teams swapped score for score.

Indeed, by the 55th minute London had stretched their lead to ten points and seemed in control. O’Loughlin and Danny Toner had scored two frees each while Conor Woods and Stephen Dineen had matched points from Shane O’Donnell and a third of the game from Mahon.

However, 21 minutes into the second period, London fumbled a long delivery to their goalmouth and Egan poached his second goal of the day. Daryl Roberts responded with a point but Down started to gain some momentum.

Between the 58th and 65th minutes, Down shot five unanswered points from Conor Woods, James McGrath, Caolan Taggart and two from Paul Sheehan; his second a swerving side-line cut from 20 metres.

Suddenly, and without ever appearing to be in the game, Down were just three points adrift. But as they continued to press they were opened up by a sharp passing movement that released O’Donnell to blast to the net from 10 metres. Toner had the last word with a Down free but the final whistle found London five points to the good.

This is a physically impressive and skilful London team with a good work ethic and a seemingly good team spirit from where this reporter was standing. It was a good all round performance and, but for a couple of lapses, the margin would have been more comfortable.

Down manager Michael Johnson said: “With five minutes to go I felt the match was there for the taking. O’Donnell’s goal made it safe for London and over the seventy minutes they probably were the better team. I am disappointed but there were a lot of positives in the game for us, especially in the second half.”

Fergus McMahon was of course much more upbeat, added: “We are on a different journey from last year and looking forward to seeing where it will take us.”

The win saw London set up a home test against Meath in Ruislip this weekend.

Elsewhere, Warwickshire hurlers produced a fantastic result in the opening game of the Lory Meagher Cup, beating Leitrim 3-19 to 1-15.

The squad were put through their paces by Dublin duo Cian Boland and Dotsy O’Callaghan in Páirc na hÉireann last week, and it appears to have paid dividends. They'll look to build on that momentum against Louth at home this weekend.