WITH Ireland sitting on seven points after their first three World Cup qualifiers, Martin O’Neill must be wondering what all the fuss is about amid the criticism of his side’s recent performances.

The back-to-back wins against Georgia and Moldova, which followed up a draw in Serbia in September, leaves Ireland lying joint leaders of their World Cup qualifying group.

Yet despite a good start in terms of points, manager O’Neill has come under fire for his team’s overuse of the ‘long ball’ and a lack of attacking panache.

The performance against Georgia in Dublin was despairing for long periods, whilst in the first game of the campaign in Belgrade, Ireland were fortunate to come out with a draw.

However, in the eyes of O’Neill, many are failing to plaudit the fact that his Irish troops are managing to grind out results, whilst playing poorly.

“I think what's lost in this is that we actually won the game against Georgia, albeit with a piece of brilliance from Seamus,” said the 64-year old after the Georgia win.

“We've just played two games and have gone to Serbia and drawn against a top-class side and got a win at home without playing well. These things (the results) are forgotten about.

“We're not the type of team that is going to wipe the floor with people, we have to fight for everything.”
In many ways O’Neill is right. Ireland do not have the world class stars to take control of games and blow teams off the park.

Under the successful management of Jack Charlton, the Irish team played the long ball, aided with high pressure and aggression, to great success as the then manager acknowledged the team’s limitations in terms of technical ability.

Likewise, more recently, Giovanni Trappatoni also took the ‘results before performances’ approach at the helm as Ireland manager – evidently believing the players he had at his disposal, were simply not good enough to be able produce the free flowing football with success.

Charlton, Trappatoni and O'Neill have each steered Ireland to major tournaments on such a philosophy, which just possibly shows up the criticism of the Derry-man as unjustified.

Incidentally, James McClean, who scored a brace in the win over Moldova, hit out at the Irish media, also claiming that his side do not receive enough credit for their results and that many are living in dreamland. 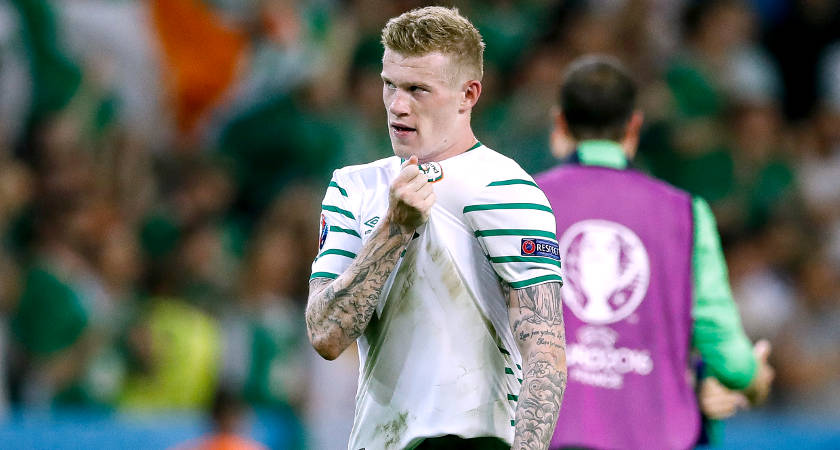 James McClean was Ireland's goal hero in Moldova [Picture: Inpho]
“The Irish media need to have a reality check,” he told Sky Sports. “We are not going to blow teams away, we know that.

“Well, I have always been one of those people who wants to win no matter how we do it. We have seven points after three games. People see Georgia and Moldova as write-offs, but there is no such thing in that in international football anymore.”

The bullish Derry-man’s backlash towards the Irish media certainly has some credibility, as the draw in Serbia, who lead the group, looks even better now with hindsight, as does the win against Georgia, owing to the fact they took a point against Wales on Sunday.

But McClean’s admission that his teammates are not world beaters also carries weight when you consider that 10 years ago, the Ireland team had four players plying their trade at the top four clubs in England – with John O’Shea and Roy Keane at Manchester United, Damien Duff at Chelsea and Stephen Finnan at Liverpool.

Whereas, in today’s Premier League elite, there is not a single Irishman, which certainly damages the prospect of the Irish national side being able to combine attacking football and winning games.

A closer examination of this current Irish squad will tell you that most of the side play in the bottom half of the Premier League and in the Championship, and that lays true to the belief of O’Neill and McClean, that expectations of the Ireland team are simply too high.

Admittedly, the first three games haven’t been pretty, but we are joint leaders, so maybe we should begin to accept that the Irish team has limitations, and get behind the team in their quest for World Cup qualification.