during the London Irish Media Session at Hazelwood Centre on May 4, 2016 in Sunbury, England.

LONDON IRISH CEO Bob Casey believes the club are well prepared for life in the Greene King IPA Championship on the strength of their new-look first team backroom set-up.

The Exiles begin their quest for promotion back to the Aviva Premiership at the first attempt on Saturday as Doncaster Knights visit the Madejski Stadium on the opening weekend of the season.

It’s the first time London Irish have been in the second tier in the professional era, but with former head coach Tom Coventry having left the club, a raft of changes has occurred in the coaching set up.

Perhaps the most notable of those changes has been the return of South African Brendan Venter as Technical Director, while former player Nick Kennedy is now Director of Rugby.

“We had to look at what was best for London Irish,” Casey told The Irish Post. “Tom Coventry is a good man and a good coach, but we felt as though it was best for him to step aside. 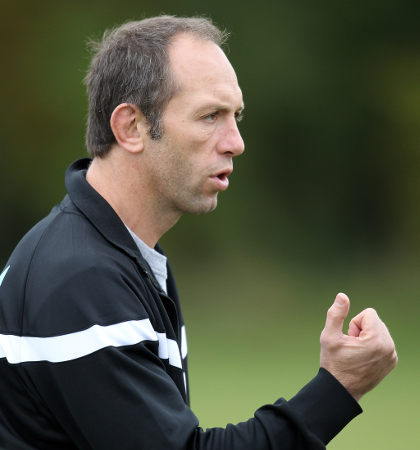 Brendan Venter is back at LIRFC [Picture: Getty]
In particular, Casey is excited to have 1995 World Cup winner Venter back at the club, pointing to his top class work with European Champions Cup winners Saracens, where he previously held the Director of Rugby role.

“We were delighted to get Brendan Venter back at the club. He’s one of the most experienced men London Irish have ever had.

“He’s got experience of setting up a foundation at Saracens, one of the best teams in Europe, and also won the Currie Cup with the Sharks.

“He brings in over 20 years of experience in coaching. He’s been very successful and he knows what it takes to win in English rugby.”

Meanwhile, Irish won all three of their pre-season games – against Harlequins, Nottingham and Loughborough – and Kennedy is now fully focussed on the one that counts this Saturday.

“The guys are really looking forward to getting the season underway – it’s a fresh and exciting new challenge for us,” he said.

“The Championship will be hugely competitive for us, especially the opening game with Doncaster. We’ve got so much respect for Doncaster as they are a very strong side and it will be a very tough game for us.”

As for the players, the changes have been easy to adapt to because of the wealth of experience on offer, according to scrum-half Scott Steele.

“There’s been a lot of changes but ‘Dec’, Paul and ‘Kendo’ coming up to the first team has put a really positive twist on things,” he told The Irish Post.

“They’ve brought a lot of new things into the coaching regime and Brendan is running the schedule and everything on top of that. So I think with the experience that is there, with everyone having been at London Irish through the years, they know the club inside out.

“Everything that they’ve done so far has been good and me and the boys are just looking forward to getting stuck into the league now.”