The Jockey's Journal: 'Willie Mullins and Gigginstown split can be good for racing'

EYEBROWS were raised in the racing world this week when it emerged Willie Mullins and the Gigginstown House Stud have parted company.

Mullins, a champion trainer and probably the best of my generation in my opinion, upped his fees for the first time in 10 years, to which Gigginstown said ‘no’, and with that one of the most successful partnerships in the sport came to an abrupt end.

It means Mullins has lost a whopping 60 horses from under his wing and I don’t think many of us seen it coming, but I actually think it can be a good thing for the sport.

Most of the horses are going to Gordon Elliot and the rest will be divided up between Mouse Morris, Joseph O'Brien, Henry de Bromhead and Noel Meade.

Gigginstown – which is owned by Ryanair boss Michael O’Leary – have said they’re open to working with Mullins again in the future, so there doesn’t appear to be any bad blood there, it’s just business.

But, as I said, it can be good for the sport going forward because it should make things more competitive and, thus, more interesting.

I’m not sure if Elliot or O’Brien will improve the horses they’ve inherited – they are taking them off a champion trainer after all – but they’re very good trainers themselves so they should be able to at least maintain that level and, who knows, sometimes a change of scenery can do a horse the world of good.

This all won’t do the sport any harm, although it’s not pleasant to pick up the Racing Post and see it on the front page, because it’s Mullins’ livelihood at the end of the day.

In today's RP, more on the shock split between Willie Mullins and Gigginstown PLUS your ultimate guide to betting on the Ryder Cup pic.twitter.com/ABOYpzNYJ5

Mullins is an incredible trainer and I can see his point of view – he’s been very successful and probably feels he warrants the extra cost – but this will be a blow to him because he’ll want to be Irish champion and English champion, although he still has an extremely strong hurdling stable.

It did slightly amuse me in one way though; if you go to book a flight with Ryanair, they put their fees up and up every day of the week, yet when Mullins does it for the first time in 10 years, O’Leary is having none of it.

Joking aside, Gigginstown have a company to run and I’m sure they have a business plan in place, which Mullins no longer fits into.

In fact, fair play to Gigginstown, because I don’t think they’re in the racing business to make money, I think it’s fuelled by a passion for the sport, and I say that because they’re so committed to the jumping, which can be hard to make a fortune off of.

And I don’t think Gigginstown will end up regretting their decision. Yes, Mullins is the best trainer in Ireland, but the guys who are taking on these horses are no slouches. 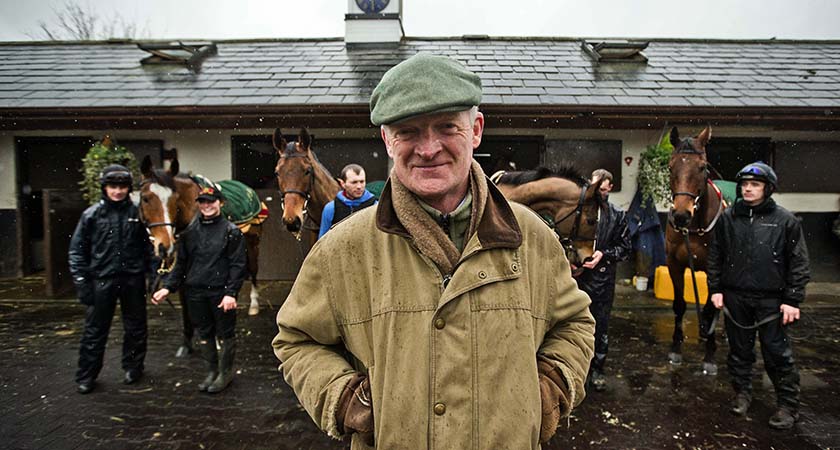 Willie Mullins will survive [©INPHO/Morgan Treacy]
Mouse Morris is what I would call a very old fashioned trainer. It’s a bit like a jockey getting banned for the day and losing a ride to rival – there’s always someone adequate available to step into someone else’s shoes, because it’s a competitive sport.

It’s the nature of racing, and it might even give Gordon Elliot a chance of fighting for the championship.

And Joseph O’Brien is a name that will have to be taken seriously now too. It will be fascinating to see how he progresses over the next two years and which platform he goes stronger on – the flats or the jumps.

He’s a young guy – just 23 – but I definitely think Joseph has the potential to be an Irish champion trainer in the next decade.

Mullins, meanwhile, has lost 60 horses, but I’m sure he'll get another 60 horses to work with soon and he’ll relish this challenge.

I still think he’ll be Irish champion trainer this year.