Republic of Ireland have travelled to Lodz, Poland for their final UEFA Nations League match of the international window against Ukraine.Ireland will be looking to build on the 3-0 win over Scotland at the Aviva Stadium on Saturday with a victory over Ukraine, a team they suffered a 1-0 defeat against last week.Victory for Ireland would put them level on points with Ukraine with two games in the group remaining in September. Match DetailsFixture: Ukraine v Republic of IrelandCompetition: UEFA Nations LeagueDate: Tuesday, June 14Kick-off: 7.45pm (8.45pm local)TV: RTE & Premier SportsStadium: Stadion Miejski im Wladyslawa Krola

Match OfficialsReferee: Ali Palabıyık (TUR)Assistant 1: Serkan Olguncan (TUR)Assistant 2: Ceyhun Sesigüzel (TUR)Fourth official: Hüseyin Göçek (TUR)Video Assistant Referee: Mete Kalkavan (TUR)Assistant Video Assistant Referee: Abdullah Özkara (TUR)Team NewsShane Duffy misses the match through suspension whilst John Egan has stayed in Ireland for family reasons so both defenders will miss tomorrow's fixture. Michael Obafemi is also out of the Ukraine match through injury whilst Chiedozie Ogbene could return to action after missing the Scotland match. Defender Jimmy Dunne has been called into the squad whilst Darragh Lenihan is in contention for his first-ever start for Ireland.What he said - Ireland manager Stephen Kenny"It was a big win for us on Saturday and it is up to us to capitalise on it tomorrow against Ukraine. We know Ukraine are a really good side and we'll have to make changes but we should have confidence which is an important factor."It's a tight turnaround for both teams so we need to train well this evening and be at it tomorrow morning. We'll miss John and Shane of course but it is a good chance for the others to step up."Michael has been ruled out unfortunately whereas Chiedozie is working hard to make himself available for the match so we'll have to see tomorrow and what changes need to be made."What he said - Ireland defender James McClean "It was a brilliant day against Scotland, the atmosphere was electric and the quality of our goals was fantastic. We knew we needed to bounce back after the two defeats so to do it like that was really important."We know the qualities Ukraine possess but going into the game with confidence having scored three goals gives everyone a bit of a lift."To get to 100 caps is definitely the aim. I'm still seven games away so anything can happen in football and you can't take anything for granted in football. The team are improving all of the time so I've got to keep up with that if I'm going to reach 100."We're looking to end the camp on a high and a win would put us back in contention at the top of the Nations League group so hopefully we can get the points." 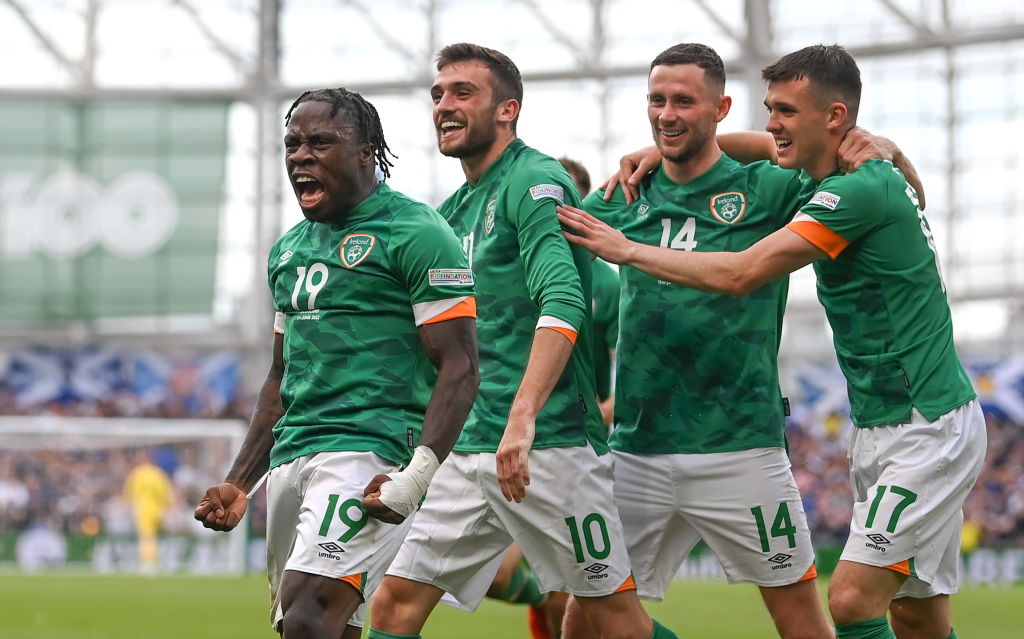 Dublin , Ireland - 11 June 2022; Michael Obafemi of Republic of Ireland celebrates after scoring his side's third goal during the UEFA Nations League B group 1 match between Republic of Ireland and Scotland at the Aviva Stadium in Dublin. (Photo By Stephen McCarthy/Sportsfile via Getty Images)

Watch the full pre-match press conference here...Ukraine v Republic of Ireland - Statistics- In the only previous meeting between Ukraine and the Republic of Ireland, the Ukrainians came out 1-0 winners in the UEFA Nations League earlier this month.

- The Republic of Ireland have never won an away match in the UEFA Nations League in six attempts (D2 L4), only managing two goals across these six matches. Their last three on the road in the competition have all been 1-0 defeats.

- Last time out against Scotland, Republic of Ireland won their first ever UEFA Nations League game at the 13th attempt (D5 L7). They won the game 3-0, scoring more goals in that win than they had in their first 12 such games combined (2).

- Eight of Ukraine’s last nine competitive goals have come in the second half of games, including all three in their 3-0 victory against Armenia last time out.

- Following the Republic of Ireland’s 3-0 victory over Scotland last time out, they could win consecutive competitive internationals for the first time since under Mick McCarthy in March 2019 (1-0 against Gibraltar and Georgia in Euro 2020 qualifiers).

- Since his debut for Republic of Ireland in November 2019, only Callum Robinson (8) has been involved in more goals for the Boys in Green than Troy Parrott (6 – 4 goals, 2 assists). Parrott has made just six starts in that time, averaging a goal or assist every 89 minutes.