A much-deserved September 19 homecoming for Lee at Thomond Park, Limerick was finally scuppered when he contracted a viral infection. The venue was then switched to Manchester for October; however a severe cut to Saunders in sparring put paid to that showdown, and the fight was postponed again until December.

Lee, 34-2-1 (KO 24), is somewhat philosophical about the unusual lead up: “It was devastating that I couldn’t defend the title in Limerick, it would have been a great night, not just for me but for the city. It would have been the pinnacle of my boxing dreams, but it wasn’t to be. Even when I heard about Billy Joe’s cut before the second date I started laughing and thought, ‘it’s just boxing, it happens, it’s happened before, it’ll happen again’. Just look at the postponements Tyson Fury had with David Haye and Wladimir Klitschko.”

The postponements may have benefited the challenger, more than the champion. A less experienced Saunders, 20-0 (KO 12), has had more time to prepare himself mentally and physically for a step up in levels to an arena which Lee has become well accustomed to.

Whilst Lee carries the title, the edge in experience, physical advantages and a superior resume, there is an added dimension to this fight that unsettles the London-born southpaw.

After a career based largely in the States, Lee now takes the big show atmosphere in his stride. The knockout artist has been in the media glare since his debut.

This fight is different. Strictly business but also very personal. The first “all-Traveller” world title fight in boxing history, an expectation from their respective communities to deliver bragging rights and the added pressure of knowing that the result of this fight may define their careers in the minds of domestic fight fans.

Oddly, with almost 40 pro fights under his belt, this will be Lee’s first time to face a British fighter in Britain. Two travellers, two Olympians, two southpaws, two counter-punchers and two boxers who have followed each other’s careers at every step. Suddenly it’s become very familiar, intimate, parochial and new for Lee.

Much like memories of Steve Collins’ loss to Mike McCallum in Boston and his points defeat at the hands of Sumbu Kalambay in Italy were washed away by nights at Millstreet and the Nynex Arena, both fighters are acutely aware that these domestic clashes are the fights that fans remember. The stakes have never been so high.

This edge has manifested itself in the manner of the interaction between the fighters during their multiple pre-fight meetings. Devoid of histrionics, there has been no slagging match and none of the venom Saunders usually spits at his opponents or the chest thumping we witnessed ahead of his victory over Chris Eubank Junior.

The irascible unbeaten Hatfield boxer has already fought two Irish fighters since turning professional in 2009. Before both fights, with Belfast’s Tommy Tolan and Corkonian Spike O’Sullivan, he boasted that he had never and would never be beaten by any Irishman.

He was correct of both of those occasions, but has not uttered this claim to Lee and has employed a more reflective and respectful tone when engaging the WBO title holder.

“This fight is something different for me. Every day in the gym, every session, every fight has been building up to this. Before all my other fights I know I have it in the bag and I could go in there and just do enough and still take the win.

“But now I'm in there with a world champion, and genuine world champion, so I have now got to go and pull something out of the bag that I've never done before in order to take that belt," admits Saunders.

Lee isn’t blind to talents brought to the table by his opponent and believes, “Billy Joe’s biggest strength is his attitude, he’s extremely competitive. He has a real will-to-win and determination, and with this fight he will be even more determined because of the prize that is at stake.

“He has speed and combines that with a good work rate, this and his good footwork means he can’t be taken lightly, not to mention that he is real slippery. So he presents a worthy challenge and I’m going to have to raise my game when I meet him. Then do what I do, beat him.”

Unlike Lee, Saunders is not a one punch knockout artist. Despite 12 wins inside the distance Saunders lacks the power or size to trouble Lee and relies on an accumulation of punishment. 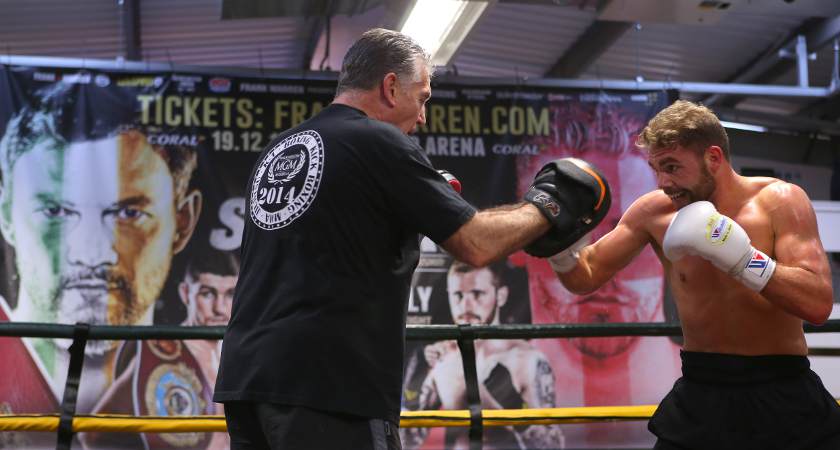 Lee's opponent Billy Joe Saunders looks in great shape [Picture: Getty]
His best chance to overturn the champion is by running up a quick points lead in the early rounds.

Employing rapid keep-busy feints and quick in-and-out foot movement to unsettle Lee, keeping the Limerick fighter off balance whilst potshotting at the taller Irish fighter with sheltered jabs to the chest and body and feverish flurries inside in a hope that that will be enough to carry him across the line to a points decision.

Lee, on the other hand, is from the Teddy Roosevelt school of "speak softly, and carry a big stick." Under the tutelage of new trainer Adam Booth, Lee has used that ‘stick’, his devastating right hook, with phenomenal results against the likes of Matt Korobov and John Jackson.

A threatening wave of that stick should be enough to keep the raiding Saunders at bay. With his long levers Lee can control the distance and manoeuvre the shorter stockier Saunders into a position where he must take chances to get in range of Lee which should present the heavy hitting Irishman with the opportunities he needs to detonate his trademark sweeping right hook.

Fights between two counter-punching southpaws are notoriously negative affairs with long Mexican stand-offs and the awkwardness of a first date, but with so much pride and glory at stake the mesh of styles between Lee-Saunders could have just the right mix of ingredients to be a real Christmas cracker.