STILL in the midst of film-fever after the Oscars, we eagerly await news from this year’s Cannes Festival of forthcoming Celtic-related feature Paradise — described as “Gangs of New York meets Field of Dreams in Victorian Glasgow”.

It was heartening to hear that Paul John Dykes’ book The Quality Street Gang is being adapted for a major documentary film.

M&R films have confirmed they are working on the ambitious project, which is set to be directed by Celtic and Liverpool fan Luke Massey, on the back of his success with war horror film Armistice.

Paul Dykes, who will advise on the project, explains why this particular Celtic account remains so compelling.

“The Quality Street Gang can translate on to the big screen because it is essentially a tragic tale of unfulfilled potential, which many of us can relate to.  Most of us know someone who could have been a contender in football, music, art or life.

“That unfulfilled and damaged friend, schoolmate, neighbour or uncle who threw it all away at the mercy of alcohol, slow horses, loose woman or all of the above, and more.

The story of Quality Street was one which languished in the shadows of Lisbon for too long. But for a generation of supporters who followed the gang, it remains among their most treasured reminiscences.

What made Dykes’ book so undeniable was that it charted the nearly-men, such as George Connelly, Tony McBride and Brian McLaughlin.

Dykes said of McLaughlin: “[His] unfortunate and tragic downfall being prompted by a brutal career-threatening on-field assault at the hands of a journeyman Airdrieonian thug — who is remembered for nothing else in the game — McLaughlin had it in him to be the Lubomír Moravãík of his generation, but his sparkling career was molested and his grotesque injury brought a tear to Jock Stein’s eye.”

While most of us dream about the feeling of what it might have been like to pull on Glasgow’s green and white Hoops (professionally), Paul John Dykes unearthed the men who not only decorated them with class but blazed a trail only to disappear or burn out — often on a wayward path of their own making.

The film will also feature new interviews and fresh insight from the men who became heroes, such as Kenny Dalglish. The support who watched him emerge in Jock Stein’s reserve side continue to rhapsodise about the wonders of ‘King Kenny’ and they never really got over it when the striker left to dazzle Anfield. 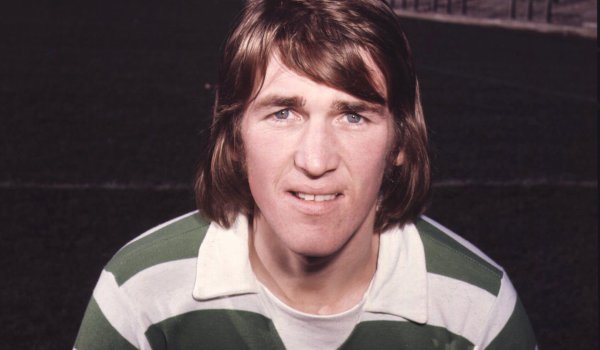 Kenny Dalglish 'King Kenny', pictured here in 1972, will feature in the film

It was there he showed the rest of Europe why he was widely regarded as the greatest player the British game had to offer.

Also confirmed to appear is current Celtic coach Danny McGrain, undoubtedly the supreme right-back of the era — his desire to remain at Celtic when he could have played anywhere has confirmed a special place in the pantheon of greatest ever Celts.

The anticipated documentary film will have no shortage of narrative drive as it chronicles the journey towards Celtic’s second European Cup final against Feyenoord in 1970. It remains one of the finest achievements in the club’s 126-year history to have reached two European finals in three years.

Beyond Celtic fans, the achievement deserves wider public recognition and no-one has done more to transport the nuances to light than Dykes.

A key to the film’s success will be securing a contribution from George Connelly, elusive to this day — he was the player who had talent in spades, was loved by Jock Stein and destined to become a luminary — but he disappeared from view in 1975, making only a handful of public appearances since.

The eminent Celtic documentary film to date remains Lord of the Wing, directed by Jamie Doran. It’s almost 10 years since its premiere on April 25, 2004 at the Clyde Auditorium in Glasgow. It remains one of the best Celtic nights away from the pitch.

There was hardly a dry eye in the house when the film’s subject, Jimmy Johnstone, appeared himself in tears after the passing just days before of his Lisbon Lion teammate Ronnie Simpson.

A lone piper strode on to the stage while playing Amazing Grace as footage of Simpson and his famous backheel in Lisbon graced the big screen.

The remaining Lisbon Lions took their seats to rapturous applause, alongside then manager Martin O’Neill and many other well-known Celts and fans from the arts and entertainment worlds.

The account was narrated by Billy Connolly with contributions from admiring rivals and friends such as Sir Alex Ferguson, Johan Cruyff, Bobby Charlton, Terry Cooper and Eusébio.

The ultimate story of the fan in the jersey lifting the European Cup is undoubtedly a valuable subject, but the film doesn’t shy away from Jinky’s struggles with alcoholism and the ill-health he suffered with motor neurone disease when his time in the spotlight was over.

Striking the difficult balance between triumph, tragedy and hilarity, Lord of the Wing remains necessary viewing.

The film charts the social and political changes of the 1990s, culminating in United’s 1999 European Cup conquest.

The talking heads feature some diverse and entertaining choices — everyone from Mani (Stone Roses) to Tony Blair, but the real star is Scholes who grants the film-makers some rare and vital perception.

Similarly Dykes’ subject The Quality Street Gang allows the quiet men and sleeping giants to stand tall while examining the working class culture that moulded Stein’s Celtic in the ’70s.

See More: Celtic, Film, One For The Bhoys, Paradise, The Quality Street Gang