WE can sometimes get lost in the eternal seriousness of football.

The famous quote from Bill Shankly: "Some people think football is a matter of life and death. I assure you, it's much more serious than that," is echoed throughout dressing rooms, training pitches and half-time-pie queues the world over.

But football isn't all that serious when you actually stop and think for a second. We experience enormous joy and immense despair, the likes of which are unmatched in most other aspects of our lives. But football, basically, is just a bit of fun.

And a brilliant way to stop us forgetting that, is to watch outfield players forced between the sticks looking as flustered as a seven-year-old who's fallen off her chair at her very first violin recital. We're talking telling Cristiano Ronaldo that Messi is better than him-levels of uncomfortable.

Occasionally, if a keeper is injured, sent off or is just looking to beat the traffic home to catch the latest episode of Fair City, we're treated to the hilarious sight of 'good old [insert name]' swapping their trusty, trim, slim-fit M for an oversized bigger-brother hand-me-down style double XL keeper's top.

The kit change is enough to make you chortle ('doesn't he look weird in them gloves?'), but outfielders being forced in goal is a rare moment where we're all able to link arms, come together and appreciate the silliness of what's actually going on.

While it very rarely happens, it turns out the Irish are quite good at playing guinea-pig, often being the first to offer themselves up to don the baggy chainmail of bravery, and here we've managed to cobble together seven examples of where, for better or worse, an Irish fella has been plopped between the posts and has given it right old go:

It turns out that 'Big Niall' is multi-talented. We already knew that of course given his smooth transition from loveable ginormous heading-machine to even more loveable upstairs football businessman. But in 1991, Man City fans realised his hands were as valuable as his forehead when he was forced to replace goalkeeper Tony Cotton after he was sent off, conceding a penalty in the process.

Quinn, having put City 1-0 up earlier in the game, was immediately tasked with keeping things that way. Derby's Dean Saunders stepped up, but the Irishman got down quickly to his left and brilliantly parried the shot wide of the post. City held on to win the game, relegating Derby in the process! Fantastic stuff. (Skip to 3:30 for the save)

United were 4-0 up with just a few minutes to play when O'Shea was forced to put the gloves on, so unlike in Quinn's case, the stakes weren't exactly high, but it still made for some entertaining viewing. When fellow Irishman Robbie Keane's knee accidentally collided with Edwin Van Der Saar's face, the Dutchman looked groggier than your Nana after her fifth whiskey on Christmas Day, and he had to come off. Only problem was, United had used all three subs.

O'Shea grabbed the aptly coloured green top and flapped at a few crosses, looking - to put it lightly - a little flustered. His best moment was rushing out of his goal to tackle Keane, in a move which made us all wonder why he bothered dropping back to the goal-line in the first place.

Steve Staunton - for Liverpool vs Everton - 1999

Handbags between Liverpool goalkeeper Sander Westerveld and Everton's Francis Jeffers, and the fact that Liverpool had used all their subs, meant that Staunton was faced with 15 nerve-rattling minutes trying to keep his Merseyside rivals at bay.

The Irishman pulled off a wonderful reflex save from Abel Xavier, and while he managed not to concede, the Reds couldn't stop their local rivals from leaving Anfield with all three points, as a young Steven Gerrard was also sent off late on. (Skip to 0:52 for Staunton's stint betwixt the sticks - and check out a more HD version of O'Shea in goal on this video too)

Eight years after his heroics for Man City, Quinn was at it again after replacing Thomas Sorensen in goal for Sunderland for the final fifteen minutes of a match against Bradford. Just as he'd done in 1991, he'd put his team 1-0 up before switching positions, and while he didn't save a penalty, Quinn kept a clean sheet for the final 13 minutes of the game.

Apparently, Quinn's prowess in goal is hardly a secret to those who train with him. In fact, Jack Charlton named him as Ireland's third-choice goalkeeper during the 1990 World Cup. He's no Packie Bonner, but with a 100% clean-sheet record and a penalty save to his name, is he understatedly the best goalkeeper who ever lived? I'm not suggesting that he must be, all I'm saying is, he probably is. 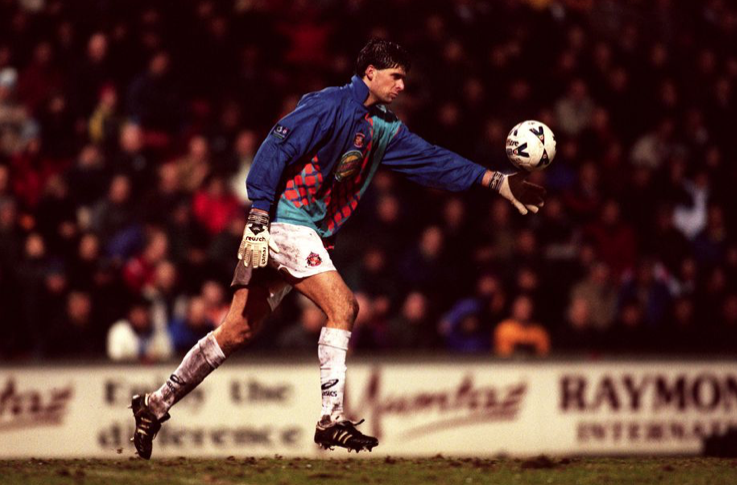 Okay, we're slightly cheating here. We know he's English. But he's got Irish blood, and we're convinced it's the Irishman within him that inspired to him grab those gloves in the first place. Long before he was England's favourite son, Tottenham were cruising in a Europa League tie against Asteras (remember the Europe League, Spurs fans?), and  leading 5-0 with just three minutes to go when goalie Hugo Lloris was shown a red card.

Kane stepped up to save the day, and ... let's just say, he tried. Immediately facing a free-kick, the future England captain let a fairly tame strike somehow slip beneath his grasp and creep across the line. Don't quit your day job, Harry! (Maybe he isn't Irish after all)

Vinnie Jones - for Wimbledon vs Newcastle - 1995

Again, he never donned an Ireland jersey, but he could've played for us, and indeed wanted to play for us until Wales came a-calling. Jones has certainly demonstrated he isn't afraid to try his luck at something new. His successful Segway into Hollywood in the late-nineties showed his grasp of a movie-script is as good as his grasp of Paul Gascoigne's testicles!

After a frankly stupid challenge by keeper Paul Heald on Newcastle striker Les Ferdinand, which lead to a swift dismissal, Jones was handed the part. On the face of it, having conceded three goals in a 6-1 loss makes it look like an awful day at the office, but Jones was surprisingly effective and (in hindsight) predictably adaptable in his new role. He made a cracking double-save which would've made Shay Given proud, and flung himself at every strike that came his way. In classic Vinnie Jones fashion, it was nothing but entertainment.

Again, not strictly Irish, but another who could've turned out for Boys in Green had he wanted to (and had Ireland's midfield been absolutely desperate). During a Championship fixture against Reading, Derby keeper Stephen Bywater went off injured before substitute goalie Saul Deeney was sent off and conceded a penalty.

Savage grabbed the gloves and faced a penalty against Irishman Shane Long, who sent his strike over the bar. The blonde-haired midfielder remained in goal for 45 minutes and conceded twice as Reading ran out 4-1 winners, but Savage came up with a couple of fabulous saves to keep the score from getting embarrassing. (Skip to 3:41 for the Savagery ... get it? ...oh sod off)