For Dennis Taylor, the Crucible Theatre has almost become a second home. It’s been there, across 42 years, where he has evolved from a young snooker player to an experienced commentator for the BBC.

Over five different decades, the Tyrone native has many memories to behold in Sheffield but one stands out more than most. The year of 1985, when 18 million people watched him beat the leading player at the time, Steve Davis, on the final black ball to win the World Championship, in a match widely regarded as the greatest ever.

This year marks 34 years since that iconic night and Taylor, in an exclusive interview with The Irish Post, says he will never be able to forget it, mainly because of the memorable celebration which followed the winning pot.

“I don’t need to remind myself I’m a world champion,” says Taylor. “There’s not a day that goes by that other people don’t remind me, no matter where you are. There are always three things they do. Put a pair of glasses on and turn them upside down. Or they shake an imaginary cue above their heads. Or, lastly, they wag their finger at me. I really hope they continue to do it for a few more years.” 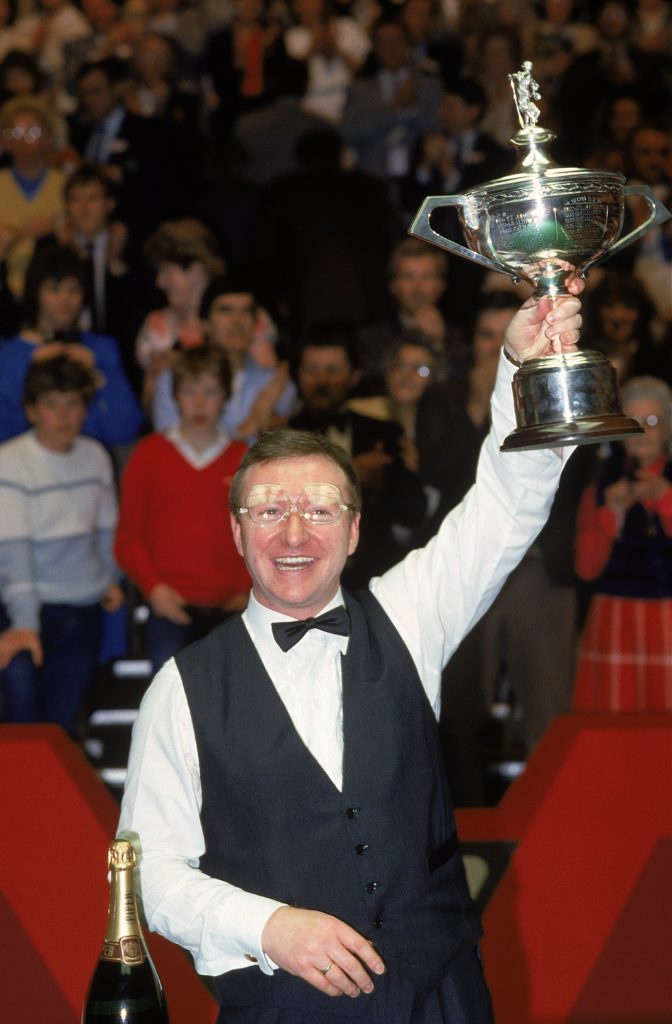 On Saturday, Taylor will be in the commentary box, opening the coverage to another World Championship for the BBC. Behind the mic, the 70-year-old has become part of a generation or two’s childhood, easily distinguishable by perhaps his most used phrase: “where’s the cue ball going?”

Despite not being a participant anymore, coming to the Crucible, Taylor still craves the buzz of the World Championship and has embraced his media role. Yet, contrary to common belief, his commentary career didn’t start upon his retirement from the main tour.  But, by chance and maybe fate, over 40 years ago at a UK Championship.

“People think I just started commentating when I retired but I was thrown in at the deep end 35 years ago when someone was taken ill at the UK Championship and a producer asked me would I like to step in to the commentary box. 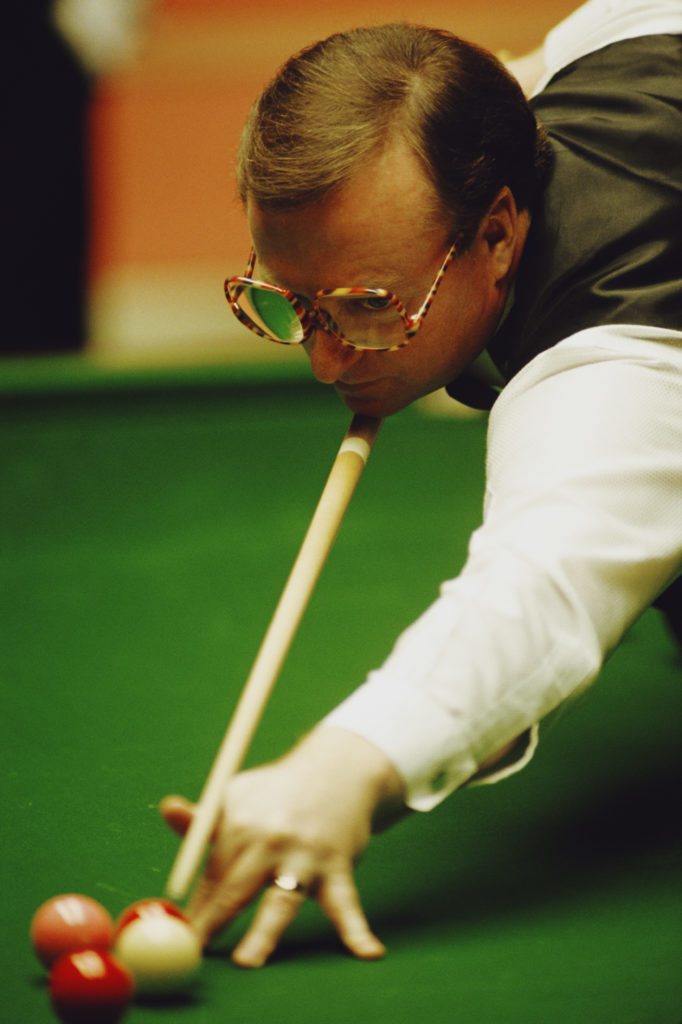 Dennis Taylor lines up the cue ball during his World Snooker Championship second round match against John Parrott on 22 April 1989 at the Crucible Theatre in Sheffield. (Photo by Howard Boylan/Getty Images)

I was put next to the voice of snooker, the whispering Ted Lowe which was great. I just love commentating.”

The fact that Taylor still plays on the Senior Tour today also shows how much he loves snooker. Hence, he must be proud to see where the game is after a rocky period in the mid-2000s.

Indeed, when Taylor finished playing at the top level in 2000, snooker hit hard times. The eradication of tobacco sponsorship and the success of Sky resulted in less tournaments and less exposure.

However, since promoter Barry Hearn took charge in 2010, the sport has experienced something of a resurgence. Prize money has increased and, virtually, on a fortnightly basis from autumn to spring, tournaments are shown live between the BBC, Quest, Eurosport and ITV4, where over 1.2 million watched Ronnie O’Sullivan win the Tour Championship a few weeks ago.

“The game is certainly in good health since Hearn came back,” says Taylor. “We’ve gone from having six tournaments on the main tour to 30 tournaments around the world. The game is massive in China and, even in Germany, they will get 2,500 attendances.

“People compare it to the mid-1980s, the heyday, when there were only three channels. But it’s still very popular. Just this past week, the World Snooker chairman, Jason Ferguson, was saying 500 million people will tune in to the World Championship across 130 different countries.”

Certainly, one of those countries will be Ireland. Historically, one of snooker’s strongholds, the lack of Irish players, both north and south, at the top of the game is both disappointing and worrying to say the least. 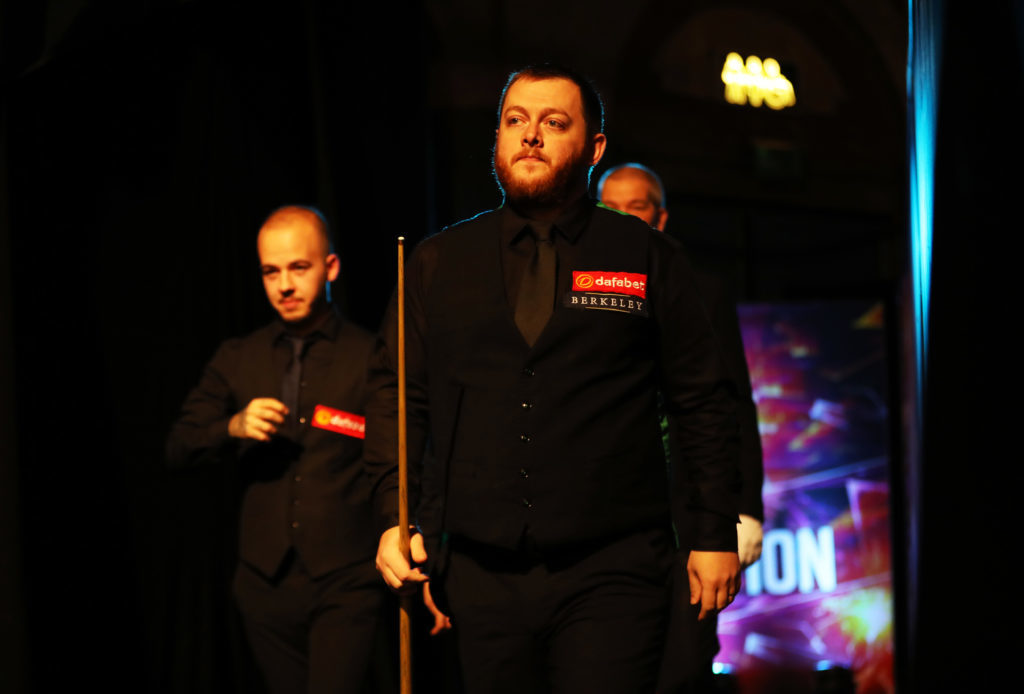 Mark Allen walks back to the table after a break during his first round match against Luca Brecel of Belgium during day one of The Dafabet Masters at Alexandra Palace on January 13, 2019 in London, England. (Photo by Naomi Baker/Getty Images)

Since 1997 world champion, Ken Doherty, has fallen by the wayside, Belfast’s Mark Allen has emerged as the island’s best chance of success. Taylor is hoping Allen can win but believes Australian, Neil Robertson, and world No.1, O’Sullivan, who have both been dominant this season, could be just too strong.

“Allen is capable,” says Taylor. “I’d love to see him win it. He won the Masters last year, becoming the first Irish player to win it since I did against Alex Higgins in 1987.

"He’s also won two World Opens so he’s got the game to win the World Championship. Judd Trump is in good form, but Robertson has a great chance and O’Sullivan, if he can keep focused, will be hard to beat.”