THE All-Britain final will be another London vs Scotland affair after Glasgow Gaels and Thomas McCurtains came through their respective semi-finals last weekend.

With the incessant rain ruling out any games at a waterlogged Pairc na hÉireann, Erin go Bragh stepped in to host games at Holly Lane on a pitch that held up very well given the rainfall.

Played in front of former New York Chairman and GAA Presidential candidate Larry McCarthy, a high noon start heralded an intriguing encounter that was only settled thanks to a late goal from Glasgow substitute Ryan Slavin.

Richie Stevenson was nerveless from the set piece and he converted the first of six frees for the afternoon with a fine opening score. 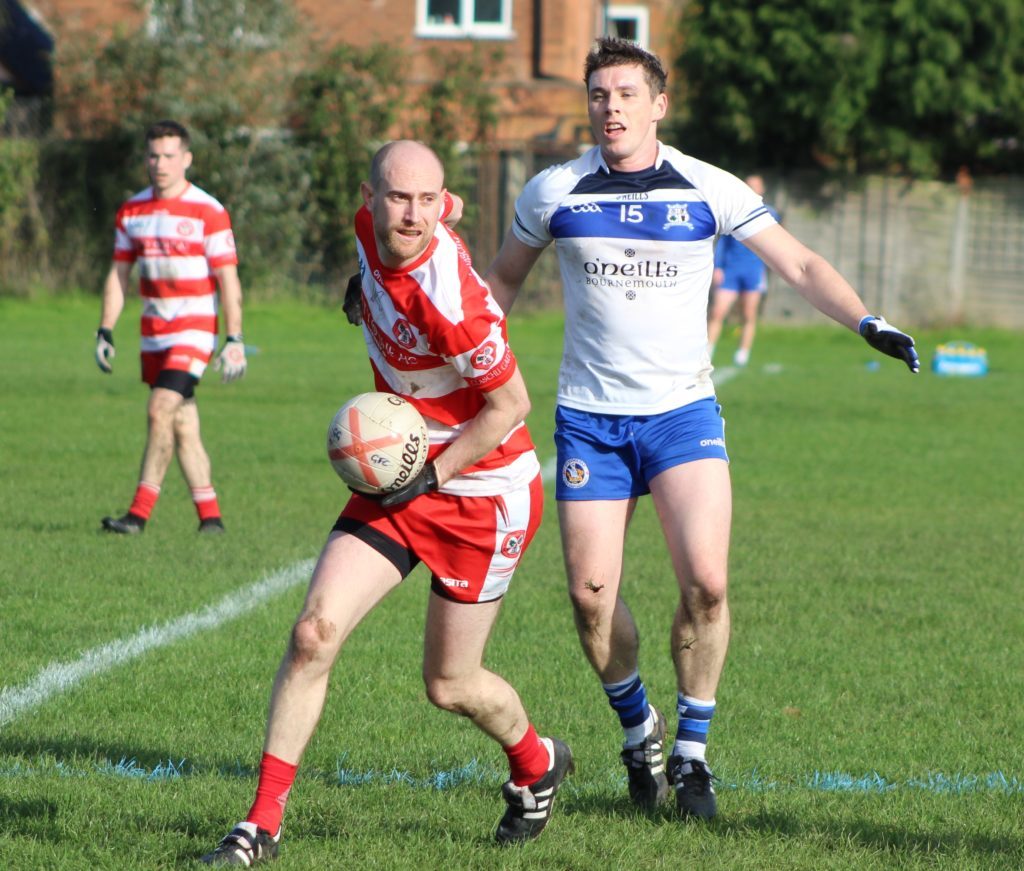 Playing up the hill, St Jude’s were creating all sorts of havoc in the Glasgow rear-guard with penetrating runs on goal but they were left to rue three missed opportunities before eventually landing their first point from a Brendan Agnew free.

Sean McCullagh, who was black carded midway through the first-half, went agonisingly close pulling a shot across the face of Paul Ferris’ goal before a point-blank Agnew shot was superbly saved by the Glasgow goalkeeper; additionally, Glasgow needed to scramble the ball away to safety to deny Jason Cott.

Glasgow finally got to grips as they edged into a three-point lead thanks to four scores (two frees) by Stevenson and a response at the other end from McCullagh.

Thomas Fitzpatrick was relieved to see an Aidan Kerlin effort cannon back off a post but the Gloucestershire champions continued to threaten when substitute Ferghal Kineavy somehow rolled an effort wide of target.

A reinvigorated St Jude’s hauled themselves level as the second-half got into full swing. Kieran Doyle got things going straight from the start before Daniel MacBeth launched a thunderbolt from distance over the bar and Agnew slotted over a forty-five.

Glasgow responded in kind, Stevenson once again demonstrating his accuracy off the ground with two more frees before forcing a fine save out of Fitzpatrick.

St Jude’s continued to press but for the remainder of the game could only find scores from frees, Agnew striking two frees which were cancelled out by two Ian Feerick frees.

It was in the final quarter that Glasgow showed their quality in retaining possession and playing the game in the right areas of the field; they struck the critical blow five minutes from the end when a looping ball dropped into the goalmouth where Slavin rose highest to flick into the net.

The margin was now seven and in truth it took the game away from St Jude’s who kept battling to the very end, Agnew blasting a close range free into the roof of the net in added time.

Had St Jude’s taken their early goal chances, the destiny of this game may have been very different. Nonetheless, Glasgow Gaels got the job done and they will return later this month aiming for a maiden provincial title.