Steve Collins: ‘Carl Frampton can be the best boxer in the world’

LEGENDARY Irish boxer Steve Collins believes Carl Frampton can become the best fighter in the world on the back of his WBA world featherweight title win.

The Belfast brawler nicked the title from Mexican-American Leo Santa Cruz at the Barclays Centre in Brooklyn, New York, last Saturday night, becoming a two-weight world champion in the process.

Collins is the only other boxer from the Emerald Isle to have been a world champion in two different weights, with Frampton being the first from the North of Ireland.

The majority decision win made Frampton a household name overnight in America, and former WBO middleweight and super middleweight champion Collins has backed up Barry McGuigan’s claims that Frampton is on the right path to becoming the best ever Irish boxer.

“I’m absolutely thrilled for him because he’s a lovely kid and a great fighter,” Collins told The Irish Post. 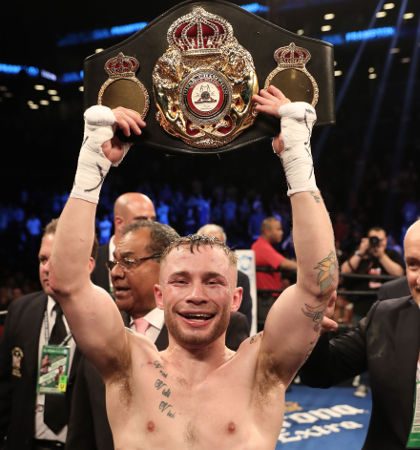 “Look at his record, he’s only had 23 fights and he’s a two-weight world champion at the age of 29, you can’t underestimate that.

“He’s still got around 15 fights left in him and he can go and win a third world title in a bigger weight if he wants to. Look at the shoulders and the build on him. He can be as good as he wants to be.

“He’s got the work ethic, the dedication and the right team around him.”

Frampton, who partially unified the super bantamweight division with a win over Scott Quigg in February, has no shortage of options on where to go next, but Collins believes he should cash in on another American adventure.

“He’s conquered the east coast now, so maybe he should go and do the same in Las Vegas,” added Collins. “Why not go where the money is?”