Having been killed in the Great War in late October 1915, the revelations are thought to be the first widely publicised details of Rossiter's life as a GAA man, and as an Irish Guard.

A quick, strong and skilful forward, Castlebridge man Rossiter had made a name for himself in GAA circles amid Wexford's Leinster Senior Football Championship win in 1913, their first title in 20 years.

It proved to be the first of six consecutive provincial titles, but the Model County would go on to lose the All-Ireland final to Kerry that year in what was the first final to be staged at the newly revamped Croke Park, which had just changed its name from Jones' Road.

Nonetheless, it was the beginning of a golden era for Wexford, who went on to become the first side to win the Sam Maguire for four consecutive years between 1915 and 1918. But, sadly, there was to be no All-Ireland winners' medal for Rossiter due to the alternative life path he chose.

Although he helped sow the seeds of a fine generation for his county, a second successive All-Ireland final defeat at the hands of the Kingdom in 1914, after Kerry's Dick Fitzgerald had salvaged a late draw in the first meeting, proved to be Rossiter's last act as a footballer.

By September of 1914, Britain was already at war with Germany, and during that month the British government suspended any notion of implementing Home Rule in Ireland, largely due to the number of men they were losing on the front line.

They needed help from Ireland. Or, to put it morbidly, they wanted greater numbers to sacrifice. Irish nationalist politician John Redmond suggested the Irish Volunteers should oblige as it would help build relations with Britain, who he felt in turn would grant Home Rule for Ireland after the war.

To say it divided opinion would be an understatement, but one of those on Redmond's wavelength was his fellow Wexford native Rossiter, himself a member of the Irish Volunteers.

Sean Etchingham, who was president of the Wexford County Board at the time, was extremely critical of those who so much as contemplated helping out the British Army.

“He argued that no honourable man should ever support recruitment into the British forces and in a direct reference to Rossiter he talked about former players having a 'grave in a foreign land',” writes Walker. 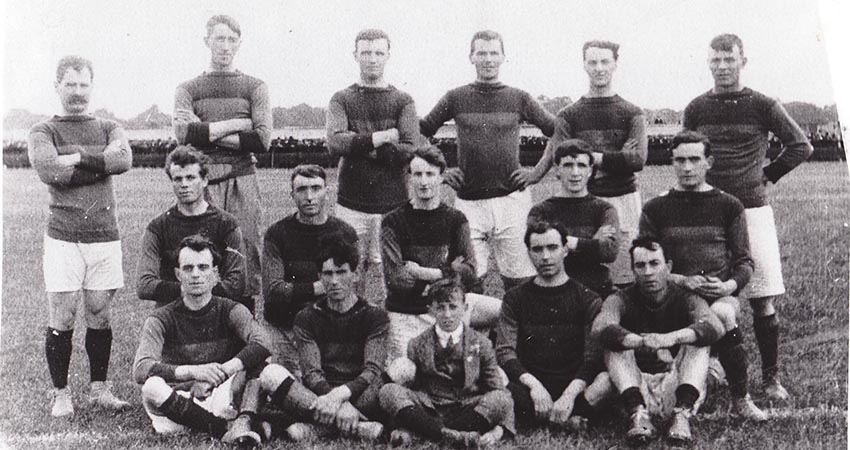 Jimmy Rossiter (Middle row far left) with Wexford GAA [Picture courtesy of Pete O'Connell Media]
It cannot be said with any real degree of certainty what Rossiter's motivation was for joining the Irish Guards, who made history just last month by becoming the first British Army regiment to gain affiliation for a GAA team.

Many young Irish men signed up to fight for Britain for various different reasons at the time. Some needed a guaranteed wage to provide for their family, others simply followed the lead of their friends, but Rossiter is believed to have sympathised with Redmond's ideals and joined the Irish Guards in early 1915.

He was shipped out to France on August 17 and soon found himself in the thick of the action at the Battle of Loos, the largest British battle to take place in 1915 on the Western Front during World War I.

“In letters home he was able to describe the conditions and how he felt about going into battle,” writes Walker in Ireland's Call, which was released last month. “He related his time in the trenches to his life as a county player with Wexford, and in one letter explained that he was more nervous before he played an All-Ireland final than he was when he was attacking the Germans.”

After surviving the Battle of Loos, which ended on October 14, 1915, Rossiter's luck ran out as he suffered a head injury in a separate battle a week later, which ultimately cost him his life.

Soon after Rossiter's family were informed of his death, local newspapers in Wexford got word of his passing, and the fact that he was a two-time All-Ireland finalist made his death of national interest, with the major newspapers picking up the story thereafter.

Precise figures can not be determined, but many clubs in that era faced testing times as Rossiter was not the only GAA player who signed up to the Irish Guards, giving up their membership in order to fight in the war.

Indeed, the problem became such an issue that the Louth County Board's initial proposal to permit GAA players employed by the British Army to keep playing Gaelic games was seriously considered at the Association's Annual Congress in late 1915.

“Tens of thousands of Irishmen wore the colours of the Crown during the Great War, and when they returned home they came back to a different country,” writes Walker, BBC Northern Ireland's political correspondent. “Attitudes changed after the 1916 Easter Rising, and many war veterans decided to remain quiet about their days in uniform. The politics of the last nine decades resulted in this part of Irish history being hidden.”

Until now, many double lives such as that of Jimmy Rossiter had went largely undocumented beyond ancient newspaper clippings and obscure letters to home, but his tale is just one of a vast collection in the highly recommended Ireland's Call.

Recommended reading: Get yourself a copy of this incredibly well researched book 'Ireland's Call' by Stephen Walker pic.twitter.com/ClCM56fCHj

Four short stories about what happened to Irish footballers after retirement