FOR Topsy Ojo there would be no gentle introduction to life at London Irish.

A boy of 16, he arrived wide-eyed at The Avenue in Sunbury.

“I think it was an under 21s session on a Tuesday night,” he recalls, taking up the story.

“I came here and they said: ‘Jump in — see how you go.’ Nick Kennedy was in the session. He won’t remember, but he shoulder-checked me that night.”

Did you pull Kennedy up on it in later years, I wonder.

These are the winger’s first recollections of a place soon to become part of folklore history as the club ups sticks to Hazelwood next season.

We’re sat in the Avenue’s clubhouse on a sunny midweek afternoon while teammates in pale green training gear ghost in and out of the dining area.

Topsy, fresh from a minor operation on his cheekbone, is dressed casually in a t-shirt and black peaked cap while a heavy dark jacket hides his athletic physique.

The coat, and his unassumingly nice-guy nature, make it easy to forget I’m in the presence of someone who holds the club’s try-scoring record (69), touched down twice on his debut for his country in New Zealand, and, with 212 appearances for the Exiles, closes in fast on Justin Bishop’s all-time record of 280.

(A brief aside: Topsy’s full name is Temitope Oluwadamilola Ojo and usual protocol would dictate the use of the surname, ‘Ojo’; however, as any long-term Irish supporter will agree — it has to be ‘Topsy’.)

Does the Avenue hold any more memories for the 28-year-old?

“There’s quite a few. This is where it all started for me,” says Topsy, as he looks out of the window towards the gym.

“From scoring tries in the ‘A’ league, to being flogged in the gym as a 17-year-old for not being able to lift my own body weight.”

He breaks another big smile, adding: “I definitely think there’s an aura about this place.” 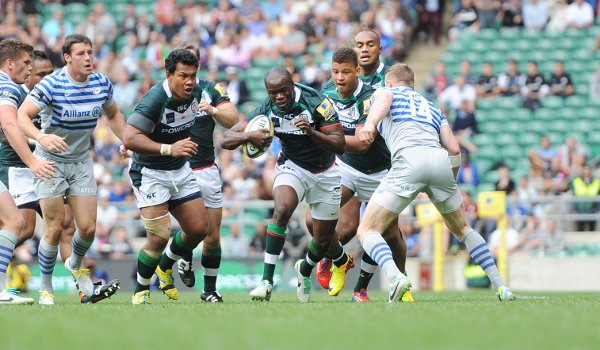 Over the past decade, Topsy has grown into a firm fan’s favourite. Does that still mean something, especially in today’s professional era?

“Yeah it does. They’ve been brilliant to me from day one,” he replies.

“I remember when I first started [playing at the Madejski]. A couple of times I’d hear my name being chanted in the crowd and some of the older guys, like Neal Hatley, would turn to me and say: ‘You know that’s never, ever happened here!’”

So the supporters’ love is something you can really feel?

“Definitely. I can’t say enough of them. Things haven’t always been great here, but they’ve been a constant throughout.”

Topsy has undeniably been a loyal servant through some tumultuous times at the club, a time which has included much talk of ground moves, financial insecurity as well as a periodic departure of many of the talented players developed through the ranks.

Another club stalwart, Declan Danaher, recently told The Irish Post that a pride and passion — and a dose of loyalty — needed to be restored back into wearing the green shirt.

After perhaps the longest pause of our meet, the Tottenham-born player answers: “I understand what Dec’s saying. I think that that’s something that we need to get back to. That’s why it’s been good this year, with the new guys that have come in. The majority of them are going to be here next year.

“Everyone’s now starting to understand and buy into what we are trying to do here. I think recently we’ve lost so many guys that were mainstays here, maybe we just need to reintroduce what it means to play for this club.”

How exactly will that happen?

“It’s something that comes over time and by understanding the heritage and history of the players that have been here before,” Topsy continues, reeling off names like Everetts, Ventner, Hatley, Casey and Kennedy before comparing his own generation.

“Myself, Delon [Armitage], Steff [Armitage], David Paice, Shane [Geraghty] — we kind of took that on.

“Whereas now, in the last two years, we’ve lost pretty much everyone; myself, David and Declan [Danaher] were among the only ones who stayed. It is hard… you need to reintroduce that… to re-emphasise why that [loyalty] is important.”

In his testimonial year, it’s a reflective time for Topsy. I wonder about the strongest team he’s played in.

“Probably 2008/09. I mean, the year we did the Heineken Cup semi and the Premiership Final — those years we were at our peak.”

What was so special about that team?

“We changed a lot of perceptions about this club and about the way we played the game. I’d say up until then teams didn’t really respect us, didn’t really pay us too much attention,” he says.

“Our mindset was just to have a go at teams with no fear, just to really attack them. That season we just boomed and everything clicked.”

Are there any lingering regrets from his short-lived international career? Topsy won only two England caps in total.

“I wouldn’t say regrets, but I would have loved to have played a lot more for England,” he admits.

Did you feel you didn’t really get a good crack at it again; you were playing very well in the years after?

“Yeah, I did. I mean, I would have loved another shot: be it that autumn or in the Six Nations.

“A home international is a completely different entity so that would have been great,” he says.

And while coaching is an area of interest in the long-term future, after penning a new three-year deal at the club last winter, Topsy’s goals remain firmly on the pitch.

Can you see that happening in the next year or two?

As quick as one of his trademark jinking runs from defence, Topsy answers with a final grin: “Yeah, definitely.”

WATCH: Documentary on the GAA's influence on Irish in London past and present