After a shaky opening 10 minutes from the favourites, the visitors from Derry dominated for the remainder of the game thanks largely to first-half goals from Christopher Bradley and Meehaul McGrath.

Slaughtneil will go on to face St Vincent’s, the Leinster champions, in the last four next year.

The Ulster champions started somewhat sloppily, conceding frees for basic errors – a throw-ball and an off-the-ground offence – and Kiernan's sensed some nerves early on.

That allowed the hosts to settle in much better in the opening stages, making the first attempt at target – a wide from Adrian Moyles – before Michael O'Donoghue opened the scoring with a right-footed effort on six minutes.

A poor free from Shane McGuigan added to Slaughtneil's early frustrations, but a much-needed first score from corner forward Christopher Bradley paved the way for them to gain some composer after 12 minutes.

McGuigan made amends for his earlier miss with a simple free moments later, followed by a Patsy Bradley point from play, and from there Slaughtneil never looked back. 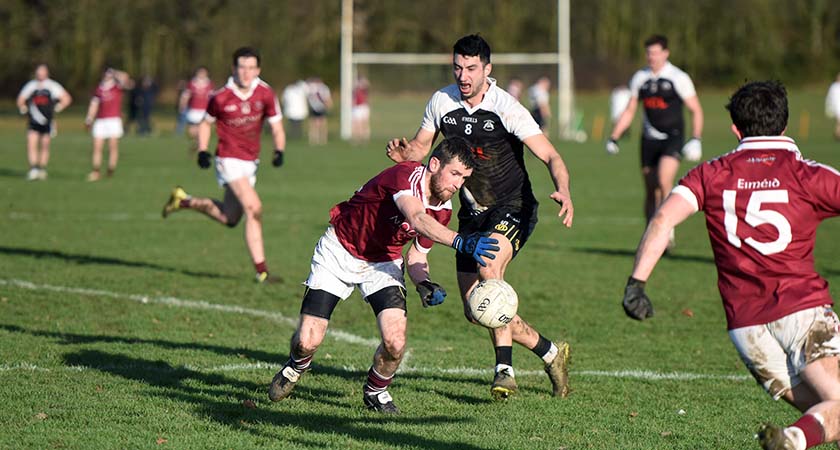 All of a sudden they carried a goal threat too but Brendan Mulrooney pulled off a stunning save from a thumping shot by Padraig Cassidy.

To their credit, St Kiernan's proved their ability to compete with their Derry counterparts for a good 20 minutes, but their confidence was shattered when Christopher Bradley finished off a driving run from Cassidy with a low, neat finish on 23 minutes.

Three minutes later, St Kiernan’s were undone again, this time a misjudgement by the normally dependable Mulrooney in goal, with Meehaul McGrath getting the better of him in the air to palm home Slaughtneil’s second goal.

The visitors continued to build on their lead through points from McGuigan and Cormac O’Doherty, both from play, while the hosts went into the break with just one score to their name at 2-5 to 0-1 down.

They re-emerged with some fight as talisman Adrian Moyles successively sailed over two delightful frees off the ground, but anything St Kiernan’s offered was soon cancelled out by their opponents.

Moyles’ two frees were undone by Shane McGuigan (free) and another Christopher Bradley point from play.

The London team’s uphill task soon became steeper as Dara Quinn received a black card for upending his marker, with Jeff Kingston coming in to replace him, while McGuigan popped over the resultant free.

Slaughtneil took their foot off the gas a little in the second period, but were able to add to their tally regularly through the expert free-taking of both McGuigan and Paul Bradley with either foot, showing their versatility. 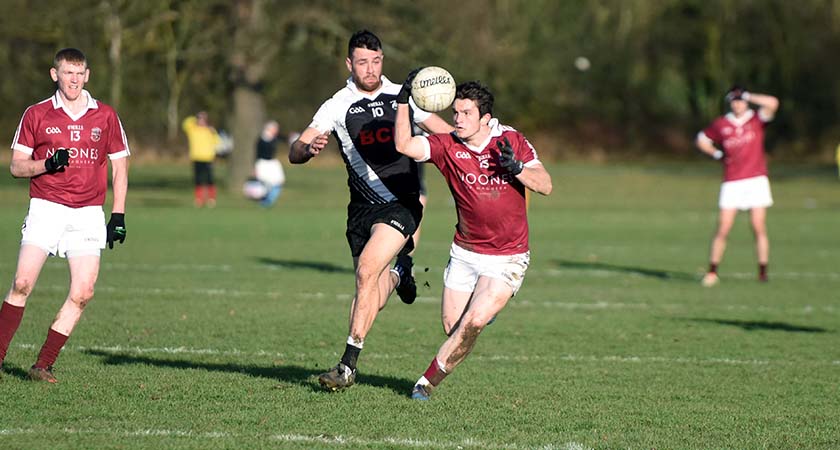 Another Moyles free and a fine point from substitute Tommy Moriarty took a little bit of the bad look off the Kiernan’s tally, but they remained 10 points off the pace at this stage.

Paul Bradley then produced the score of the match – an outrageous effort from a sideline ball, sailing over the bar with distance to spare.

The hosts’ afternoon was summed up when Mayo native Moran received his marching orders for a second bookable offence on 50 minutes, but by then the London outfit were already a beaten side.

Indeed, referee Rory Hickey was a little harsh on Kiernan’s, handing out three debatable yellow cards to Keith Curran, Thomas Waters and Moran, before the latter received his second.

However, that cannot be used as an excuse as Slaughtneil were simply better all over the park.

Two sets of triple substitutions didn’t disrupt Slaughtneil’s flow as the fresh legs brought a patient approach in the latter stages, manager Mickey Moran clearly having one eye on the clock.

Slaughtneil finished the game in complete control of possession, but had lost that ruthless edge in attack, registering a handful of wides before seeing out a 12-point victory.

It was a disappointing end to an otherwise glorious season for St Kiernan’s, who have dominated the senior competitions in London, completing a historic quadruple, including their first ever Senior Football Championship title.

Still, no London side has advanced from the quarter-finals to the last four, but with the work St Kiernan’s are putting in from grass roots level to the very top, they’ll no doubt come back stronger next year if they can defend their county title.

Man of the Match: Christopher Bradkey (Slaughtneil). The livewire corner-forward proved a constant goal threat and his opening major proved the turning point in the match after a bright opening from St Kiernan’s.