A COMPREHENSIVE victory under sunny Nottingham skies has put Roger Casements on the brink of regaining the Warwickshire Senior Football League.

With last Sunday all set for a deciding round of fixtures, postponements to two of the three games meant that the league couldn’t be settled.

However, Casements have now concluded their league campaign with four wins out of five to leave them in the box seat to regain the title they last won in 2019.

Only St. Brendans can now pip them to the league – should they win their final game over Naomh Padraig and Sean McDermotts lose to John Mitchels, Brendans would claim the silverware on a better head-to-head record.

If McDermotts and Brendans both win their remaining games to join Casements on eight points, Casements would be declared the league winners with the best head-to-head record between the three clubs.

For Casements on Sunday though, it was a case of ensuring the victory over St. Barnabas and they wasted little time in hitting the front with three early goals capped by a fine Jack Keogh run which ended in a comfortable finish for Paddy Kilkenny for goal number three.

Barnabas had a great opportunity of their own at the other end when Brendan Scally veered in from the left only to see his effort on goal deflect away for a forty-five. 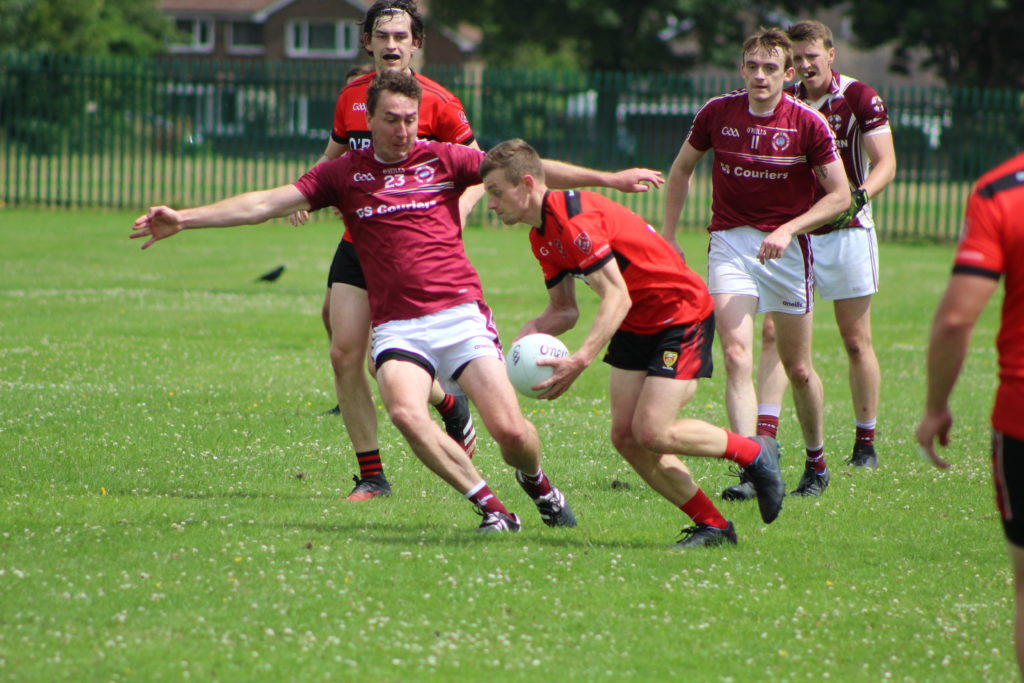 Playing towards the school end in the opening half hour, Casements bagged their fourth goal through a neat PJ Molloy finish before a lofted ball into the goalmouth by Jack Ferron dropped enticingly into the path of the incoming Keogh who lashed the ball into the net.

With the result pretty much secured by this stage, Casements kept pushing forward and grabbed two more goals before the interval including one for the impressive Ferron who was bright all afternoon at wing-back.

It was nearly eight when Tom Massey grabbed the ball to fire on goal, only to be denied by a fine save from Seamus Mills who forced the ball over his crossbar.

At the other end, Eoghan O’Sullivan fired over a free in response but despite a fine score from Liam Hennessy after the sides switched ends the opportunities remained firmly with the visitors who struck three successive scores through Keogh (one free) before the full-forward linked up with Massey who slotted home goal number eight.

Two neatly struck scores, including one from the forty-five, by Rory Smith kept the score ticking over for Casements as Keogh continued to cause problems for the Barnabas back line to loop over two more points from open play.

With the game moving into the closing stages there was a creditable rally from the home side who notched 2-2 after the second water break but the result was not in doubt as Casements closed out their league campaign with their fourth win.

Both clubs will now look forward to their upcoming games in the Senior Football Championship, for Barnabas it is a must-win game against St. Brendans after their opening round defeat to Sean McDermotts while for Casements they will take on Naomh Padraig in the final game in Group B knowing that they will need a win to safely secure passage into the semi-finals after their opening round draw with John Mitchels.

Unbeaten Warwickshire will be looking for a return to the final when they take on Gloucestershire (throw-in currently set for 2pm on Sunday at Pairc na hÉireann).

In the other semi-final currently set for Saturday, it’s a showdown in York between the defending champions Scotland and London, who played out a closely fought contest in Clydebank two weeks ago in the group stages that went the way of Scotland.

The semi-final winners will meet in a fortnight’s time on the weekend of the July 24/25.