Seanie Boyle’s close-range free with two minutes to go ultimately proved the difference as a bumper crowd witnessed sixty minutes of nail-biting, edge of the seat championship football on a hot afternoon at Páirc na hÉireann.

For Casements, it was a case of clinging on to what they’d amassed in the opening half.

Their only score from play in the second-half proved a crucial third goal by Mark O’Hare, Boyle tapping over two frees in what was otherwise a serious defensive shift that committed to keeping a resurgent Brendans side at bay.

For Brendans it was another semi-final loss by one point and they were left to rue a slow opening half that they managed to retrieve by hauling themselves back level with five minutes to go, only to fall short when it came to the crunch – their twelve wides proving too expensive on another day of frustration.

In fact, Brendans made the ideal start when Mikey McAleer was brought down for a penalty converted to the net by Declan Hayden.

However, Casements settled well and hit the front when a Boyle effort bounced back off the post and into the arms of an incoming Tom Massey who tucked the ball into the Brendans goal.

Points from Aidan Cavigan and O’Hare extended the lead while at the other end Tom Bryce stood up strong to deny Luke Rabone one-on-one.

Moments later the ball shifted down the other end where a fantastic, incisive pass found midfielder Martin McAndrew who rocketed the ball to the corner of the net.

It was a superb goal at a key moment in the match, one that Brendans almost cancelled out at the start of the second-half when Oisin Coffey drilled an effort narrowly over Bryce’s crossbar.

Once again a near miss at one end was compounded at the other and once again a looping effort bounced off an upright where an alert Casements forward pounced, O’Hare extending the Casements lead to six. 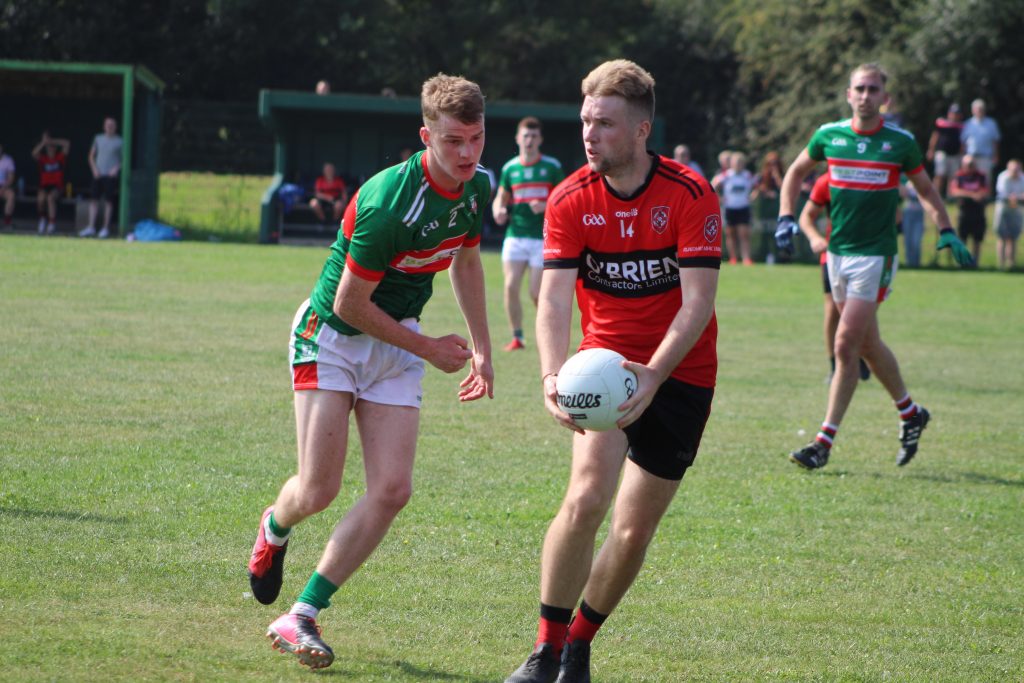 Brendans had to throw caution to the wind now, they started with Michael McGettrick tapping over a free before releasing substitute Louie Monaghan for a score from open play.

Casements kept them in check with a Boyle free at the other end but the pressure was building from Brendans and when McGettrick cut in from the left to drive for goal it took a sensational diving save by Bryce to flick the ball onto the woodwork and away.

There were more heroics straight afterwards when Casements somehow kept Noel McDaid’s flick from a forty-five finding the net but the gap was reduced to three thanks to scores from Coffey and McGettrick (free).

It looked as though that golden goal would evade Brendans until a dropping ball fell into McDaid’s hands and the full-forward superbly fended off his marker to fire the ball beyond Bryce and bring the sides level.

With only a few minutes left, a place in the final was up for grabs and this semi-final became less a footballing contest and more a test of sheer nerve.

Both teams had their chances to win it, both sides couldn’t make the most of scorable opportunities.

In the end there could only be one, Boyle stepping up to a free on the right to tap over the winner to ensure Casements will go back for another shot at their first senior title since 2005.

While Dean Bonner excelled at half-back and PJ Molloy was superb again at corner-back, McAndrew was the engine behind his side's success, capping it with a thunderbolt of a goal.