LIAM SCALES scored a stunning strike as Celtic overcame a spirited Raith Rovers to seal their place in the quarter-finals of the Scottish Cup.

The 23-year-old Wicklow native opened the scoring after 23 minutes, setting the Hoops on course for a 4-0 victory.

The left-back's first touch from a Tom Rogic pass took the ball away from Raith's Aidan Connolly, before he rifled a left-foot shot that cannoned off the post and into the net.

A fantastic strike in off the post from the edge of the box to put @CelticFC in front 🍀 pic.twitter.com/tSxVrC0ng2

Speaking to Premier Sports after the game, Scales paid tribute to his Australian teammate for teeing him up for the opener.

"I just stepped into space and Tom found me and I knew that if I had a good first touch, I'd have the room to get a shot away," said Scales.

Celtic laboured at times against their second-tier opponents but a Giorgos Giakoumakis goal midway through the second half after good work from Reo Hatate and Jota opened the game up.

Scales' goal is his second for Celtic after scoring on his home League debut in December.

The former Shamrock Rovers player has had to bide his time for chances, but with Celtic still in contention in the League, Scottish Cup and Europa Conference League, he has seen more opportunities come his way as Ange Postecoglou rotates his squad.

Before his goalscoring League debut against Dundee United on December 5, he had made just three second-half substitute appearances since arriving in the summer. 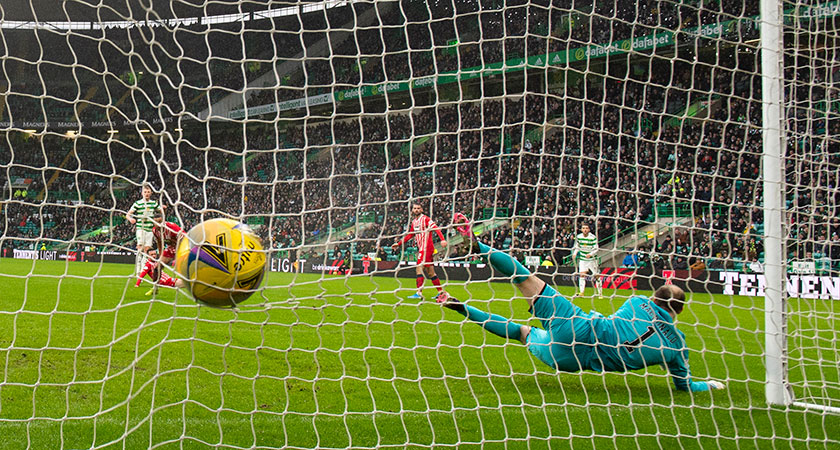 However, since the United game, he has featured in eight of Celtic's 14 games, starting in seven of those.

Speaking after the Raith game, Scales said the quality of the squad and competition for places was a bonus for Celtic.

"The standard of player in the squad is unbelievable so we're all competing for 11 jerseys," he told Premier Sports.

"At the end of the day, people are going to miss out but I'm happy with how it went today.

"It's unbelievable when players are getting tired and you can freshen it up with unbelievable quality — it helps a lot to see games out and finish teams off."

The draw for the Scottish Cup quarter-final will take place after the final fifth round tie between Peterhead and Dundee on Monday.